A strong storm is moving through the Midwest and lead to a drastic temperature spread, showers, storms, and snow... with more change to come. Friday a warm front set up shop in the Midwest and made a big difference from north to south.. Take a look at the temperatures across the country at 7 pm Friday...

A freaky Friday! 90s in Texas... 20s in the Dakotas... wow! Taking a closer look.. my local area had quite the temperature gradient.

No doubt there was instability near this boundary and showers and thunderstorms lit up across the Central US. These re the storm reports as of 10 pm Friday - 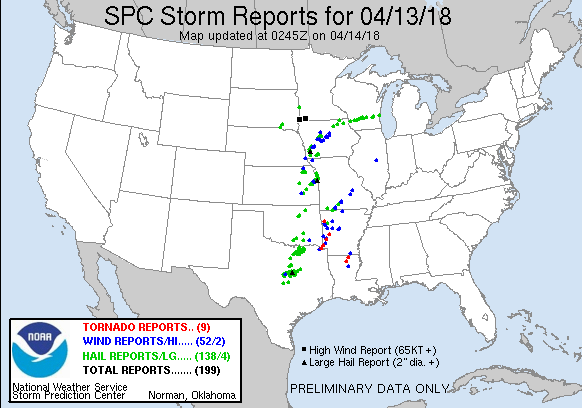 A few tornadoes were reported in Louisiana and Arkansas but the primary threat was hail. Now while storms were going on in spots... a blizzard was ongoing to the northwest. Truly a spring storm with multiple threats -

Blizzard, Warnings collided with Severe Thunderstorm Watches and Tornado Watches. The severe threat will shift east over the weekend and the Midwest will turn colder. Temperatures will be much colder and well below normal Saturday afternoon.

And even colder Sunday.

Some areas that were dealing with storms today already saw the change to snow Friday night. As temperatures drop further south there will be a transition to snow across much of the Upper Midwest.

This storm will continue to produce blizzard conditions in South Dakota, Nebraska, northwest Iowa and southwestern Minnesota with snow showers extended into northern Missouri and Illinois. Here's a look at the GFS snowfall through Sunday night - with lots of moisture available there's some big numbers for April!

A full on blizzard in April in some spots! Here's some forecasts from area weather service offices -

We went from beautiful spring weather and temperatures in the 70s and 80s to strong storms with hail in just a day... and now snow is on the way for the weekend. What a wild 48 hours of weather with more to come....