The weather in the Midwest is well known for being fickle. One of the more dramatic examples is summertime rain. With the weakening upper level winds in July and August widespread rains are often replaced by spotty instability driven storms. While some areas get a good rain, others may not get a drop only a mile or two away. In the graphic below you can see over a 2 week period how some parts of Iowa measured 5-8" while other areas less than a county away had less than .0.01". Luck of the draw!

Such is the nature of summer rains in the Midwest. I've even heard recently from some farmers who were begging for the rain to stop a month ago that are now hoping for it to return, albeit in a more manageable way. This next graphic shows how fast soil moisture conditions can change in the hot days of summer when the rains are less frequent. This is for the period June 30th to July 9th.

If you're one of those looking for some rain to settle the dust I don't have a lot to offer. There is a chance in some areas late Friday night or early Saturday but in general the pattern is not supportive of heavy precipitation over most of the central Midwest for at least the next 7-10 days.

The EURO shows this for 7 day rainfall totals.

In the precipitation departures you can see the overall dryness that exists from Texas and the southwest through Iowa and northern Illinois the next 7 days.

This is the upper level pattern that creates subsidence in my local area. That causes the air to sink and compress. When you do that to a gas (which air is) it heats up.

Such a flow at 500mb also supports a prolonged period of very warm temperatures. Here's the day 5-10 departures.

The EURO ensemble even shows 10 consecutive days with highs in the 90s here in Cedar Rapids. How fun will that be!

Last but not least we are still expecting a hurricane to develop over the Gulf that moves into Louisiana this weekend. Here's the center moving onshore as depicted by the 3k NAM.

Water temperatures are very warm in this area which is fuel for the storm to intensify the next couple of days.

Here's some of the intensity forecasts from various models. None show anything greater than a category 1 storm.

Some forecasts of where the storm will track after landfall. The general trend is up the Ohio Valley. 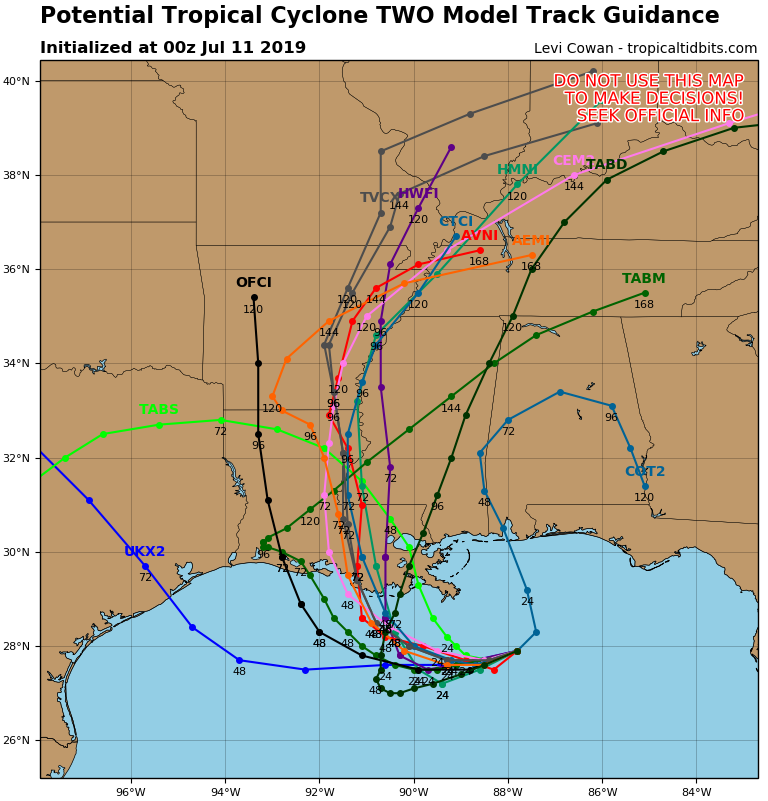 To be honest, the hurricane is about the only exciting aspect of the weather the next week. High and dry should cover it in my area through Friday. Roll weather...TS