WINTER STORM SET TO SPOOK PARTS OF THE MIDWEST...

A thank you from Terry,

Hello everyone. I've managed to get a few more subscribers together as the push continues to meet my fund raising goal. (only 117 more to go). As you know this is a voluntary subscription fee and it's very special when any of you digs into your funds out of respect for the product. Going forward, my goal is to be my own boss and control my future without the demands and constraints of the corporate world. I want to grow this site, add new features, and share my passion for weather with you. So it is that I ask for a voluntary fee of $12 dollars a year ($1 dollar per month) to make it happen. The future of the site is dependent on your contributions. We hope you see the value and hard work that exists in the daily content. Rest assured there are new features that are in development that I think you will enjoy. Thank you so much for your consideration and help. To subscribe click on the secure green box below. Roll weather...TS

THE HALLOWEEN STORM AND ITS BAG OF TRICKS

Well, here we are Wednesday October 30th. Normal highs are typically in the range of 55-60 around the central Midwest. We'll be far from that as an early "winter" storm comes to life over the region. For some the impacts will mean minimal snow but abundant cold. For others, it's the double whammy of snow and cold that will make this a memorable Halloween.

Here's the satellite at Tuesday night showing energy diving into the Rockies drawing moisture north from the Gulf. The upper air low over Colorado has a large reservoir of chilly air to work with and as that battles the warmth over the east that puts the Midwest in a vulnerable place.

In this image below you can see the water vapor anomalies and they are dramatic with the warm moist air in blue contrasting vividly from the cold dry air in the reds. In the middle you have the fight going on along the baroclinic zone. That's where storms go to play.

This storm is just getting its act together as it enters the Midwest and that is going to help across much of Iowa as the moisture and deformation band are slow to get into the show. However, things really come together when the system reaches the Mississippi and then the classic snow band to the NW of the low kicks in. Northern Illinois will pay the price for that with the heaviest snow expected there. This is the closed 500mb upper air low as it is reaching peak intensity. 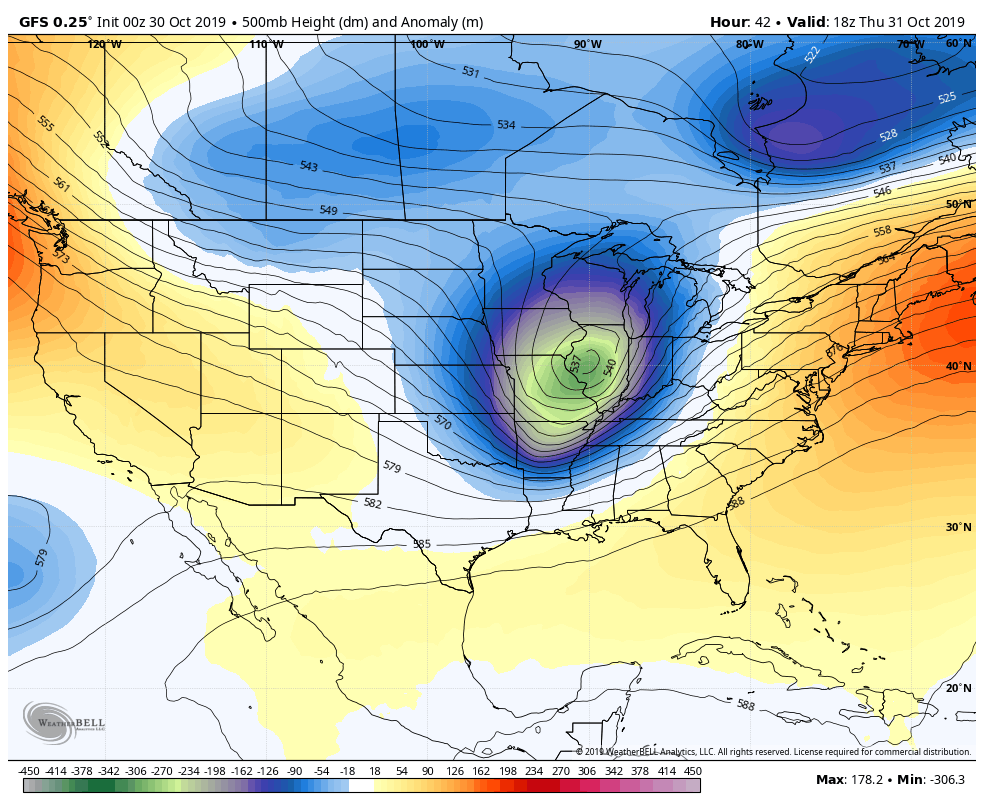 That brings me to the latest snowfall forecasts. I will show the EURO last as I think it is the model with the most accurate depiction.

This is what the GFS shows. This model has been consistently the snowiest and the furthest NW on the heavy snow band. I still think it remains too far northwest and is an outlier.

This is the 12K NAM. I think it's more reasonable than the GFS with the really heavy snows in Illinois but again too far north on

The CANADIAN came in this way. It came in higher on totals this run but it remains the furthest southeast on the heavy snow band. Good to see it getting up to speed otherwise I like its recent consistency in placement.

That leaves us with the EURO (or as I like to say, the king). What say it? Actually it's similar to the EURO just lower on the amounts and I buy that. I think this is going to be the winning recipe. I expect the 1-2" totals to run southeast of a line from Lamoni to Cedar Rapids, Dubuque, and on to near Madison. 2-4" from SE Iowa to near the Quad Cities. Then the big band of 6-10 from about Quincy to Peoria and then to the west suburbs of Chicago.

When this storm is over there is the potential that some parts of Missouri and Illinois could set all-time historic records for October snowfall. Should that happen this would be the 3rd different storm this fall to set snowfall records and it's not even November!

As I've mentioned a few times most of Midwest will hold in the low to mid 30s for highs on Halloween likely making it the coldest on record for high temperatures, especially where it snows. A fair amount of trick or treaters will be tromping in snow with temps in the upper 20s to low 30s and wind chills near 20. Bah humbug!

Once last thing, the EPO looks as though it will stay in a negative phase through mid November so it's likely some form of cooler than normal weather will dominate the next couple of weeks. The pattern also looks less active and wet than it has been once this storm departs which should be a plus for farmers.

I sure do think the potential is there for this winter to be one we'll be glad to put behind us come next spring. Roll weather and be sure to check in from time to time today for the latest trends on this early winter storm. TS