THE POWER OF THE LAKES...

If there is one thing I have learned about spring (say April, May, and early June), it's that Great lakes enhanced "back door" cold fronts are serious players that can stop warm air in its tracks. All you need is a big high pressure situated over southern Canada and an east/northeast wind (a common sight in spring) and the table is set for some refreshingly cool, dry weather...sometimes far more than wanted!

Here's the issue. deep water just does not warm up like air or land masses (a little thing tied to specific heat). That means long after the ice and snow of winter is gone, the Great Lakes remain cold. Here's proof. June 2nd water temperatures on Lake Superior are still in the upper 30s to low 40s.

Lake Michigan is a bit better being further south but even here, 50s to near 60 is about as good as it gets.

These are the water temperatures of all 5 Great Lakes as of June 2nd.

When you get into a pattern where the jet buckles into NW flow such as this over the coming weekend, my area is setting prime for what's known as "back door front". It gets its name from the fact its cool air backs in from the northeast instead of the more traditional west.northwest direction.

Why? Because this type of pattern allows a surface high to build just north of the Lakes. The counter clockwise circulation brings cool dry air southward out of Canada where it is further enhanced by the chilly waters of the lake. You can see the surface set-up below.

You can also note by the temperature departures this weekend how that holds the heat off at a safe distance to the west.That is until the high departs and winds can return to the south. It looks to me like this push pull pattern will be in effect for much of the next 2 weeks. That means 2 or 3 toasty days and then 2-3 pleasant ones and so forth and so on. Eventually the lakes warm to a point in mid to late summer where the overall effect is minimized...that is unless you are close to the shoreline in cities like Chicago or Milwaukee where a hot summer day can turn chilly in a hurry with a wind shift to the east.northeast.

The first of 2 back door fronts will impact my region over the next dew days. The first generated thunderstorms last night that are in a decaying phase early Wednesday as the cold pool associated with the storms aids the southward progression of the front. By late Wednesday afternoon it should be through all but far southeast Iowa and WC Illinois. That means any lingering morning storms will die and then new ones which form in the far south towards evening will quickly depart leaving my area with quiet conditions overnight. A couple strong storms are possible early in my southern counties before the storms exit but the bulk of the strong storms will be in Missouri and central Illinois. Here is the SPC outlook for Wednesday. 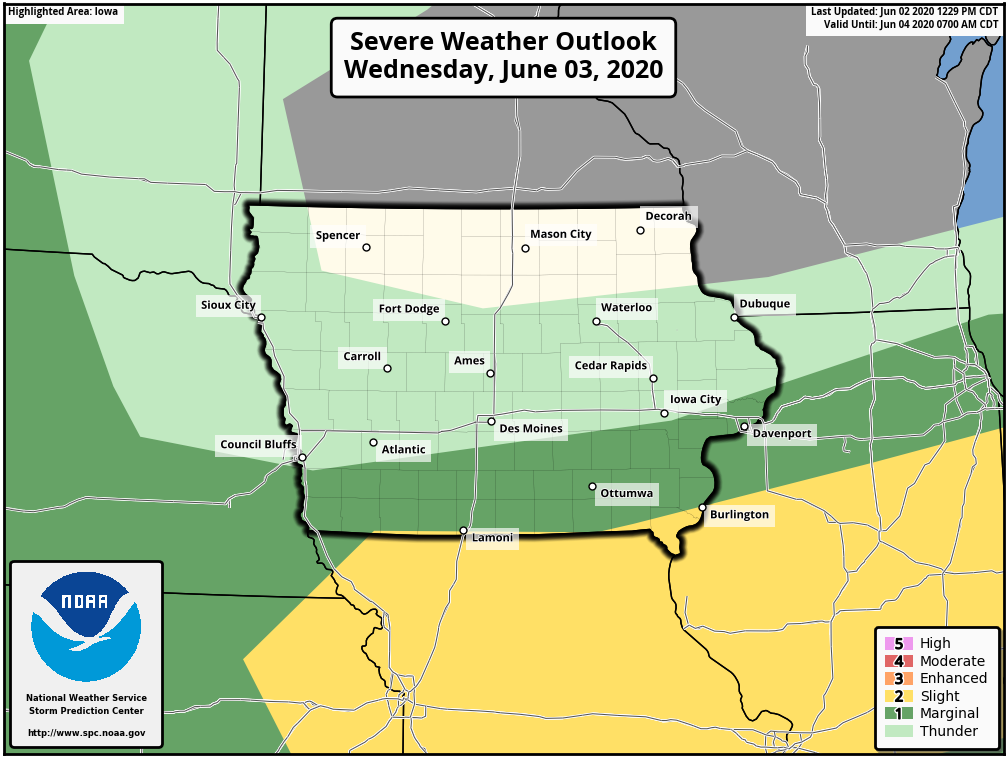 Temperatures will also drop from highs that over performed and literally exploded to 100 degrees at Spencer, Iowa, to 99 in Sioux City, and 96 at Waterloo. These are the 4:00 pm observations Tuesday afternoon. Wednesday's readings, while still warm will be a good 6-10 degrees cooler. Highs both Wednesday and Thursday should be in the low to mid 80s.

The next back door front clips the region with the possibility of more storms late Thursday night or Friday morning. Then a noticeably cooler and drier air mass comes in on east winds for the weekend. Highs both Saturday and Sunday should be in the mid 70s. Look at the dew points, the dry flow out of Canada drops them down around 50.

These dew points are 15-20 degrees lower than today and what we will continue to see through Thursday. All things considered, it looks like a change to a pleasantly cool dry weekend is ahead thanks to the Great Lakes and the cooling effects of its water. We'll take it! Roll weather...TS