THE LONG AND SHORT OF IT...

You may not have noticed it Wednesday with 14 hours and 43 minutes of daylight, but the days have been getting shorter for a month. Since the beginning of July the length of our day has shortened by 27 minutes. Sunset occurred at 8:45 pm July 1st and on Wednesday it had shrunk to 8:34 pm. Sunrise has backed from 5:35 to 5:51 am.

By the official start of winter on December 21st (the shortest day of the year), the length of our daylight will be down to 9 hours and 7 minutes. The Sun will rise at 7:31 am and set at 4:38 pm. If you haven't figured it out, the lack of sunshine and its less direct rays are the reason we get progressively colder and colder over the next 6 months.

Now, here is some depressing news for those of you who dread winter. Due to the shorter days we have now passed the hottest point in our summer. The average high temperature which peaked recently at 86 is now down to 85 on its way to 27 in mid-January.

What's really interesting is that our longest day of the year is roughly June 21st. That's the day we get the most possible sunshine. In theory that should make it the hottest time of the year. However, that's not the case and the reason why is the fact the earth is more than 93 million miles from the Sun. It takes approximately a month for the Suns energy to reach the earth so there's a lag time of 3-4 weeks between the longest day and the hottest time of the year. Fun with science!

Okay, that's today's lesson in thermal dynamics. Since there's no test you all passed. A gold star for everyone!

As you all noticed it Wednesday, the atmosphere has resorted to a kinder, gentler mood recently thanks to high pressure. Both temperatures and humidity were at comfortable levels and are expected to remain there until Friday afternoon. After that another push of very warm sticky, air arrives. This could scare up a few thunderstorms Saturday but there's not much consistency among models with some keeping a stout CAP in place effectively killing the threat. Not much to do now but broad brush the threat at 30 percent.

Sunday is the day to circle for impactful weather as headlines for heat are likely. Heat index values on both the EURO and GFS exceed 100. The most ominous scenario for my area is currently the GFS which has heat index numbers up around 105-110 degrees. That is based on dew points that it shows reaching the low 80s. That puts them in the 99th percentile and while that is possible, it's probably too high. A more reasonable (but still extreme) level is the upper 70s. Whatever, it's going to get rough again Sunday and confidence is high on my part that heat advisories will eventually be issued, especially in the southern 2/3rds of my area. Here's what the GFS has for heat index values Sunday. 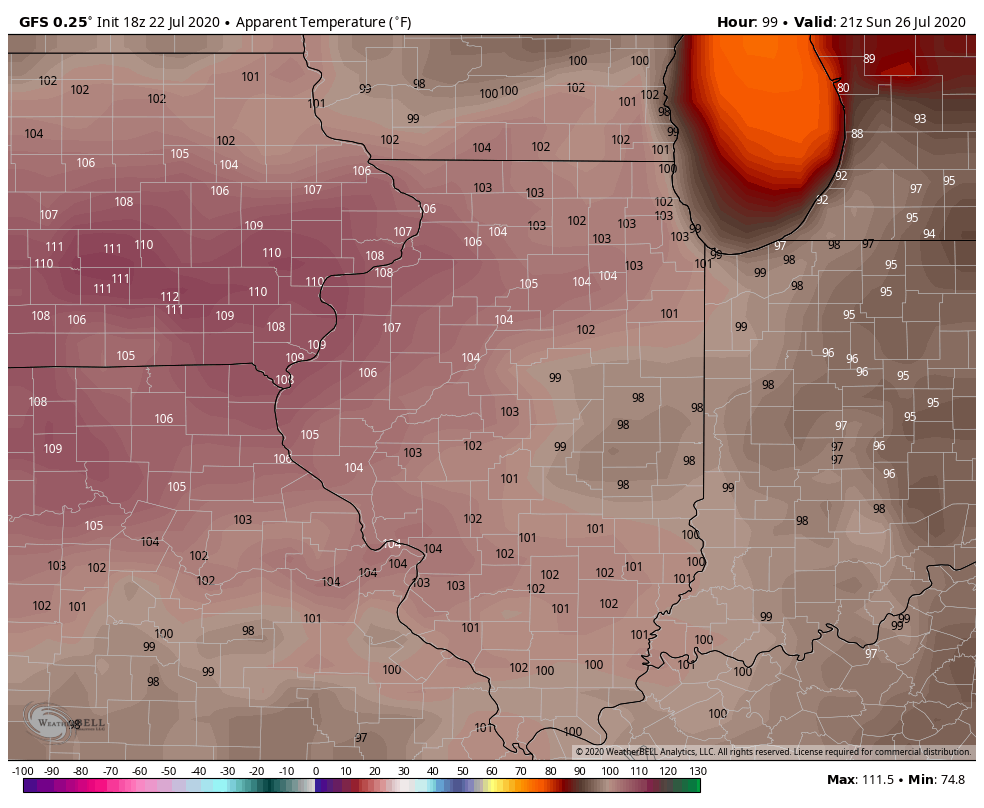 Late Sunday afternoon or evening thunderstorms will be possible as a cold front comes to the rescue and beats the heat back on Monday. Water vapor and instability should be such that if the timing of the front is right and the CAP can break, a few strong storms and locally heavy rains will be possible in the more robust updrafts. It will be a couple more days before we can dial in on that potential.

One thing that does stand out is the potential for a refreshing cool-down next week behind any storms and the passage of the cold front. The GFS shows this for temperature departures next Monday through Friday. Maybe a bit on the cool side but I think it has the right idea with significant cooling anticipated. Something to watch in the next 24-48 hours.

That's the long and short of it for this post. Here's to the sun and those long hazy lazy days of summer. Roll weather...TS