I doubt this will surprise many people but 2020 was a horrible year for natural disasters. According to NOAA, there were 22 weather/climate related disasters with losses exceeding $1 billion each impacting the United States. These events included 1 drought, 13 severe storms, 7 tropical cyclones, and 1 wildfire. Overall, these events resulted in the deaths of 262 people and had significant economic effects on the areas impacted. The 22 billion dollar events in 2020 shattered the previous record of 16 set in 2011 and 2017. The 40 year average since 1980 is 7 such events per year.

As you can see the majority of these events occurred between March and October and are tied to severe weather such as tornadoes, flooding, and tropical cyclones. Wild fires have also played a significant role

Severe weather such as the recent derecho and numerous tornado outbreaks produced about 15 percent of the damage costs since 1980. Tropical cyclones (hurricanes) lead the way comprising 53.1 percent of the dollar figure. You can see the breakdown below.

Here's a look at billion-dollar disasters by the numbers over the past 40 years.

In the graphic below, which includes flooding, severe storms, as well as winter storms, Texas is the clear winner when it comes to billion dollar disasters since 1980. However, the Midwest is well represented with Illinois ranked second in overall frequency.

Below is a breakdown of the 2020 events, a year which was the 5th warmest in United States history.

Of course, the August 10th Iowa derecho contributed substantially to the 2020 damage total with 11 billion dollars from that event alone according to NOAA. That makes the August derecho the costliest thunderstorm in United States history.

I will take this opportunity to mention that I only have 32 copies left of my book on the most expensive thunderstorm in United States history (11 billion dollars in estimated damage). This will be the final printing. If you are interested in having the most authoritative account of this extreme event I would suggest you act now. Don't miss this opportunity to own the weather story of a generation. You can order yours at derechobook.com

Hey, it's Friday and the past 10 days I've been pounding home the idea that our first 60 degree highs of 2020 were on the way. So far the trend remains solid but the first crack at that threshold won't come until Sunday, and then Monday much of the central Midwest will be in on the act. To give you an idea what the EURO is thinking, Here's its 10 day meteogram for Cedar Rapids. 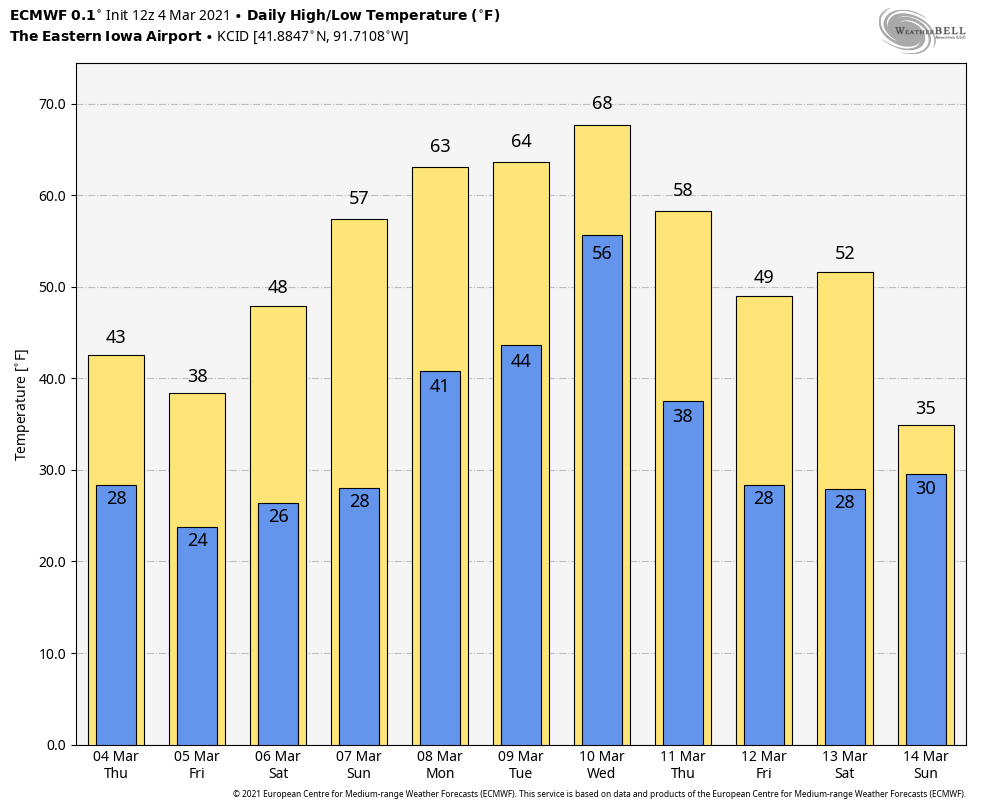 Factors that will determine just how warm we end up will be snow cover, clouds, and eventually precipitation Wednesday. At this point models are adamant that by the end of Sunday most of the snow (aside from piles) will be gone in the north and bare ground will prevail over the south, especially south of I-80. Assuming that's the case, there should be enough sunshine Monday and Tuesday for a potential range of highs of 60-65 for much of my area.

Wednesday, a cold front will approach from the west and by then moisture will be in place for clouds and potentially rain. The speed of the front and extent of any rain will be a big driver in how warm this day ends up. I still think this turns into another day of 60s degree highs.

As it stands now, these are the daily temperature departures the EURO shows for Monday-Wednesday.

One important trend I've noticed over the past 24 hours is that the mid-week system is not as phased which means it's not as intense. The reduction in dynamics and increased speed of the cold front has lowered the potential for heavier rains in my area, especially west of the Mississippi. It's a bit premature to say things might not slow down again going forward but the latest guidance indicates the threat is now just east of my local area.

One thing is for sure, moisture levels like we haven't seen in months are on the way. Available water vapor (PWAT's) is likely to exceed 1inch as far north as Minneapolis Tuesday night. That's big for early March.

That moisture ahead of the advancing front will create instability for some part of the region Wednesday as evidenced by the skinny CAPE on the GFS late in the day.

This is the K index which is used to measure the likelihood of thunderstorms in a given area. Values of 30 or greater indicate a strong chance of convection. This graphic represents the potential for storms at 6:00 PM Wednesday.

As for precipitation potential, models have come down substantially due to the reasons discussed above. Here is the GFS rainfall totals through Wednesday night.

This is the EURO for the same period.

To wrap this up, after a chilly day Friday the door opens to warmer temperatures as the weekend unfolds. Highs will steadily climb over the weekend culminating in highs in the 60s Monday through Wednesday. If things go well, some spots may enjoy that level of warmth as early as Sunday. Needless to say, we are on the road to some fine weather in the days ahead. We've earned it. Roll weather...TS