A stout cold front has passed bringing a harsh reminder that winter is still on life support. Record cold highs and lows are on the table over the next 24 hours. Despite the strength of the front (true to form with the season so far), no severe weather was generated by its passage and the only place that could even scare up thunderstorms was my far southern counties.

One of the issues in question in my last post was how much rain would fall and where on Thursday? The operational models such as the EURO and GFS did a poor job as they showed significant amounts over my central counties. The EURO indicating 1.71" in the Quad Cities and over an inch in Iowa City less than 18 hours before the event. (see below).

WEDNESDAY NIGHT RAINFALL FORECAST ON THE EURO FOR THURSDAY

In reality, the reports I've obtained showed 0.18" in the Quad Cities and 0.20" in Iowa City. That's a pretty big bust. The GFS wasn't much better as you can see in its forecast below.

WEDNESDAY NIGHT RAINFALL FORECAST ON THE GFS FOR THURSDAY

Here's the Doppler estimates of rain in Iowa through 8:00 PM Thursday. 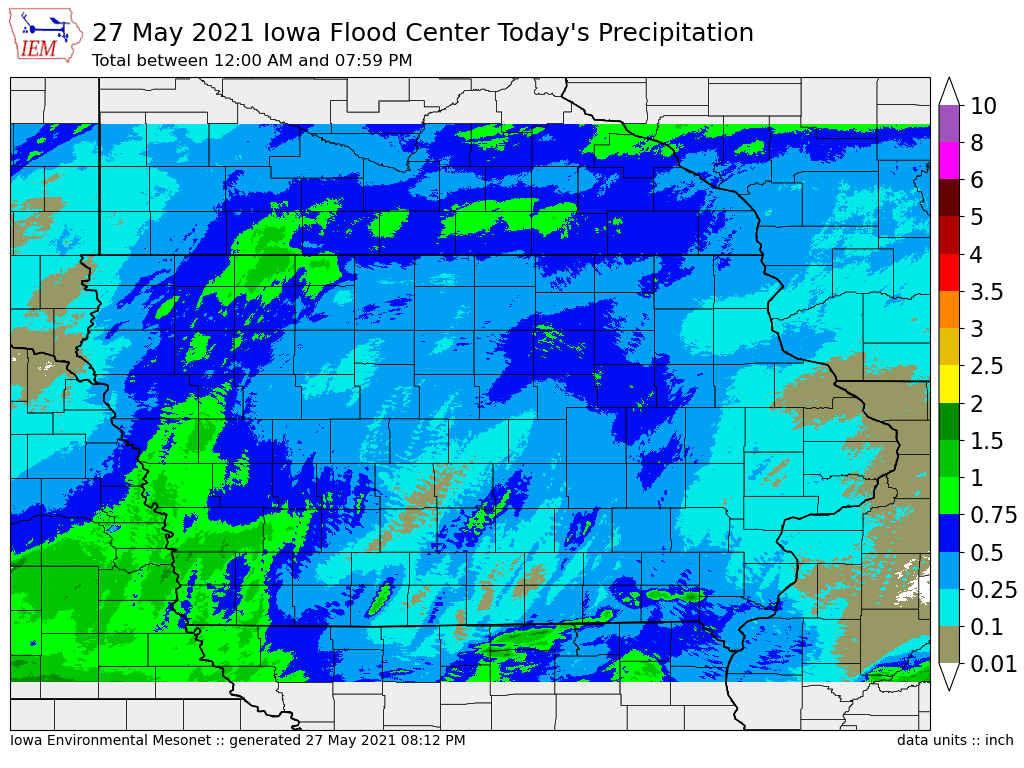 As I indicated in my post Wednesday night before any rain fell, the convective allowing models such as the HRRR and 3K NAM (which I've posted below) were showing an entirely different result with amounts in my central counties and those two cities dramatically less (no more than 0.16" in the Quad Cities). Their high resolution composition and ability to forecast convective trends, made the difference and I indicated that I thought their idea had merit. I'm not at all surprised they caught the trend. This is precisely what these short term models were designed for and it's good to see they performed far better than their counterparts. Here's what they showed for rain Thursday which verified nicely.

WEDNESDAY NIGHT RAINFALL FORECAST ON THE 3K NAM FOR THURSDAY

Moving on, that brings us to the next 24 hours and temperatures like I hoped I wouldn't see again until October. Let's start with Friday, a day that promises low clouds, brisk NE winds, and at least some scattered light showers. That's a recipe for cool temperatures anytime of the year but in this case, the air mass is supportive of what I would classify cold temperatures. These are 1:00 PM readings Friday on the 3k NAM. Ouch! 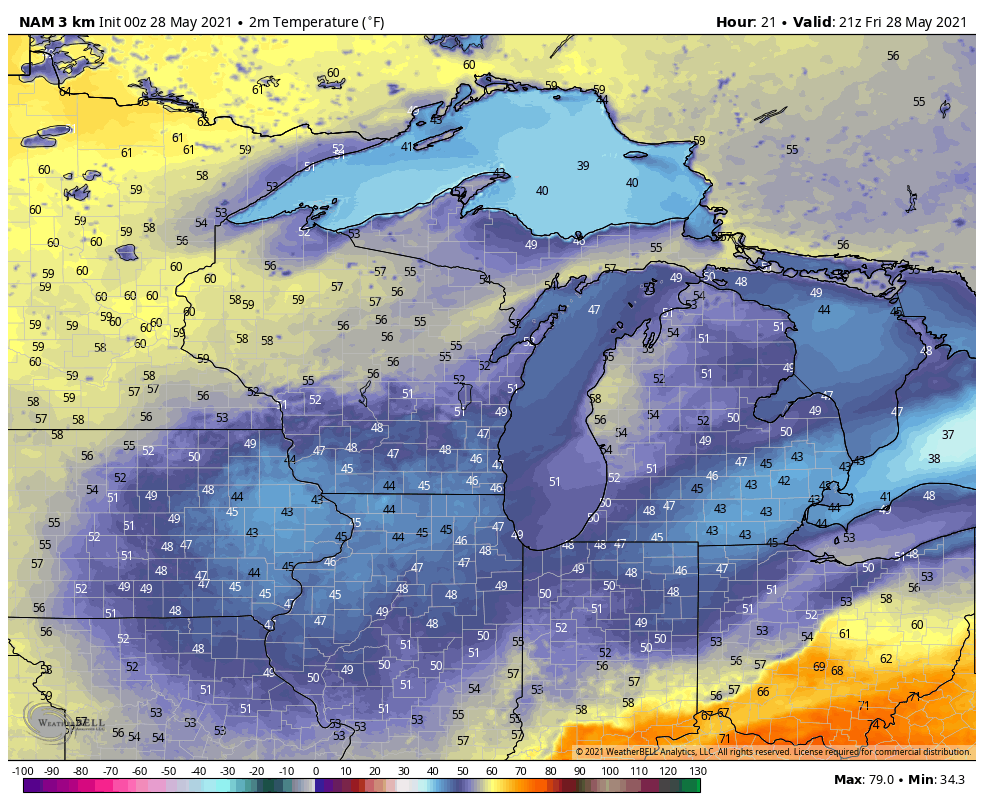 For perspective, these temperatures are 30 or more degrees below normal and near mid-March levels.

Skies are expected to clear quickly Friday evening with diminishing winds. That's the recipe for cold nights (especially after a cold day). Fortunately the nights are short this time of year which cuts cooling time. Even so, I think there is a good chance a few spots could reach 32 in the colder low lying valleys, especially north of I-80. I expect an unwelcome visit from Jack Frost and frost advisories for at least the northern half of the area are likely. The GFS shows lows that look like this Saturday morning.

The coldest model is the 12K NAM but I suspect (and hope) its several degrees too cold. Look at the 20's it's depicting north of HWY 30. 25 around McGregor!

After the cold start Saturday, the strong late May sunshine should do its thing and get readings into the low 60s for highs. Sunday may see a few more clouds but again pleasantly cool dry conditions prevail with mid 60s common. Those temperatures are still 10-15 degrees cooler than normal but way better than Friday.

Memorial Day itself is still a tad shaky with the GFS bringing in clouds and rain by afternoon holding highs near 60. The EURO is far friendlier keeping the rain at bay and pushing highs into the upper 60s. I am hoping the strength of the dry air will win the day keeping things dry. However, there could be enough clouds by afternoon to chip temperatures back several degrees into the mid 60's. For now that's the way I'll play it with medium confidence. More on that tomorrow.

All right, get out the coats and hoodies, you'll be glad to have them today. Give thanks for what you've got, move on, and by all means have a fantastic Memorial weekend. My respects to all the men and women who have freely given and paid the price for their service to this country. Peace be with us all. Roll weather...TS