“This is a big day for NOAA and the state of weather forecasting,” said Ken Graham, director of NOAA’s National Weather Service. “Researchers are developing new ensemble-based forecast models at record speed, and now we have the computing power needed to implement many of these substantial advancements to improve weather and climate prediction.”

Enhanced computing and storage capacity will allow NOAA to deploy higher-resolution models to better capture small-scale features like severe thunderstorms, more realistic model physics to better capture the formation of clouds and precipitation, and a larger number of individual model simulations to better quantify model certainty. The end result is even better forecasts and warnings to support public safety and the national economy.

The new supercomputers will enable an upgrade to the U.S. Global Forecast System (GFS) this fall and the launch of a new hurricane forecast model called the Hurricane Analysis and Forecast System (HAFS), slated to be in operation for the 2023 hurricane season pending tests and evaluation.

The devil is in the details but there are strong signals that a ring of fire pattern may begin to take hold over some portion of the Midwest in the coming two weeks. The "ring" is a common summer set-up where heat and humidity forms an axis of instability on its northern edge. That's the spot where forcing breaks the cap, especially at night allowing thunderstorm complexes to form. These rotate around the heat dome and are know to be heavy rain producers. They can also produce generate severe weather (generally strong winds as opposed to hail and tornadoes).

July 9th you can see the GFS sticking the ridge over Missouri with the active storm track to its north over northern Iowa and southern Minnesota (the firing grounds if you will).

You can see in the forecast temperature departures the clear gradient between below normal temperatures in Minnesota and much above normal readings in SW Iowa. 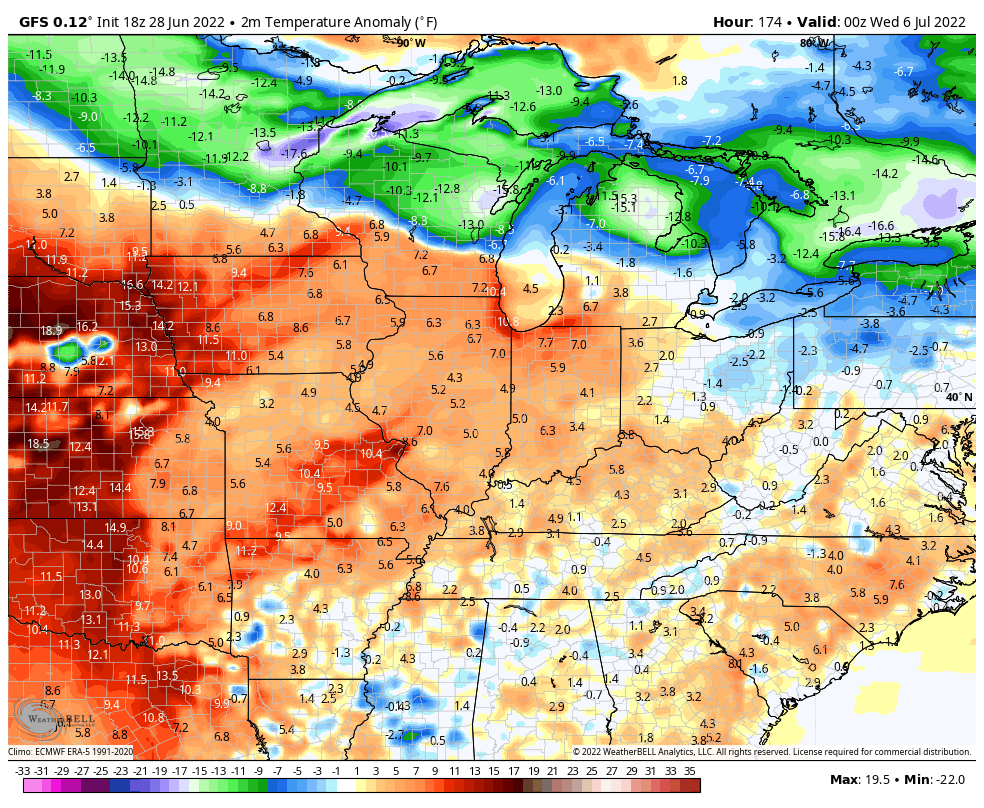 On the northern edge of the heat water vapor of 2 or more inches is pooled over Iowa and northern Illinois.

That translates to dew points in the upper 70s to low 80s. Very sultry air aided by evapotranspiration from maturing crops.

The very warm and unstable air becomes extremely unstable during the day. However, warm air aloft creates a cap that suppresses thunderstorm development. However, at night as the upper levels cool and the low level jet kicks in and intensifies, thunderstorms like to fire on the northern edge of the CAPE (instability gradient) which is forecast to be near my counties north of I-80.

You can see in the 6-10 and 8-14 day outlooks how the region is forecast by the Climate Prediction Center to be on the northeast edge of the heat.

Notice how above normal precipitation is depicted in both of those periods. That's a direct result of the ring of fire vacillating around edge of the heat.

The U.S. Hazards outlook over the 3-7 day period shows the pattern evolution with the heavy rain potential on the northern edge of the heat and humidity which is expected to be excessive just to the southwest.

The EURO weeklies control shows this for precipitation totals the next 18 days. That heavy rain swath in deep reds represents the ring of fire. Where that sets up will determine where the heavier rain ends up falling. Models of course can't depict that precisely but they do show a strong trend for some part of the Midwest to experience heavy rainfall. I will also note that similar to what happened last Friday night, one MCS can dump as much rain as the model indicates over the 18 day period. Amounts within the heavy axis (wherever it sets-up) could be significantly more than what's shown.

For the most part the next couple of days look dry, warm but not particularly humid. Highs should get into the mid to upper 80s Wednesday (near 90 south) and the upper 80s to low 90s Thursday. Pretty typical stuff!

Thursday night and Friday a front drifts across the region with the potential of producing at least scattered showers and thunderstorms. Forcing is not great and timing less than optimal. Throw in the fact moisture is marginal by late June standards and coverage looks kind of spotty. The front departs the south Friday morning and appears headed to Missouri where it will stall for a couple days. That implies most of the showers and thunderstorms Saturday and Sunday will remain south of the region. There is a chance a few could sneak into the south late Saturday night or early Sunday but I'm not sold on that idea.

Sunday night and the 4th of July, the boundary down south makes a move north as a warm front and that looks to be the time when thunderstorm chances will increase substantially. Mesoscale details are unknown at this distance but will be an important ingredient to watch as they will set the stage for where and when the storms occur. Typically the best rain chances are early in the day and then again towards evening and the overnight hours. More on that in the days to come!

Thanks for visiting and roll weather...TS