SOME CRAZY WEATHER, MUST BE CLOSE TO HALLOWEEN...

Wind, rain, and a wide range of temperature extremes sums up the weather around the Midwest the past couple of days. The most obvious change for many Friday was the return of much colder air. Look at these highs Thursday, a range of nearly 40 degrees. It was even more extreme for the state as a whole. The range from NW Iowa to SE Iowa was 35 to 81 (46 degrees!)

Friday that warm party in SE Iowa was over with hangovers for everyone. Check out the 24 hour change. Most places in SE Iowa near and south of I-80 were 30-35 degrees cooler by nightfall.

At least the rain ended with the arrival of the cold air. It was a wet system though with 2 day rainfall totals of 1-3" common. A few places came in over 5" in NE Iowa. The heaviest over the last 24 hours ending Friday was in the NW half of my area where the numbers looked like this. 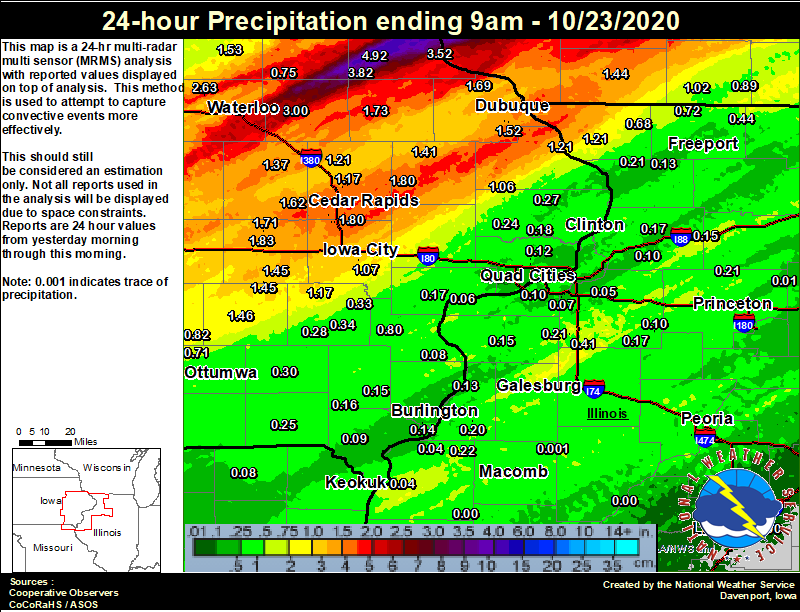 Both Saturday and Sunday look to be chilly days with considerable cloudiness. Highs both days should end up close to 40 which is a long way from normal.

The real challenge in this forecast cycle will be precipitation late Sunday into early Monday morning. Recent trends are for colder and drier air and that does two things. One, the dry easterly winds will make it tougher to saturate the atmosphere and get precipitation to the ground. Amounts have gone down, especially on the GFS. The other issue is that with colder profiles the chances are what precipitation does fall in my area will be largely be snow. Here's what the models show for totals. I will comment below.

Overall, there is good consensus that any accumulating snow it most likely to be found in Iowa as opposed to Illinois where the dry air is a real problem. As you progress west away from the Mississippi amounts slowly increase as do the odds of any accumulations. The GFS which has done a fine job the past week handling the depth of the cold air and its consistent trend for less and less snow in my area is concerning. If it's on the right track, and I'm leaning that way, little if any snow could very well be the end game. As much as I respect the EURO it's snowier solution in eastern Iowa is a bit suspect to me at this time. I would not be surprised to see amounts come down on that model later Saturday.

The bottom line is there is no way of knowing which solution is correct and with the luxury of another day before any flakes would fly it is prudent to wait another day to see if we can get better model consensus. At this moment I am leaning more toward what the GFS which is showing less in the way of snow with any minor accumulations in the NW third to 1/2 of my area (especially in Iowa). See the GFS above. Stay tuned as they say and Roll weather...TS

GET YOUR COPY OF MY BOOK DERECHO 911, IOWA'S INLAND HURRICANE, THE COSTLIEST IN U.S. HISTORY

After 10 weeks of work my new book Derecho 911 is nearing completion. The manuscript is finalized and the layout nearly finished. When that's done it's off to the publisher. I'm told from the printer to you it will be 4-6 weeks before it arrives in your mail box. In advance of its arrival I am beginning pre-sales exclusively on TSwails.com. For those who purchase early you can save $2 dollars off the regular price

As you may have heard this thunderstorm is considered to be the costliest in U.S. history, that includes all tornadoes and most hurricanes (they are not in the thunderstorm category). The last two months I have researched all the meteorological aspects of the derecho and interviewed experts from the Storm Prediction Center, NOAA, and the NWS to get the inside scoop on how and why this amazing storm came to be and how it will change the warning system going forward.

I also take a look at the history of derechos in Iowa as well as the climatology behind them. I've found what appears to be a hot spot in the state for this type of storm, especially over the past 3 decades.

I explore the reason why derechos are the most difficult type of severe weather event to predict and the challenges forecasters face to predict them and give essential warnings. I explain why this particular storm was especially difficult to foresee. I go behind the scenes of the warning process from beginning to end including the work of the NWS, emergency managers, fire fighters, law enforcement, and 911 responders.

Additionally my wife Carolyn has interviewed people all over Iowa and she brings you their harrowing stories of survival. What she finds about Iowan's spirit and determination facing such loss and adversity is truly uplifting.

We explore the impacts to agriculture, the power grid, and the states tree canopy (of which 65 percent was destroyed in Cedar Rapids...40,000 trees at last count).

Cedar Rapids (Iowa's second largest city) was severely impacted with damage to 90 percent of its homes and a complete loss of power for up to 12 days. The city was also ravaged by the 2008 flood and I compare the two events which rank #1 and #2 in terms of Iowa's all time natural disasters.

I also have a chapter on Gustavus Hinrichs who made the distinction between tornadoes and derechos while at the University of Iowa in the mid 1880s. He's credited with being the originator of the term derecho and you will find out why he's one of the most important figures in early severe weather research. Aside from his work in theory he created Iowa's first weather service and had an observatory in Iowa City.

Beyond that I also devote time to the process of determining the strength of the winds in the 2020 storm which were estimated at 140 mph. It's a complex process and I interview the warning coordinator who took on the job and made the conclusion.

There are also more than 150 storm related images along with numerous graphics and diagrams specific to the storm and derechos as a whole.

Believe it or not, there is far more to the story of this giant but you can at least see the overall "big Picture" of the book and why it will be the authoritative account of this historic storm. For me it was a labor of love and I hope you enjoy the book as much as I did putting it together. Please help me spread the word that its available.

To get your personal copy of my in depth account of this remarkable storm click on the banner at the top of the page. Roll weather....TS

WHERE THE COMPASS IS POINTING...

IT'S TIME TO TALK TURKEY PILGRIM...