After depositing scattered showers Tuesday and early Wednesday, another system has come and gone. Overall, rain totals were light around 1/10th of an inch or less. There were pockets of heavier amounts, most notably southwest of the Quad Cities in a narrow swath. Here are the Doppler estimates through Wednesday evening.

With that system out of the way, attention turns to the warm-up that brings summery conditions back to the area Thursday. Highs in the low to mid 80s are expected with dew points that reach 60 to 65 degrees. It will be a dry day under partly sunny skies.

Beyond Thursday the forecast gets complex with the addition and interaction of a front and mesoscale boundaries to the environment. Timing issues are also in play and it's all causing issues with modeling. The first challenge arrives Thursday night as the aforementioned front approaches from the northwest. Both the EURO and GFS have been bouncing around the past 24 hours trying to get a handle on the depth of instability and how far south forcing will allow convection to advance. Signs are there that an MCS develops with enough outflow to drive storms close to the Quad Cities by daybreak Friday. Sure enough the latest data has made strides in suggesting showers and storms are likely NW of the Quad Cities, especially near and NW of HWY 30. Confidence is moderate at best as to how far south storms can make it into my area but clearly the best chances exist over the NW third of my area. This is one of those cases where we'll just have to watch trends unfold Thursday afternoon, especially with regards to the amount of instability that's generated and where the forcing sets-up. I am reasonably sure not much happens across the south, especially south of I-80. Here's what the latest models are suggesting for rain totals...for what its worth.

There is also a risk of severe storms Thursday evening northwest of a line from Cedar Rapids to Dubuque. That looks reasonable to me. An enhanced risk with a tornado threat exists NW of a line from Des Moines to Waterloo and McGregor in NE Iowa.

Friday the front remains a factor as it makes slow but steady progress through the region. It's speed dictates temperatures which is another challenge. In the north readings should reach their peak in the morning near 70 before falling into the 60s in the afternoon. From about the Quad Cities southeast highs are expected to reach into the 80s before the fronts arrival in the afternoon. Readings here will also fall at that time and by Friday evening the entire area will be back in the 60s, maybe 70 in the far south.

The next issue is how far south the front gets by evening when storms are likely to again fire on the boundary. My far southern and eastern counties could get in on some storms but again a faster frontal progression would take that potential out of play. A couple hours could make a big difference so again we are looking at a low confidence forecast for storms in the SE Friday evening. For what it's worth SPC does show a slight risk in this area for severe storms but that could easily be displaced further southeast. Time will tell.

Whatever happens, the front grinds to a crawl Friday night as energy rides the boundary northeast. This allows warm moist air to override the cooler air in the cold sector where we reside. The upglide (lift) will generate clouds and showers later Friday night through Saturday (maybe even Saturday evening). Models are a little further NW with the boundary Saturday than the past couple of days and that should keep highs in the 55-60 range instead of the upper 40s and low 50s as was indicated yesterday on the GFS. Even so, Saturday looks to be a pretty poor day...gloomy, damp, and chilly. At 3:00pm Saturday the EURO indicates temperatures that look like this.

Those readings are as much as 25 degrees cooler than just 24 hours earlier.

Precipitation from this over-running event is not likely to be heavy but it will put a damper on Saturday. Here's what models are suggesting from Friday night through Saturday night.

Sunday should see improvement as the Saturday's event advances into Canada. However, unseasonably cool air aloft will be in place and that could lead to enough instability to generate some clouds in the afternoon and perhaps a brief light shower or sprinkle, mainly in the north. Highs will likely hold in the low 60s.

The active period will continue next week with rain chances Tuesday/Wednesday and again late in the week Thursday night or Friday. Readings all week long will lean towards the cool side with the 5 day temperature departures Monday through Friday showing that trend. 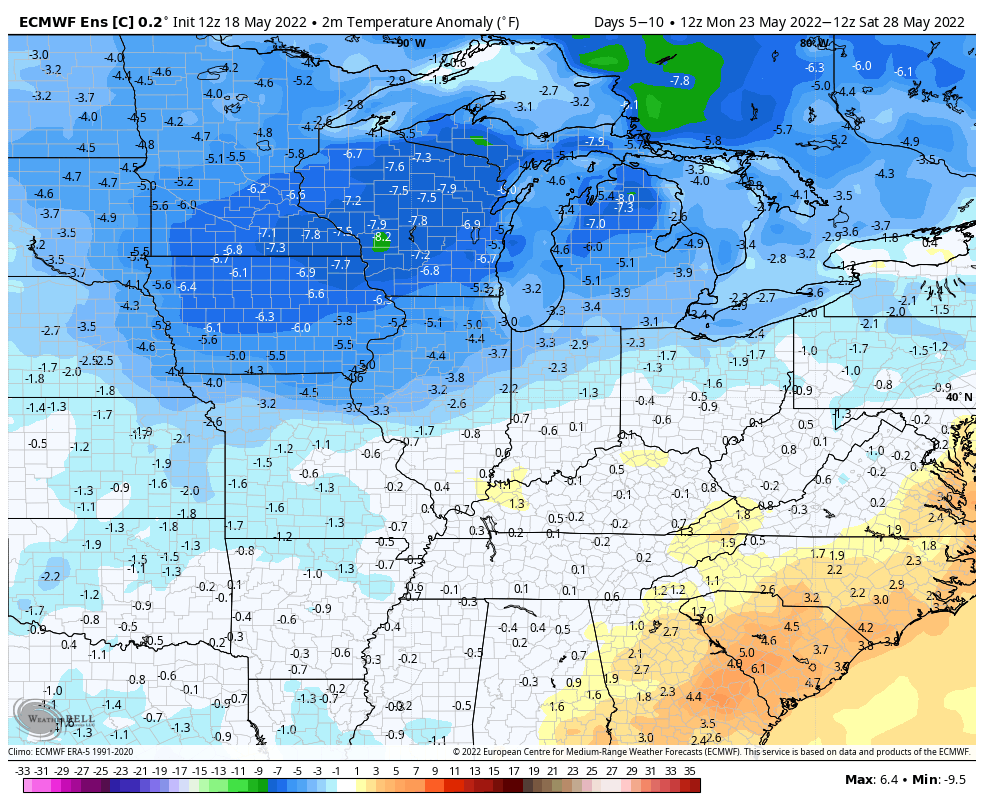 The Memorial Weekend forecast still has the potential to be warm, although models have been a bit noisy the past 24 hours. For now, I stand pat with the idea temperatures will be above normal. Additionally, the storm track is far enough north that the best rain chances remain north as well. Not to say we couldn't catch a shower or storm somewhere over the 3 day period Saturday-Monday but we're too far away out to pin point opportunities with any accuracy.

That's the nuts and bolts of it today as we are caught in the crossfire of an active pattern that still contains too much chill for my liking. At least today that won't be an issue with 80s across the board. Enjoy it and as always, roll weather...TS