WHAT A STRANGE SPRING INDEED... 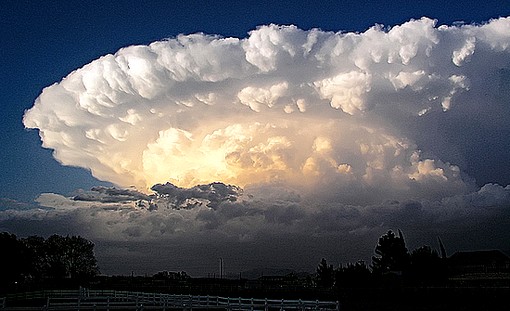 Friday was another steamy day around the Midwest with scattered "pulse" thunderstorms. What's a pulse storm? Well, it's defined as a single cell thunderstorm that forms in environments with low wind shear and moderate instability. The lack of strong shear and pronounced instability leads to a short average lifespan of less than an hour. When instability is strong, calculated by the amount of CAPE (Convective available potential energy), the storms updraft will bring a larger amount of humid air high above ground where it generates a cumulonimbus cloud with high water and ice content. When rain and sometimes hail falls from the storm, it can generate damaging winds brought about by downbursts. The pulse storms we've been experiencing all week have not been strong enough to produce severe weather but some 30-40 mph gusts have been accompanied by localized heavy rain.

One can distinguish three stages in the evolution of a pulse storm:

As I mentioned, with weak shear Friday's storms were isolated and generally short in duration. That again meant some places saw more than an inch of rain while a short distance away only sprinkles were noted. Here's the Doppler rainfall estimates as of Friday evening. Coverage in my area was on the order of 20-30 percent.

Since there were no thunderstorm warnings issued, the count this year in the Davenport NWS service area remains at two. Through June 11th that is the lowest on record since 1980 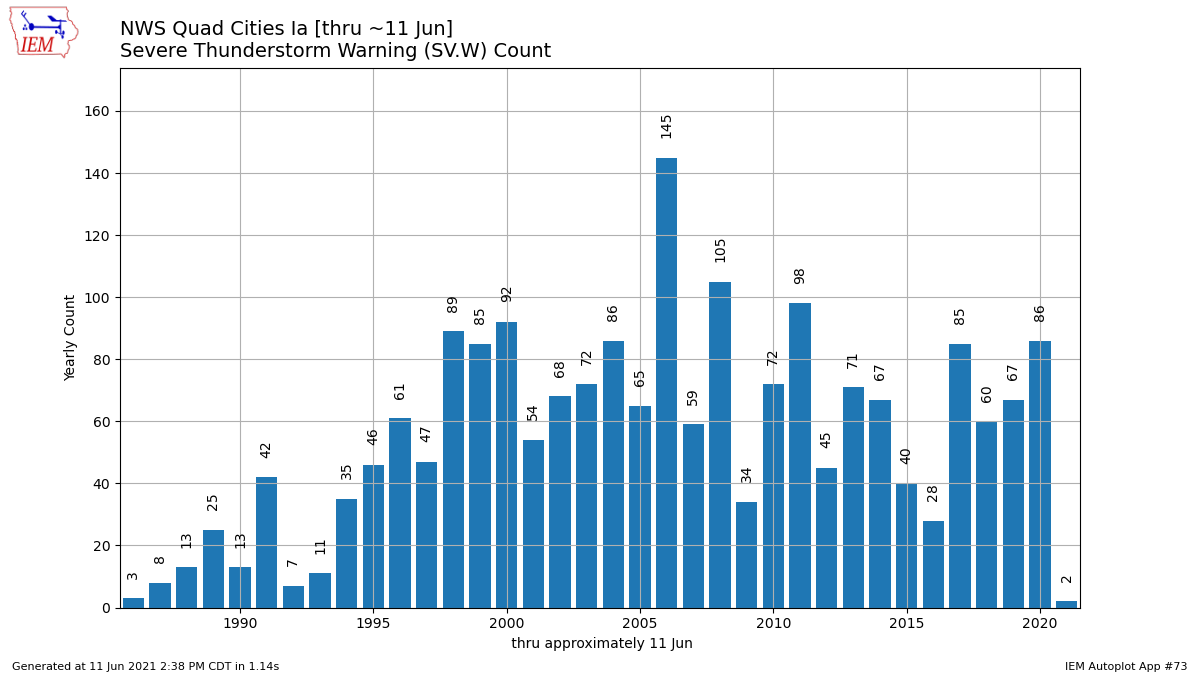 The combined number of severe thunderstorm and tornado warnings at DVN is four. Only one other year since 1986 has had less at this point. That was 1986 with three. 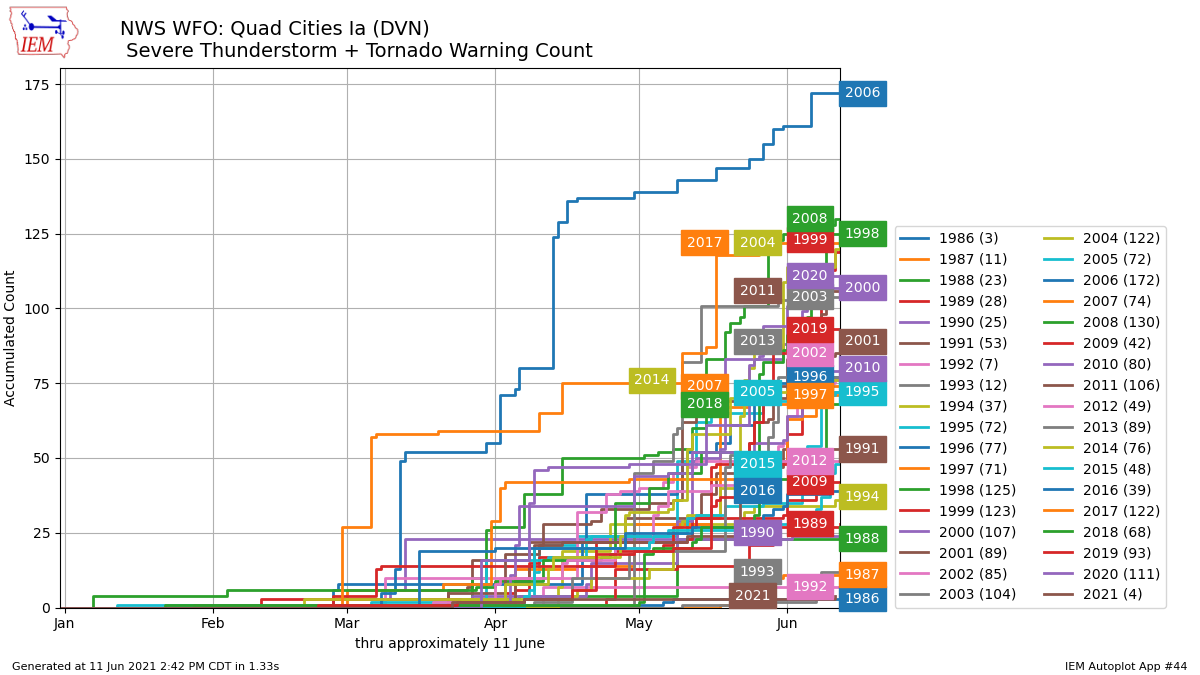 As you can see on the map below, local storm reports are at a decided low from Iowa through Illinois into southern Wisconsin since April 1st. Only nine LSR's in Des Moines and 14 in the Quad Cities (DVN). Wow! Central Mississippi has had 484 and the region round Dallas Texas 343, that's been the hot spot for storms this spring. The high totals in the south actually correlates well with what one would expect in a La Nina year.

One thing that has changed since the beginning of June are the temperatures. After a cool May readings have really soared. Iowa City has reported 5 days in the 90s and has not been below 87 for a high since June 2nd. 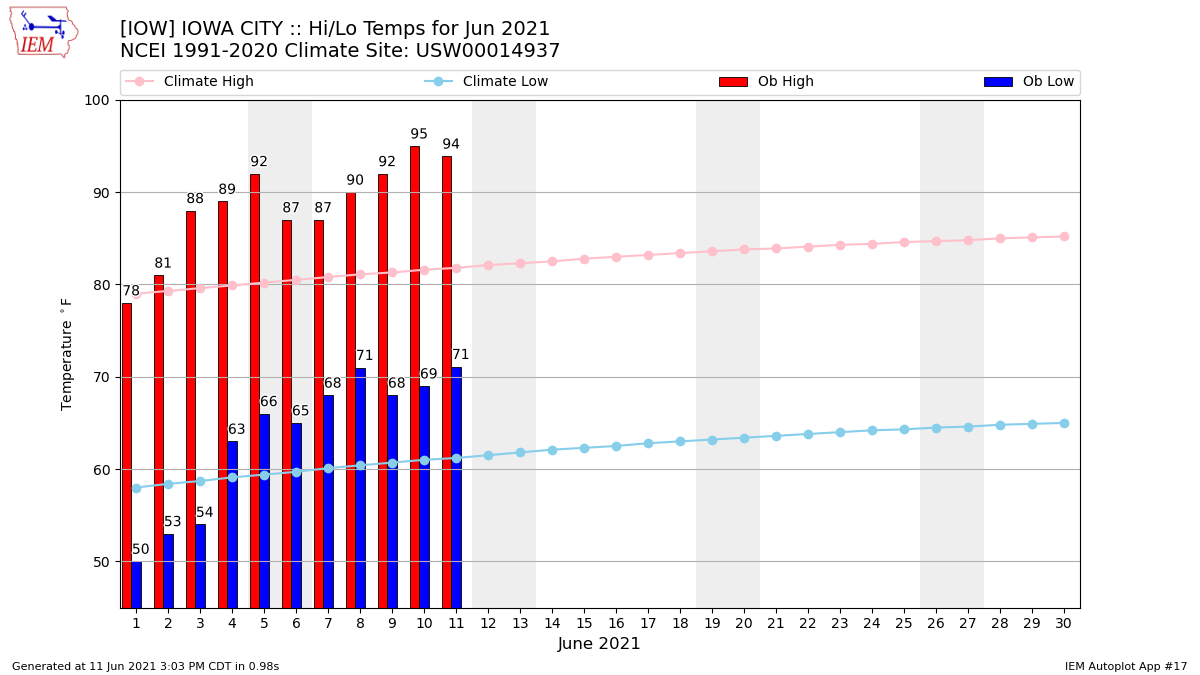 Friday in Dubuque, the high of 94 broke the previous record of 93 set originally in 1894 and tied on a couple of other occasions. So far in June the average temperature is running 8.5 degrees above normal and only a trace of rain has been recorded creating a monthly deficit that's already reached 2.00"

At the NWS office in Moline only .18" of an inch of rain has fallen in June and the average temperature is running 6.2 degrees above normal.

In essence, the warm dry weather will continue into Monday with one important exception, the arrival of much drier air. In this animation you can observe dew points crash Saturday as the low humidity air surges across the Midwest and lingers into the middle of next week.

Sunday afternoon the humidity levels are down in the range of 17-24% in my area.

After the threat of some isolated showers and storms Saturday (especially over the southeast), the dry air will effectively kill any meaningful precipitation chances until Thursday night or Friday of next week. At that time, another strong push of dry air is anticipated only this time it will have some cool air to work with. Look at the day 5-10 temperature departures the GFS has in place for Father's Day weekend. Over the 5 day period much of my area is shown a good 10 degrees below normal.

This is the GFS meteogram. Note the extended stretch of days in the 70s. (8 all told)

But, the EURO meteogram is far different leaning towards the warm side of the ledger. I suspect by the middle of next week the EURO is too toasty but on the other hand the GFS is likely too cool. I think a compromise solution is in order. Either way, slowly but surely temperatures will be cooling later next week and with humidity levels drastically lower, it will be more comfortable. The big concern is rain and prospects for much of that look pretty meager over the next 7 days. Enjoy your weekend and roll weather...TS