MUCH BETTER TODAY, BUT ISSUES REMAIN...

To no ones surprise the period April 2018 to May 2019 is the wettest on record across the contiguous United States going back to 1896. The mean of 36.08" across the nation is about 6.00" above the long term average.

Here are the associated departures...almost 40" above near Clarion.

It's no wonder soil moisture levels are at all time records with many spots at 99 percent saturation. I know of one farmer in central Illinois who has planted only 60 of his 5,000 acres. Combine that with the cool temperatures and it's getting serious for many agricultural producers.

Our most recent storm is on its way out after causing all kinds of problems over the central United States the past couple of days. Tuesday there were 37 reports of tornadoes. 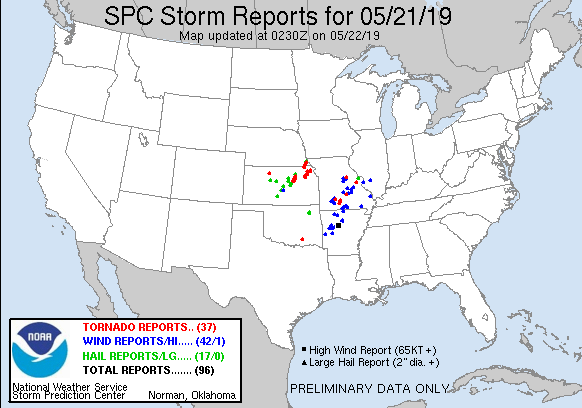 Monday (which was expected to be the biggest day) had 26 reports. Once again my area was fortunate enough to miss out on the action and as of today not a single tornado watch has been issued and none have touched down in the state of Iowa. 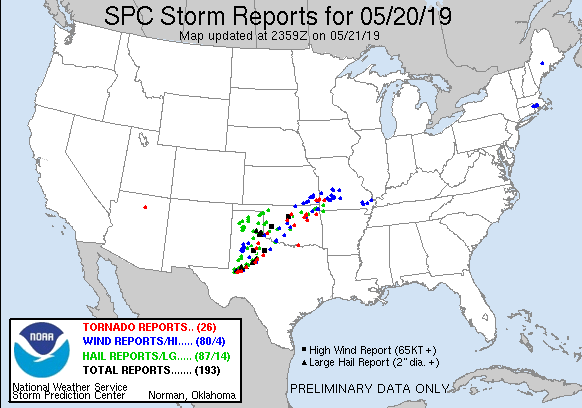 The beast responsible for the mean weather on the satellite below is rapidly moving north. That takes the threat of precipitation out of the area during the day Wednesday.

Winds will switch from the east to the south and that will make a huge impact on temperatures which are expected to surge more than 20 degrees from Tuesday's readings.Aside from the winds which stay blustery, sunshine and temperatures in the 70s will make for a much better brand of weather.

The next system to impact my area arrives Wednesday evening. A cold front will trigger another round of storms at that time but it's only far SE Iowa and Illinois that are impacted. You can see the line of storms on the simulated radar of the 3k NAM.

Heavy rain and some severe storms are possible as the line moves southeast. As of Tuesday night SPC has this for a severe weather risk.

The 3k NAM has this for total rainfall Wednesday night. Nobody needs a drop of it.

The front responsible for the this batch of rain turns stationary and wavers around into Sunday. As long as it's in the area there will be chances for showers and storms. However, there will be plenty of dry hours and opportunity for outdoor activities. Thursday night is the next window that looks promising for more storms and heavy rain. After that timing and location of mesoscale boundaries are too uncertain to get fancy. More on that in later posts. Until then, happy hump day and roll weather...TS