ONE DOWN, ANOTHER SNOW TO GO...

Slowly but surely the first part of our double barreled storm system made its way across the region Wednesday. Snow fell over a large part of Iowa but as it moved east it fizzled a bit east of the Mississippi as it encountered resistance from dry air and out ran its upper air support. In general accumulations were in the 1-3" range.

The totals you see below are from the Iowa Mesonet through 2:25 am. Some places had more but the reports have not come in that would fill in the gaps over eastern Iowa.

Of course we are in the heart of winter so there's nothing shocking about snow. In fact, the period we are in now lasting through mid February on average sees at least some light snow once every 3 days. With Wednesday's snow and 2 more days of it to come, January 2020 will have at least 13 light snow days which is above average. I'm not complaining about that.

With the first system behind us the next round of snow is dependent on the track and intensity of a secondary disturbance which is stronger and more organized. Thursday the energy will be over the plains in the form of a closed 500mb low. It digs into SE Kansas and then makes a turn across Missouri before chugging into Illinois Friday. The center is SW of St Louis in the image below. 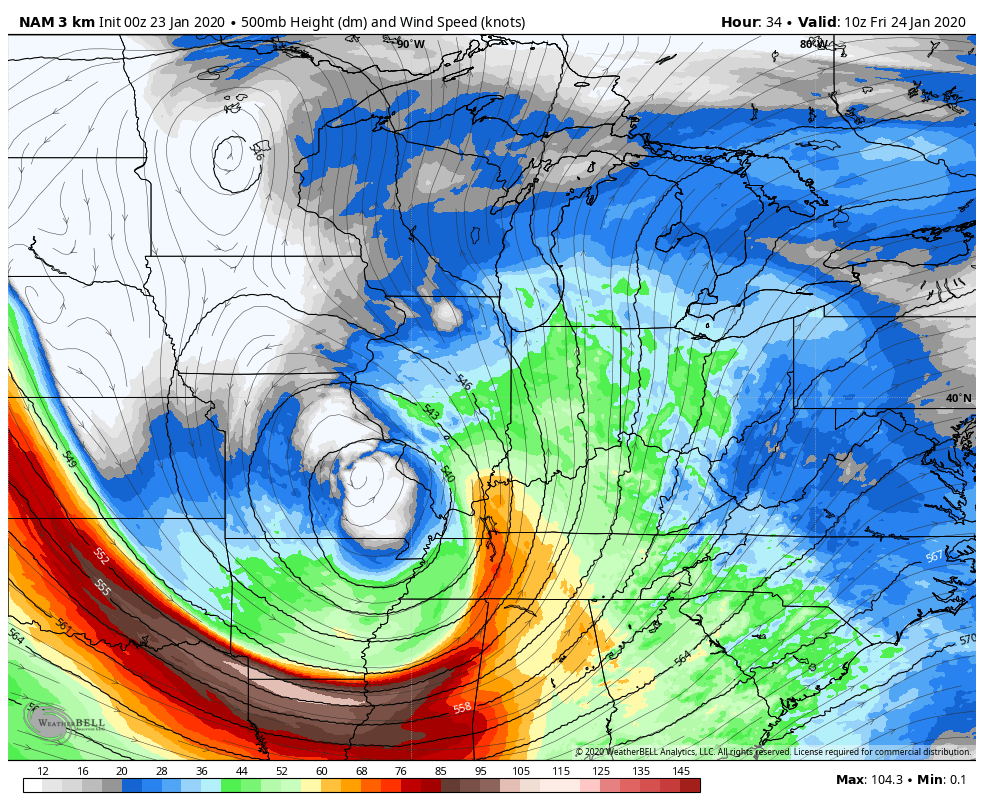 In advance of the primary storm, much of Thursday and parts of Thursday night precipitation will be light and scattered. For the most part it will be light snow, flurries, or even freezing drizzle at times. Little if any accumulation is expected, especially with temperatures hovering around freezing.

Late Thursday night and especially Friday, vorticity (energy) will rotate around the upper low. These spokes of forcing will spin up bands of snow that wrap northwest around the center and back into my area. There's a bit of doubt how far northwest the bands get but it does appear the southern and eastern parts of my area have the best chances of seeing another burst of snow. Most models show another 1-4" from Thursday night through Friday night. The 3K NAM shows the best chances over the SE third of Iowa and northern 2/3rds of Illinois.

You can also see some of the amounts on the 3k NAM exceed 6", especially near and east of the Mississippi.That is on the table NW of the circulation but there's not much agreement on that potential yet. I'm hoping Thursday will shed more light on that particular issue. A shift south or north would impact totals

Meanwhile. here are some of the raw snowfall forecasts. These amounts would be the totals from Thursday morning through Saturday morning. Overall, there is pretty good consistency.

After the snow departs Friday night the rest of the weekend looks dry and seasonal with highs upper 20s to low 30s. Roll weather...TS