SOME OUTSTANDING DAYS AHEAD...

WE STILL HAVE OPEN SPOTS FOR WEATHER SCHOOL...SEVERE WEATHER 101. THIS WILL BE A FANTASTIC CHANCE TO SEE AND LEARN ABOUT THE THE STRONGEST STORMS ON EARTH. IT'S A ROBUST SESSION FEATURING INTERACTIVE SIMULATIONS AND HEART THUMPING VIDEOS! The 50 PEOPLE THAT ATTENDED OUR CLASS BACK IN JANUARY RATED THE SESSION 9.8 OUT OF A POSSIBLE 10. WE BRINK IT HARD CORE! LET'S GO GUYS, GET IN THE GAME! KEEP READING BELOW.

We are pleased to announce that we are offering a new edition of Weather School called Severe Weather 101 for Saturday April 4th. We have devoted the entire afternoon to the formation of severe storms with a strong emphasis on tornadoes. We'll do some simulations and take you inside several classic historic tornado outbreaks that have impacted Iowa and Illinois. I think you'll be really pleased with the sessions. We hope you can join us for all things severe weather! For all the details click on the banner below or contact Carolynswettston@yahoo.com

In this post I want to start you off with a look at temperatures departures in the stratosphere. We're talking way up high near the 50mb level. That mass of purple color is bitterly cold air that has been massed over the western Arctic since mid December. That type of set up favors a powerful west to east storm track at the base of the frigid air north of the Canadian border. 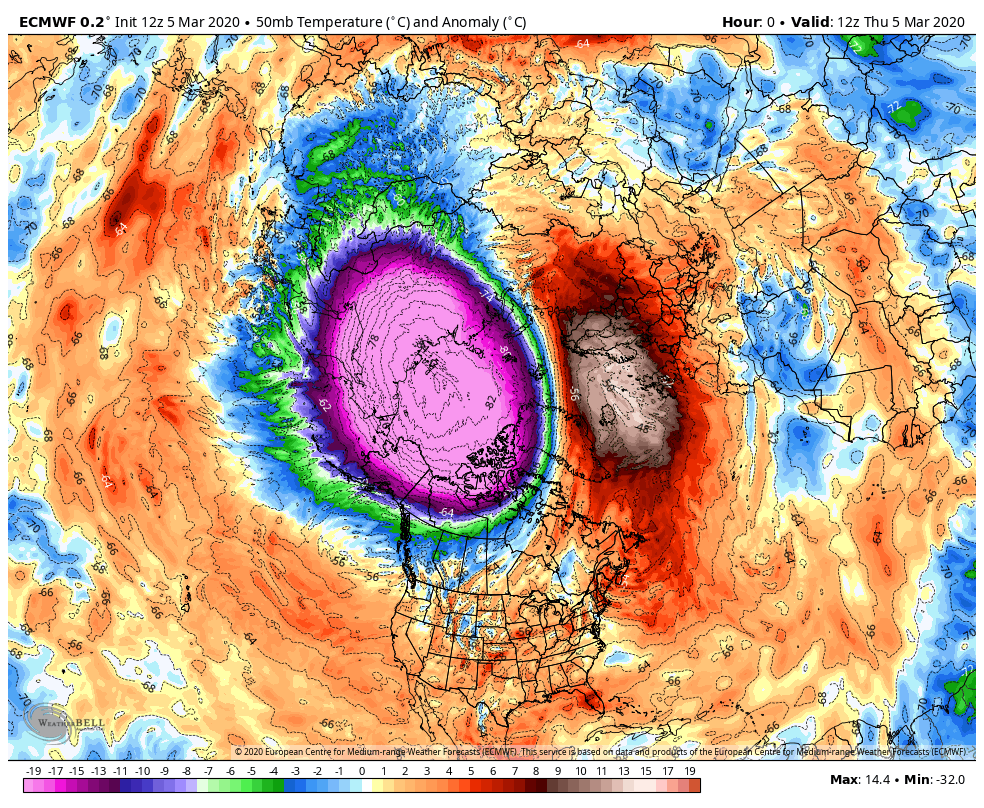 That zonal flow that roared across Canada has kept the AO (Arctic Oscillation) predominately positive for more than 2 months. See below.

In the graphic below you can see the jet stream pattern associated with the positive and negative phases of the AO during winter. Note how the air in the positive phase (where we are now) originates in the Pacific and streaks across the nation. That is far warmer than the Arctic regions the negative AO taps.

I'm quite certain that the cold pocket of air in the stratosphere at 50mb has not allowed for deep or prolonged surges of polar air. It's been the dominate driver in our winter keeping the EPO positive along with the MJO's persistence to remain in mild stages. So, until I see changes or a break down of that cold vortex in the stratosphere at 50mb, it's more of the same.

10 days from now, here's the 50mb stratospheric temperature departures. Not much difference and still a positive AO in place

That means on average we are going to remain above, to well above normal on temperatures. The EURO ensemble control shows this for departures the next 10 days

The good people at the Climate Prediction Center agree showing this for the 6-10 and 8-14 day temperature outlooks.

The 3-4 week period shows is even warmer! Spring looks to get off to a mild start this year.

After a blustery cold night Thursday, the next batch of warmth comes rolling in just in time for the weekend. Highs Saturday should reach 55-60 and Sunday we go over 60. A fine weekend indeed. Roll Weather...TS