Most of my local area had a pretty benign weather day. Temperatures in the 50s, 60s, 70s... showers, maybe some thunder. Just to our northwest was a nasty winter storm and the south was dealing with large hail and tornadoes. Let's start in the south first where severe weather was ongoing from Saturday night into Sunday. 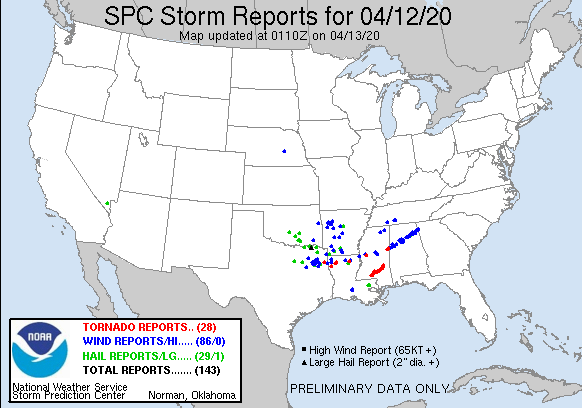 The storm reports as of Sunday evening show wind reports and hail as well as nearly three dozen tornado reports. There were several strong tornadoes reported that did damage in Louisiana and Mississippi in particular. Something incredibly rare happened from the Storm Prediction Center, too. They issue "Mesoscale Discussions" which outline areas where severe weather is likely and where a Tornado or Severe Thunderstorm Watch may be needed. Now the SPC usually outlines big areas but on Sunday they highlighted an area where supercells were producing strong violent tornadoes and predicting wind speeds (something we don't typically do ahead of tornadoes)

That would be EF-4 or EF-5 damage, but of course the tornadoes cannot be officially rated until the National Weather Service goes out to survey the damage.

Two tornadoes did produce damage in the southeastern Mississippi area. Here's a look at a car flipped over by one of those tornadoes via Jeff Piotrowski -

Further to the north there was heavy snow and strong winds on the northwest side of the system.

Here's a zoomed in look at the Iowa snowfall totals:

You were in or you were out -- a very tight gradient for snow in the Upper Midwest. Strong winds also lowered visibility and drove temperatures down even more. Cold air will now spread across the region as we start the new week. Check out the temperature change from Sunday to Monday:

That translates to high temperatures running 10 to 20 degrees below normal:

Most of the week is going to be quiet but it will be chilly. Temperatures will be running below normal for the entire week.