A SHORT BUT WELCOME REPRIEVE...

As expected Thursday was a wet and wild day in my southern counties with heavy rain and numerous warnings for wind and excessive rains. For the most part the biggest issue was heavy rains and that was anticipated with some 24 hour totals around the 4 inch mark. These are the Doppler estimates ending at midnight Thursday. Much of my area had widespread amounts of 1-2" with pockets of 3-4" where training was a factor..

There were at least 79 reports of severe weather in the central U.S. Thursday with about a third of those found in my area 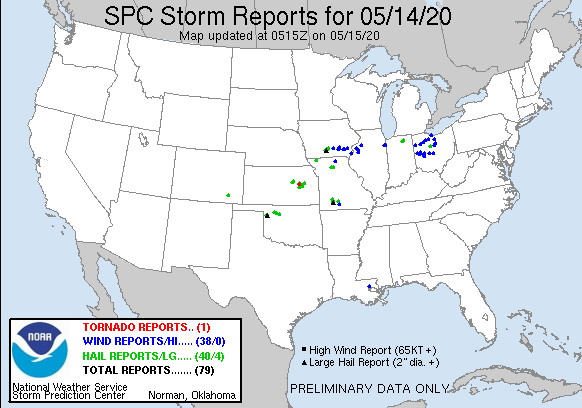 With the storm departing Friday skies will clear from west to east during the day. Highs in most areas should bounce back into the low 70s which typical for mid-May. Overall, not a bad day to start the weekend. A short but welcome reprieve.

The next system is due to arrive Saturday but according to the latest trends the showers and storms should hold off in most areas until late in the day, maybe even evening near and east of the Mississippi. That should allow highs Saturday to reach the range of 65-70.

Overall, this wave has good surface and upper air support indicating the potential for more significant rain. Where that occurs is still open for debate but the most recent guidance shows the greatest totals just a bit further north than what has occurred over the past 24 hours. That is a positive since rivers and streams south of I-80 have experienced some sharp rises since Thursday. Here's what the EURO and 3k NAM show for rain from Saturday's system.

The rain from this disturbance works its way out early Sunday but overall the day should feature plenty of clouds, brisk north winds, and cool temperatures. These are the highs the EURO sees Sunday.

By the way I'm still looking for a summery warm-up the middle of next week but the latest indications point to a slower evolution. That means the long advertised 80s might wait until Thursday or Friday before making an appearance. Either way next week looks pleasant with highs starting near 70 Monday and warming to near 80 late in the week. Little if any rain is anticipated which is good news for many of my farmer friends.

On that positive note I will wrap this post up. Have a fabulous Friday and roll weather...TS