Multiple tornadoes touched down in Iowa, Illinois and Wisconsin on Saturday, 12 reports so far. Here's a view of the tornado warned storm with the tornado visible from the Iowa City area from Ron Allen:

The cell went on to produce into Cedar and Jones counties. One home was damaged in rural Johnson county, and some trees and outbuildings were damaged in Cedar/Jones counties. Into Illinois in Whiteside county there was damage to a home and wires down. Here's the other storm reports from Saturday across the country: 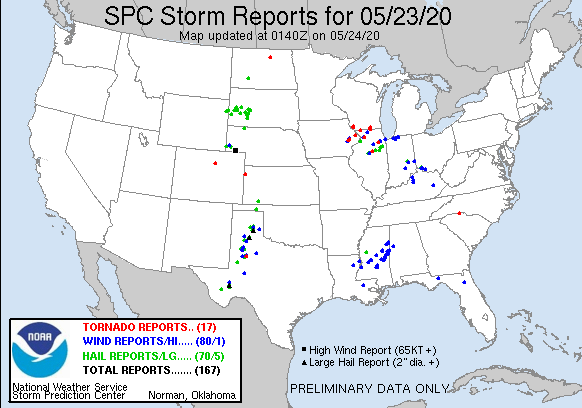 A low pressure system moved across the Midwest and with just enough instability showers got going (some thunderstorms). There was a lot of spin from that low pressure system which made the showers and storms spin, which lead to these funnel clouds and tornadoes. Now the summery pattern continues with more warmth and storms as we head through the rest of the holiday weekend. Here's the outlook for Sunday from the Storm Prediction Center:

There will be a complex of storms coming in from the west early Sunday morning with mainly a wind threat. Then additional thunderstorms late Sunday afternoon through the night into Monday. There's a marginal risk for severe weather then on Monday:

Here's a look at the HRRR model for Sunday through Monday morning:

The threat for tornadoes will be low Sunday with strong winds and hail remaining the biggest threats. In between the two rounds of storms temperatures will take off in the afternoon.

This will likely be the warmest day of the year for many of us and for Cedar Rapids it will be the first 80 degree of the year. It will be the latest first 80 since 1973 (the first 80 that year didn't come until June!). So it's definitely time. The warmth and the active weather will continue as we head into next week.