What to you do when something is remarkable? You remark about it. There's some very intense heat getting set to roast the Plains over the next two weeks. Here's why it's worth noting and what it could mean for us here in the Midwest.

The core of the heat initially will be over the southern Plains the next 2 days. With time it spreads into the central Plains next week and is eventually shown poking all the way into the Dakota's by next weekend. The GFS is probably having some feedback issues so it is likely to be several degrees too warm. That said, even the EURO has a few days where highs in parts of Texas, Oklahoma, and Kansas soar into the range of 110-115. The GFS shows an actual high of 118 near Woodward, Oklahoma July 15th.

Here's the next 16 days in Hobart, Oklahoma capped by a 116 degree high.

When temperatures exceed 110 during the day you can imagine they don't cool off much at night, especially now when the days are long. The GFS shows lows remaining in the low 90s in NW Oklahoma the morning of the 15th.

The primary reason it will get so hot is that dew points are down in the 40s to near 50 degrees. The drier the air the greater its ability to warm That will actually keep the heat index values near to perhaps a few degrees cooler than the actual temperature. You know the saying, it's not the heat but the humidity. In this case, not so much, 110-115 is hot any way you slice it.

DOES THE HEAT RAVAGE THE MIDWEST TOO?

The obvious question for us in the central Midwest is, does the heat ever reach us? Based on the latest guidance we never get into the core of it, nor do we see any 100 degree highs. However, with corn and beans maturing, evapotranspiration will be maximized. Additionally, moisture is pooled along the rim of the heat to our southwest and dew points by the middle of next week and into the following weekend are forced into the mid 70s to near 80. The GFS has these dew points in place the 20th.

At the same time, highs are expected to eventually go over 90. That's only a few degrees above normal but in this case those high dew points will make a huge difference with the potential to make it feel like 105-100 degrees. Here's what the GFS depicts for heat index values the 20th. That would get us into an excessive heat warning if it verifies. 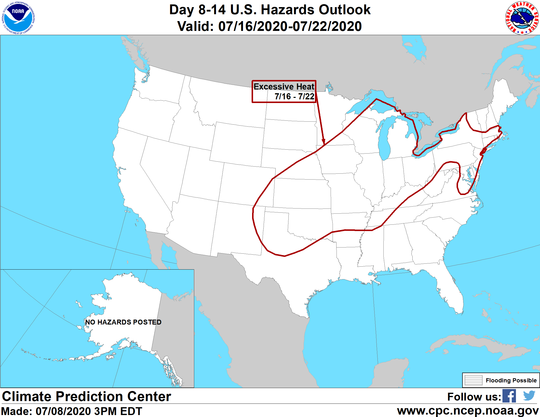 POTENTIAL FOR THE RING OF FIRE THE NEXT WEEK OR SO

For the next 6-8 days the core of the heat remains focused on the Plains and lower Midwest. That is going to place some part of the Midwest on the northern periphery of the heat dome. That is where the storm track will set up allowing the strong CAP (thunderstorm prohibiting warm air aloft) to occasionally break. That is most likely at night when slight cooling aloft and the low level jet can break the barrier. That can lead to thunderstorm clusters which can produce significant rains. Where that boundary sets up the next week is still to be determined but it's quite possible that some part of the central or northern Midwest gets some downpours and beneficial rains.

At this point, both the GFS and EURO favor my northern counties and the upper Midwest to be in closest proximity to the ring of fire. Here's what both show for rainfall totals the next 6 days. Keep in mind that outflow boundaries (miniature cold fronts from storm clusters) can end up causing the ring to reposition itself. I think my area is definitely in a position where the ring of fire could impact both temperatures and precipitation amounts.

The GFS for the same period.

The slow passage of a cold front Thursday and Thursday night will bring the next chance for showers and thunderstorms. While they look broken and a bit clustered most areas see a good chance of getting some rain. In the stronger updrafts a few pockets of 1 to 1.5" rains are possible. The majority of the region should see substantially less.

A BIT COOLER AND LESS HUMID FOR THE WEEKEND

The front will bring down temperatures and humidity for the weekend to typical July levels. Most of the showers and storms should hold to the west and south as high pressure and ridging holds until the start of the new week. That said, a few isolated storms are a possibility with a minor disturbance Saturday night.

That's it for the here and now. Looks like we are in the throes of summer. At least you don't have to shovel it! Roll weather...TS