THAT'S HOW I SPELL RELIEF...

In the world of weather, nothing brings relief from a hot steamy air mass better than a "cold front". One of those crossed the central Midwest Sunday night and boy did it do a number on the heat in more ways than one.

First, look at the 24 hour temperature change from Sunday afternoon to Monday afternoon. Much of my area 9-13 degrees cooler.

Then you get into the dew points and the reduced moisture in the atmosphere was even more dramatic. Many area dew points were down 11-16 degrees over that same 24 hour period.

Where it becomes really apparent is in the heat index values. Sunday afternoon some were as high as 110. This sampling around 2:00 pm shows several heat indices hovering near 107 degrees.

Now look at what we experienced Monday afternoon. Most of my area was posting heat index numbers in the low 80s. In other words, it felt 25 to 30 degrees cooler around my area than it did just 24 hours earlier. I like that party!

On the 500mb jet stream chart you can see the upper air disturbance that's bringing the change digging into the upper Midwest. 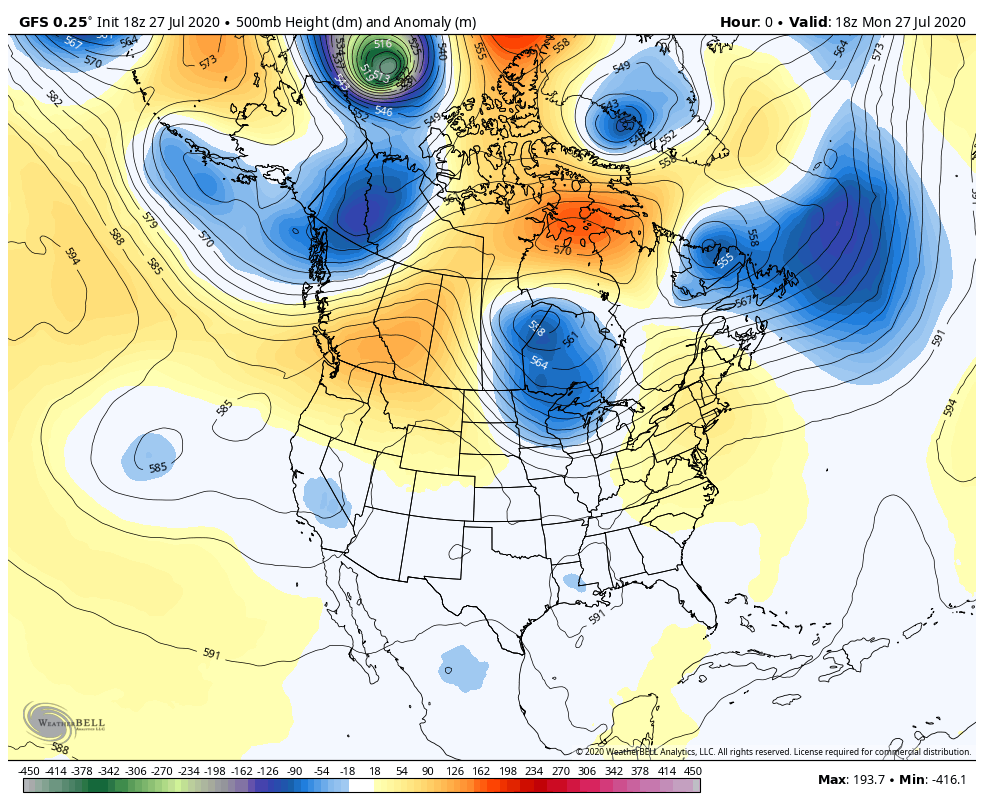 We are now entering into a period of NW flow that is likely to last well into the first half of August. I mentioned this last week and the impact it would have on a cooler temperatures going forward. This is the jet this coming Sunday. Cool and relatively dry air for early August is in firm control.

By August 12th another strong surge of cooler air is poised to dive into the mean trough reinforcing the NW flow.

I'm not convinced the push will be as dramatic as the GFS shows but the forecast dew points to our northwest August 12th are a sign that fall is waking up.

As proof, get a load of these lows in Minnesota down around 40-45 degrees August 12th!

These are the temperature departures in 5 day increments over the next 16 days on the GFS. They certainly reflect the trend towards cooler conditions.

It also appears that the overall pattern should support mainly dry conditions from Tuesday through the weekend.The EURO shows this for total precipitation during that period.

All things considered, the weather is looking fine for some time to come. Those dog days of summer look short on bark and bite the next couple of weeks. Fingers crossed. Enjoy and as always, roll weather...TS