THE DAY OF THE DERECHO...

What a day of weather Monday was for many of you back in the great Midwest. A vicious Derecho raked a large portion of the central Midwest (including much of my area) producing extensive damage with many reports of wind gusts 70 to 112 mph! Power in some areas will be out for 3-4 days and damage will be in the millions, if not more!

SO WHAT IS A DERECHO?

A derecho (pronounced similar to "deh-REY-cho" in English, is a widespread, long-lived wind storm. Derechos are associated with bands of rapidly moving showers or thunderstorms variously known as bow echoes, squall lines, or quasi-linear convective systems. Although a derecho can produce destruction similar to that of a tornado, the damage typically occurs in one direction along a relatively straight path. As a result, the term "straight-line wind damage" sometimes is used to describe derecho damage. By definition, if the swath of wind damage extends for more than 250 miles, includes wind gusts of at least 58 mph along most of its length, and also includes several, well-separated 75 mph or greater gusts, then the event may be classified as a derecho. Recently, an updated definition of "derecho" was proposed. The primary aim of this work is to make the definition more physically-based, i.e. focused on the meteorological processes believed responsible for the production of organized, damaging surface winds. The proposal requires the presence of certain radar-observed storm structural features such as bow echoes and rear-inflow jets.

It was apparent early Monday trouble was brewing as a line of storms entered NW Iowa. As they progressed east, They entered a very unstable atmosphere in central and eastern Iowa that included high CAPE and vertical shear known as BULK SHEAR.

These are the CAPE values which were up near 5000 j/kg prior to the storms. Big time instability.

The available water vapor (moisture) as shown in PWAT form.

The microburst composite showing the high likelihood of damaging winds a couple hours before their arrival.

WRITING ON THE WALL

For those in the know, the writing was on the wall for destructive winds based on the above ingredients and developments on radar by early to mid-morning.

The Storm Prediction Center upgraded its outlook to moderate for severe thunderstorms through the heart of my area. A very good call.

In a final move of confidence, SPC issued a PDS thunderstorm watch. They are rare and it highlighted a (particularly dangerous situation) for severe wind damage with gusts to 100 mph) and possible QLCS tornado spin-ups.

A PLETHORA OF DAMAGING WINDS

As it stands now late Tuesday night, there are at least 772 reports of damaging winds from the Derecho which is still in progress across Ohio and Indiana.

Here's where some of the strongest gusts occurred around my area.

At the height of the derecho between 11:30 am and 2:30 pm in my area, the Doppler looked like this. The bow in the complex a tell-tale sign of powerful winds. You can also see storms aligned west to east along a well defined warm front south of HWY 20 helping to enhance the vertical bulk shear.

The velocity mode shows at the apex of the bow a pocket of very intense winds producing gusts of 95-105 mph on the NW side of Cedar Rapids where extensive damage was reported.

WINDS EQUAL TO AN EF 2 TORNADO OR CATEGORY 2 HURRICANE

These are some of the strongest straight line wind gusts which would be found in an EF 2 tornado or category 2 hurricane.

Numerous gusts south of HWY 20 were in the 65-75 mph range. Winds that strong will do some ugly things and here's proof in pictures.

Some damage from an NWS tweet about 2 blocks from my old neighborhood in Marion near Alburnett and Boyson roads.

The KGAN road warrior below. One of my former meteorologists at the station, Nick Stewart was in the vehicle when it was overtaken by the fast moving storm which then proceeded to blow out the vehicles windows. He was unhurt.

A very expensive KGAN satellite dish destroyed by the winds.

Numerous corn and bean fields were flattened by the big blow. Miles and miles of crops destroyed.

An amazing sight. A stop sign bent and flattened by a powerful gust.

Some areas, especially near the warm front got some training of storms and very beneficial rains of 1-3 inches. Further south amounts were much less as the 70 mph movement of the bow kept amounts down. Here's the Doppler estimate of rainfall out of the Quad Cities. The heaviest rains were clearly near and north of HWY 30.

On a positive note, clean-up Tuesday will occur with sunny skies and low humidity. Dew points will plummet to very comfortable levels in the mid to upper 50s with highs in the 80-85 degree range. Monday will be nothing more than a bad memory with plenty of reminders that it was far from an ordinary day. Roll weather...TS

THE WEATHER OUTSIDE IS...WELL, SLOPPY 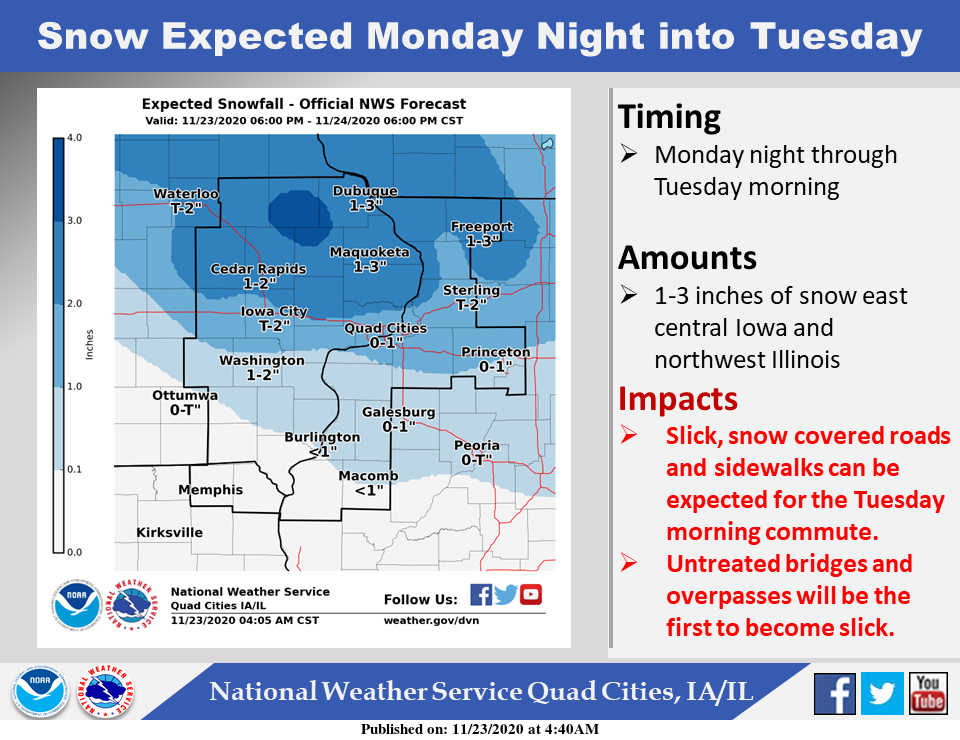