I'M VOTING FOR THIS PARTY...

Monday got off to a frisky start with some of the coldest readings of the fall season. Much of my area dipped into the teens for lows with 17 reported in Cedar Rapids and Galesburg 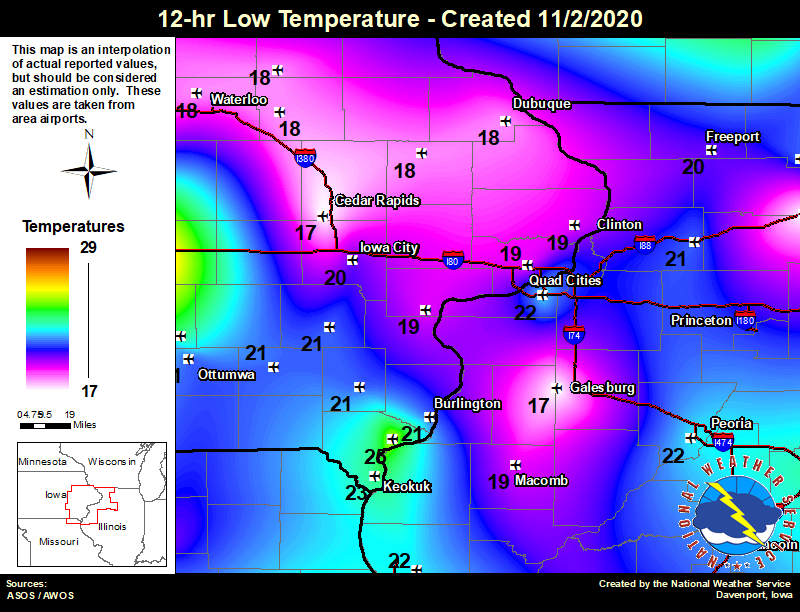 Cold and dry has been the general rule the past week. Here's what the 7 day temperature departures looked like.

Precipitation was also very limited in the dry air mass north of St. Louis with most of my area seeing little to no rain or snow.

Things are really looking good for election day and beyond as a massive ridge builds over the eastern United States. This has the characteristics of a classic fall warm-up. Ridge east, trough west, Indian Summer in the middle.

Over the coming 7 days (through next Tuesday) the departures on the GFS are a sight for sore eyes averaging 10-15 degrees above normal. With typical highs now in the mid 50s that's going to mean readings of 65 to 70 much of this week and into the weekend.

The GEFS ensembles look like this showing 6 consecutive days of highs in the 60s with a range of 65-68.

Another plus will be the fact that rain chances look low until late Sunday or Sunday night. Here's the rain totals forecast by the GFS through noon Sunday. Forget the umbrella.

Eventually that big western trough gets close enough to deliver energy and moisture and the general consensus is that a potent storm will form Monday that comes up the chute into Iowa Tuesday. Below is the surface depiction of the GFS at noon next Tuesday.

As strong as the SW flow is projected to be, there should be very high levels of moisture in place by November standards. The GFS has dew points poking into the low 60s ahead of the surface low.

That creates water vapor levels that are more than 3 times the norm.

With strong dynamics, deep moisture, and a slow moving system rain totals could be significant. While it's too early to get cute with numbers the GFS shows the potential with totals of 3-5 inches in the heaviest axis from SC Iowa into Wisconsin. That's going to fluctuate and move around the next few days so the only purpose in showing this is to get out the idea this appears to be a wet storm for a broad area. By this time we could use a good rain as many areas will have gone nearly 2 weeks with nothing in the bucket.

There is likely to be a snowy side to the system but we won't need to worry about that in my area.

Once the storm goes by windy and much cold weather will follow. Temperatures will go from the 60s Tuesday to this by Wednesday evening. That's the end of that toasty party! So you know I voted for it....just saying.

There you have it on this monumental election day in 2020. Exercise your right to vote, many have suffered or died to allow us this great privilege. Roll weather...TS

P.S. I have a special going on during pre-sales of my new book Derecho 911, Iowa's Inland Hurricane. Click on the add below to order your copy now during this limited time offer. Thanks!