Now that we're stuck in this cool spring pattern there's not much to do but bide time and wait for it to break. Even from outer space, Wednesday didn't look good.

Under the clouds, temperatures were only in the 40s in many areas. These are the 4:00 PM observations. The high in Dubuque reached just 43. A typical day should be up there around 60.

With the wind it felt even worse with wind chills barely above freezing.

Low temperatures Wednesday were especially chippy with readings in the upper 20s all the way to Galesburg, home of the renowned Kholby Martin. The cold spots were Dubuque and Cedar Rapids at 27 degrees. Come on man!

Thursday morning won't be quite as cold, especially north of I-80 where clouds will be a moderating factor. Further south, the clouds are expected to break allowing lows to head towards 32 again. A frost advisory was in effect for the second night in a row for the area near and south of HWY 34.

Under mixed sun and clouds, the remainder of Thursday will remain crisp with highs generally in the upper 40s to low 50s.

That brings us to the weekend, which as a whole will be dominated by high pressure and a dry flow from the northeast. There may be a few stray showers or sprinkles Friday night or Saturday but little if any rain is expected as the best moisture and forcing holds to the south.

The next shot at precipitation comes Monday night along with another late season surge of cold air. Some rain (or snow) showers are a possibility but again, amounts should be on the light side. Having said that, I'm leery of a wave forming along the edge of the cold air that could not only produce heavier precipitation, but a more substantial snow band somewhere in my area. I'll be watching the trends on this in coming days. Meanwhile the EURO suggests this for total precipitation through Tuesday of next week.

The GFS is more substantial with precipitation from the Monday night disturbance and shows this.

With that reinforcing blast of Polar air Monday night, the table is set for us to eat more cold turkey. Look at the chill that's centered on my area in the 6-10 day period. Dang, that's an ugly map.

If you are looking for an end to this fresh little pattern, think May. This is the EURO meteogram for the next 15 days, going out to April 29th. Not a single day shows a high above normal. 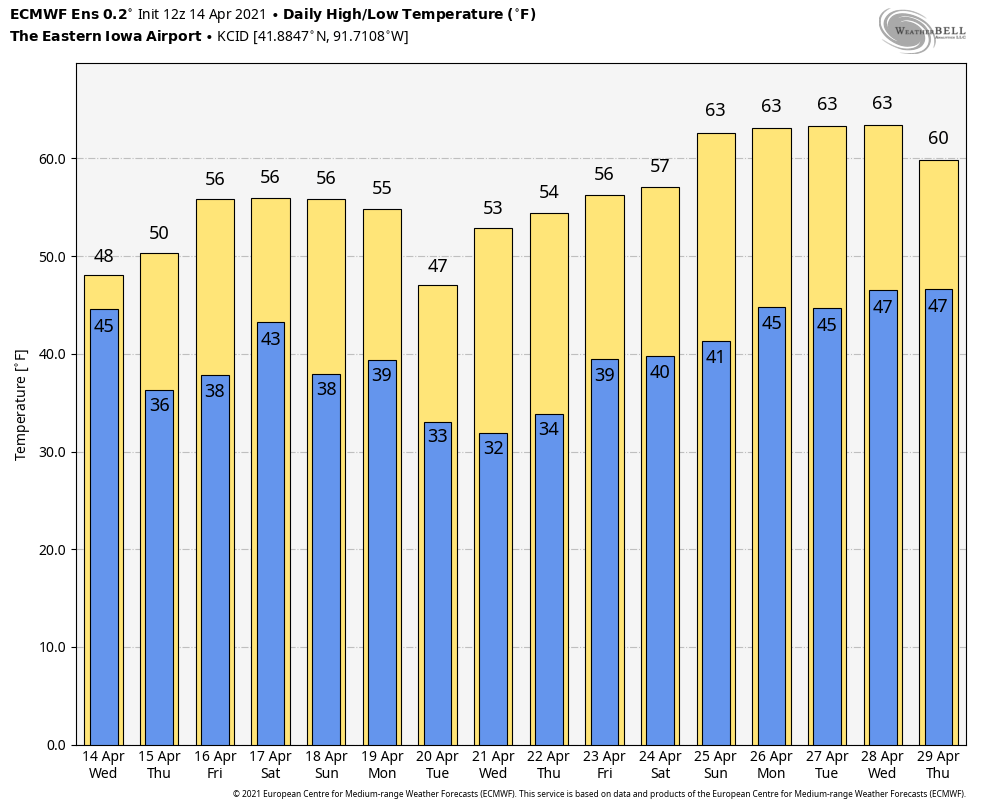 In case you're wondering what normal is, by the end of the April that yields highs that range from 64 north to 69 south. Looks like we'll be biding time (for some time) waiting for the return of spring! Roll weather...TS