PHIL SAYS SIX MORE WEEKS, I'M IN HIS CAMP WITH MORE SNOW AND A FRIGID BLOW...

PHIL AND HIS SHADOW...

In a snowstorm yesterday the fabled oracle of winter, Punxsutawney Phil saw his shadow and the legend immediately declared...6 MORE WEEKS OF WINTER! My personal groundhog, Nimbus Robert Swails who looks like a dog (Okay he is one), also concurred. By the way, we had 7.5" of snow here which he loved as much as I did. He even slept in it for two hours. I personally draw the line there.

LOT'S OF WEATHER ON THE TABLE...

There is so much going on in the weather pattern right now that it's impossible to keep up. Overall, Wednesday should be a decent day on paper but there is a concern that areas of dense fog could reduce visibilities in parts of the area the first part of the day. It's hard to say how widespread this will be locally but warm air advection out west has already caused visibility of less that 2/10ths of a mile. Where the fog develops it could linger well into the morning.

Otherwise, Wednesday will see slightly warmer temperatures as most areas get into the upper 20s to low 30s. Wednesday night expect near steady or even rising temperatures out ahead of a strong cold front. That mild air with temperatures 30-35 will last until the front zips across the area early Thursday afternoon. At that time expect rapid changes and potential problems.

I'll throw an animation at you now which in a broad sense depicts what's going to happen. Watch as a low forms in Kansas, tracks to Missouri and rapidly intensifies as it rides the advancing Arctic cold front northeast into Illinois and Wisconsin.

That sparks a chain of events. First, showers are likely in advance of the front where the mild air resides. Then the front hits and winds switch to the N/NW and rapidly increase. These are the 10 meter winds gusts between noon and 6:00pm Thursday.

Temperatures at noon are near or a bit above freezing.

By 6:00 in the evening readings have plummeted at least 15 degrees into the teens.

Wind chill will be at or nearing zero.

If that's not bad enough, there is going to be a quick transition from rain to snow as the front passes. This is where some doubt enters the forecast. Overall, there is agreement that a low form and moves along the Arctic boundary (see the animation above). However, the precise location of the low, the forcing, and the amount of moisture will determine how long it snows and how much. The GFS has been steadily growing stronger on all the factors and drops a decent band of snow that impacts all but my far southern counties.

I'll show you the snowfall output but this is far from set-in stone and not a forecast. This is just the raw data that includes numerous models that a forecast will eventually be constructed from. This is what's known as guidance.

While snow ratios start high, the falling temperatures raise them well above the average ratio of 10:1 by the time it ends. The Kuchera method which takes that into account accordingly shows higher amounts. This is the GFS Kuchera style. 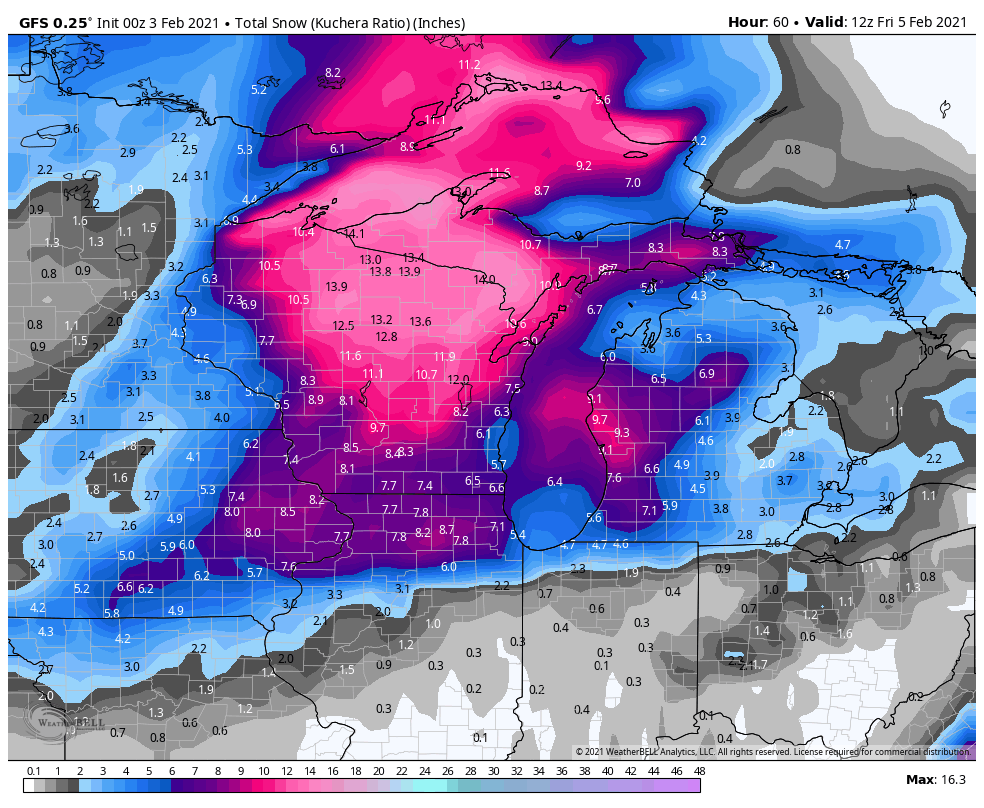 The EURO is actually in pretty close agreement with the GFS, just a little bit less on total qpf (precipitation). Here's the 10:1 snowfall forecast.

The EURO with Kuchera snow ratios.

Here's the hi-res 3K and 12K NAM. I'm just showing the Kuchera totals which are no joke, especially in the NW half of my area

However this turns out, there is certainly the possibility of 2-5" snows (maybe 6") over much of my area. Amounts of 1-2" appear more likely in the far southeast, again with the qualifier this is still subject to change.

Assuming this is in the ballpark (and I do I think it's reasonable), when you consider the deep snow cover that exists and it's icy crust. adding several more inches with falling temperatures and winds of 30-35 mph, blowing snow could become a real issue, especially in the open country. It is possible that a winter storm watch or at least an advisory will be issued for a good chunk of my area by the NWS. That is looking more and more likely to me.

The focus then turns to the frigid air that arrives over the weekend along with a couple clippers that could deposit some fluffy snow, especially in the south as they run along the southern fringe of the Arctic boundary. I won't get into that now as these types of systems are generally narrow in scope and tracks are difficult to see in the long wave pattern at this distance. Just keep it in mind.

The clouds from any clippers could also impact temperatures from really going in the tank, (mainly at night), but with fresh snow, plenty of it, and Arctic air in the mix the stage is set for sub-zero temperatures and dangerous wind chills. Just to give you and idea of what's on the table look what the GFS serves up Sunday.

From what I can see on a Tuesday night, we have some big ticket weather on the way the next few days. TSwails will keep you ahead of the trends. Roll weather...TS