SNOWMAGEDDON, ADD ANOTHER SCOOP THIS WEEKEND....

Misery loves company and our friends all around the Midwest have suffered through a month long assault of cold and snow. Chicago is one of the cities that's put up some exceptional snowfall numbers. In just three weeks time, O'Hare airport has measured 34.1" of snow. That's the snowiest three weeks since the epic winter of 1978-79 when 39.5" fell January 11-31, 1979. Midway Airport, closer to Lake Michigan reported 41.3" during that three week period.

For a little perspective, the average snow for an entire winter in Chicago is 36" and that was accomplished this year in just 3 weeks. That 34.4" total is also snowier than the entirety of 68 winters, that's half of Chicago's period of record!

Below you can see how the snow has come at regular intervals reaching a point where measurable snow accumulated 9 consecutive days February 8-16th. That ties the all-time record which again was set in 1979.

The Midwest Regional Climate center shows my area in the heart of snowmageddon with several spots already over the 50 inch mark for seasonal snow.

Of course, if it weren't for cold air there would be no snow. These are the temperature departures for the month of February. In Cedar Rapids the monthly departure is nearly 21 degrees below normal...that's per day! Extremely difficult to do.

Here's the past 10 days. In some areas the departures are 30-40 degrees below average. That does not register on the scale which only goes to 20 below normal. Florida is the one place in the lower 48 that's been really toasty!

That brings us the next storm and what it delivers in terms of snow Sunday. The operational models of the EURO, GFS, and Canadian GEM are all of the mind that a mid-level wave of energy will cross the region with several inches of snow. The high resolution models such as the 3k and 12K NAM are in another camp showing the significant snows falling north of HWY 20, across northern Iowa into Minnesota and Wisconsin.

The contrast is tied to the phasing of energy and the difference that makes in establishing the track and intensity of the storm. The hi-res models are designed to take advantage of mesoscale features within a short window of time, 84 hours or less.

Since we are on the edge of that window, I am uncertain if the NAM's depiction is valid. I am leaning the way of the EURO, GFS, and GEM which are snowier in my local area. That said, the hi-res models do carry some weight and I can't entirely discount them. I could easily see a compromise and I won't feel confident in any solution until we get a better consensus. With that here's what the 0z model runs show for snow late Thursday night. These are not forecasts, just model guidance which portrays the options on the table. At some point the guidance will converge on an outcome, hopefully soon. Until that time we watch and wait to see our fate. Here's the range of model solutions. 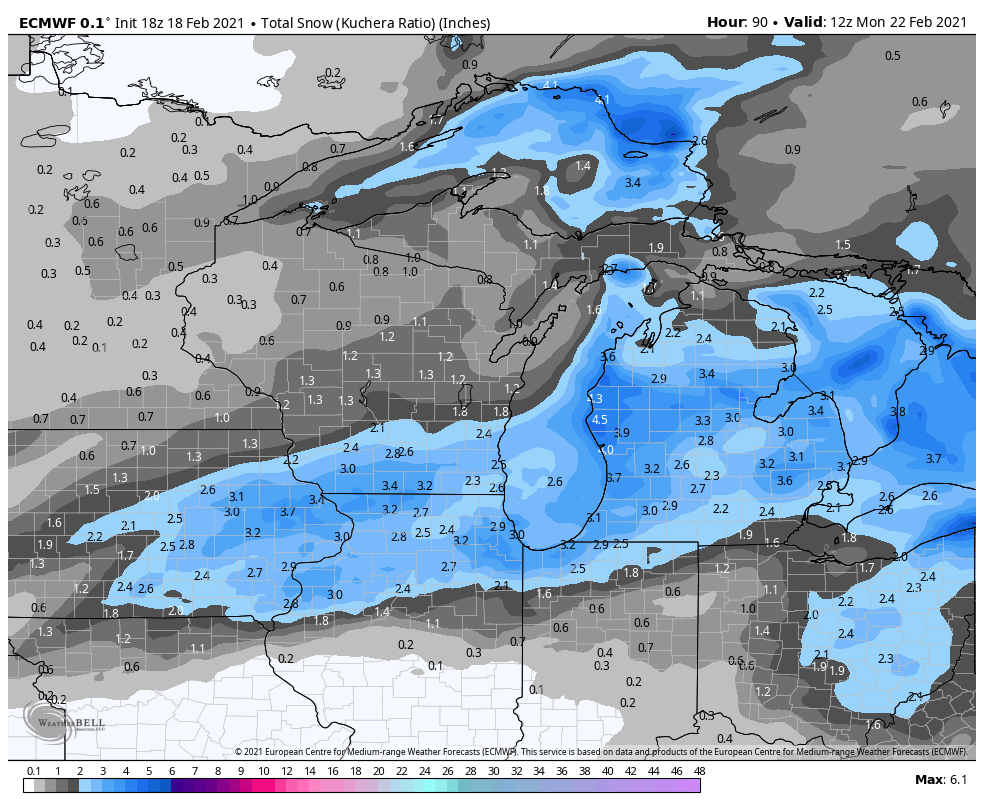 With that, I say the trend is your friend and I hope to see one that's consistent across the board by late Friday. Stay tuned and by all means, roll weather...TS

The second printing of my new book Derecho, Iowa's Inland Hurricane has just arrived and can be purchased below. However they are going fast and if you are interested in having the most authoritative account of this extreme event you need to act now. Don't miss this opportunity to own the weather story of a generation. You can order yours at derechobook.com See the book endorsements below

*I ordered one of your Derecho books about the storm in Cedar Rapids, IA back in December. I love it! I had also bought one that the Cedar Rapids Gazette sold. Your book by far is so much better, you have a lot more pictures and it just tells more of the story. Thank you for putting a wonderful keepsake together! Do you have any left? If so can you tell me how to get at least one more.

Thank you so much! Penny Brecke

Thank you for my book, the kind dedication and wonderful job on the book warmed my heart!! Loved all the info-great job Terry! Carolyn the stories brought tears to my eyes. I have to admit it was difficult to read at first-reliving that day, but joy also with the way you wrote them in such good faith! We are living in town as our house is still gutted. Work is slow but progressing. The damage was far greater than we thought, but it will be glorious again one day! Love and prayer.

*I received my book yesterday (just in time for Christmas). Thank you for all the hard work it took to put it together and trying so hard to get this book out. My husband will love it. Enjoyed your Christmas Video.

*Got the book today and am reading it now! Very well done. Thanks.

THERE'S A NEW SHERIFF IN TOWN...