TORNADO TAKES THE LIVES OF 6 IN IOWA...

We knew today was going to be a volatile day in the state of Iowa. Unfortunately it culminated in a large, violent tornado in the state and a long-track supercell that produced damage across central Iowa. The tornado was at it's most violent around Winterset, claiming the lives of six people - including two children.

There was extreme damage around Winterset, many homes an farms destroyed

This is the deadliest day for tornadoes in the state since the EF-5 in Parkersburg in 2008. The National Weather Service in Des Moines says preliminary surveys suggest the damage is at least EF-3 and they will release more information in the coming days.

This supercell was a long-track storm, producing tornadoes from southwest Iowa to eastern Iowa into the evening:

Here are all the storm reports from Saturday, primarily in Iowa and mostly tornado reports: 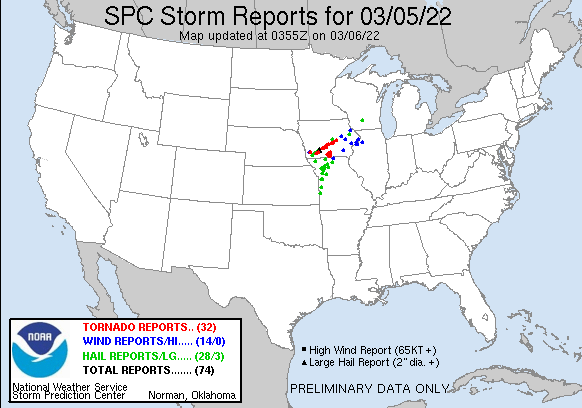 We'll get a count on the number of tornadoes in the state in the coming days. This comes just 80 days since the last outbreak on December 15th, 2021.

Now our attention will turn to winter with snow moving in Sunday night into Monday:

Here's the latest output from the Euro:

There's good consistency on placement but still some differences on amounts. Accumulation will be most likely near and south of Highway 20 with 1-4".

We then have several days of quiet weather which will allow for clean up in those areas impacted by the devastating tornadoes. We're hoping for a quick recovery and sending strength to those who lost loved ones on Saturday night.