UNUSUAL HEAT FOR THE HOLIDAY WEEKEND....

We're just about a week away from this years 11th annual storm chase. My exclusive sponsor for the event Dahl Ford, always allows us to ride in style, (and that's huge when you knock off 3,000 miles in a week). This year's team will travel in a brand new passenger van which is a change from the Ford Expeditions we've enjoyed in the past. Dan Medbury was responsible for the wrap and as usual he outdid himself. So a special thanks to him, the (Big Man), KV Dahl, Tim Thompson, and the entire Dahl staff. I personally have a 5 year old Escape from them and it runs like a champ. Someday I'm gonna get one of those big SUV's

So far, 2018 has been incredibly quiet in terms of severe weather and tornadoes. We're currently in the heart of the season here in the Midwest.

As of May 22, only 308 twisters have been reported which is right at the all time low.

Typically more than 1,000 tornadoes touch down in any given year, We might not reach the average in 2018 but I'll be very surprised if we don't significantly increase the numbers at some point in the next 2 months. The law of averages.

While the next 7 days do not look stormy, they certainly look steamy, especially for May. The 500mb jet stream pattern Sunday evening has an omega block centered over the continental U.S. With the ridge axis over the Midwest We get warm and so does southern Canada. 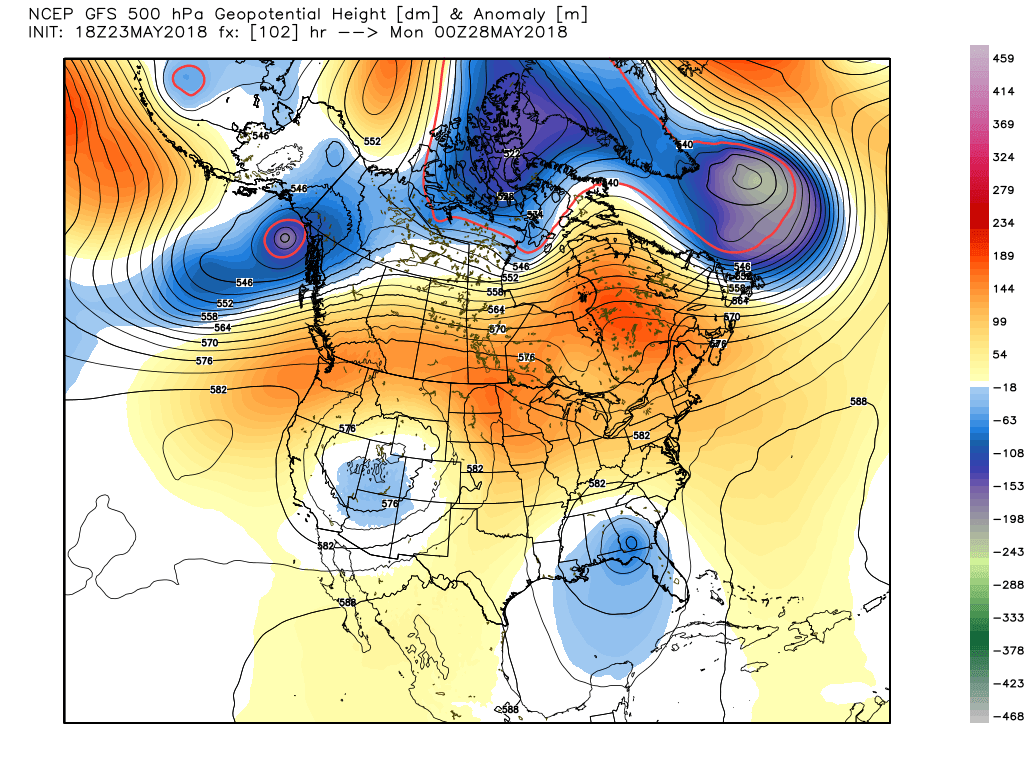 The temperature departures the next 5 days are showing an unusually warm holiday weekend. Highs in many areas should be near or above normal by at least 15 degrees.

The GFS meteogram in Minneapolis shows 6 consecutive days with highs in the 90s...the max at 94. Wow!

Humidity will also become a factor for the first time as dew poinst push 70 by the weekend. The GFS actually has mid 70s Sunday.

The moisture and humidity combined will get heat index values into the mid 90s.

And just for kicks, these are the actual highs Sunday afternoon. Readings in the Plains as warm as 109 in NW Oklahoma. Man, that's toasty for May.

Well, that's it for now. Not much going on outside of warm late spring conditions. Enjoy and roll weather...TS