We got it all to start December in the Midwest: snow, rain, ice, fog, wind... oh and tornadoes. Friend of the site Kholby Martin was out in Illinois and captured some of the tornadoes on Saturday afternoon.

These tornadoes form along a warm front that set up in north central Illinois, extending from a strong low pressure system. This is the surface map from from Saturday afternoon:

After early morning rain, there was enough dry time to allow the atmosphere to destabilize and all the parameters were in place for tornadoes. And there were multiple: 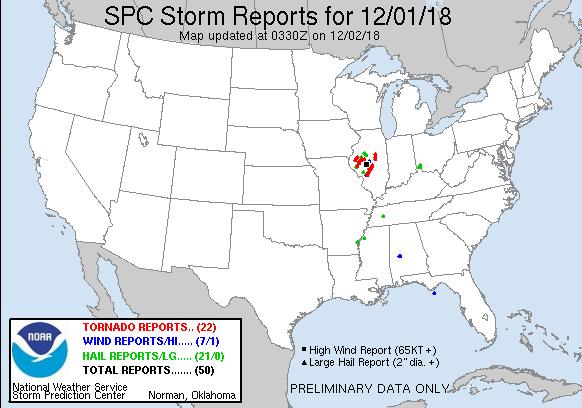 Impressive for December first... also impressive considering this time last week we were talking about a blizzard. Some parts of Illinois were experiencing thundersnow and a foot of snow last Saturday. A week later over 20 reports of tornadoes in Illinois alone.

There was still snow falling with this system. A strong early season storm producing rain, ice, and snow to the west.

Here's a look at the rainfall reports in Iowa - pretty good for December!

And snowfall reports across the Midwest, as of 9 pm Saturday:

Now colder air is moving in and there will be a transition to a wintry mix to snow further to the southeast through the day Sunday.

Here's the additional rainfall expected from Saturday evening through Sunday.

Regardless of any accumulation, it's going to get cold. Areas to the south of the snowpack will even feel the effects of the snow with a north wind bringing air in overhead.

Aside from the tornadoes Saturday winter is here to stay. The cold will settle in for the first week of December, and the weather should be fairly quiet once this storm passes through.