Down in the southeast, severe thunderstorms developed Saturday afternoon. Here's the storm reports from the southeast, which included a few tornadoes: 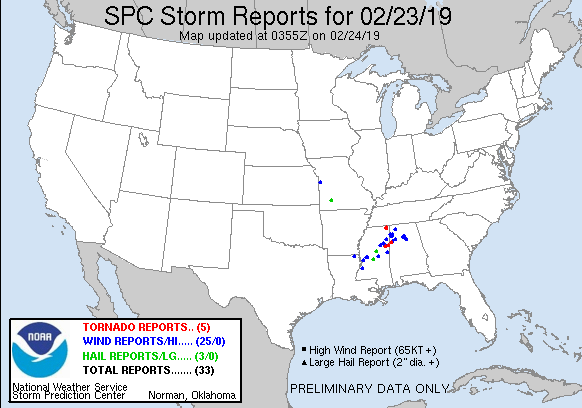 Further to the north there was heavy rain Saturday morning. Impressive rainfall for February and considering there's around 5-10" of snow on the ground in these areas.

This did lead to some flooding as rain fell and snow began to melt. There are additional concerns on area rivers now as the rain and melted snow runs off into rivers and creeks.

Then there was a transition to snow and strong winds, creating blizzard conditions across portions of Nebraska, Iowa, and Minnesota Saturday evening.

Above is a plow near Webster City, Iowa Saturday night. Many plows were being pulled from the streets in western Iowa due to the blizzard conditions. Highways were being closed as well in portions of Nebraska, Iowa, and Minnesota. Here are some of the snowfall reports as of Sunday morning:

Wide view across the Midwest:

The winds have been picking up through the night and there may be some wind gusts up to 60 mph Sunday morning. A rare High Wind Warning was issued through portions of eastern Iowa and Illinois. Check out some of the wind gusts Sunday morning:

There will be widespread 40-55 mph wind gusts across the Midwest through the day Sunday, which will create issues with blowing and drifting snow where any fresh snow falls. On top of the wind, temperatures will be fall through the day Sunday and will be back well below freezing by the afternoon:

The week will start off calm and cold, there may be a few flurries Monday and then some more snow showers on Tuesday into Wednesday. The active, wintry pattern continues...