A BIG TASTE OF NOVEMBER...

MUCHO GRACIAS to those of you who have dug into your pockets and paid the voluntary subscription fee to keep TSwails going. Your exceptional generosity is extremely appreciated. My goal going forward is to work full-time on the site, build it, add new features, and be my own boss! If you can, please consider a voluntary subscription to TSwails of $12 dollars a year ($1 dollar per month). The future of the site is dependent on your contributions. We hope you see the value and hard work that exists in the daily content. There are new features currently in development that I think you will enjoy. Thank you so much for your consideration and help. To subscribe click on the secure green box below.

I came across the spectacular image from NASA of an exploding star named Tycho.

In 1572, Danish astronomer Tycho Brahe was among those who noticed a new bright object in the constellation Cassiopeia. Adding fuel to the intellectual fire that Copernicus started, Tycho showed this “new star” was far beyond the Moon, and that it was possible for the universe beyond the Sun and planets to change.

Astronomers came to realize that Tycho’s new star was not new at all. Rather it signaled the death of a star in a supernova, an explosion so bright that it can outshine the light from an entire galaxy. This particular supernova was a Type Ia, which occurs when a white dwarf star pulls material from, or merges with, a nearby companion star until a violent explosion is triggered. The white dwarf star is obliterated, sending its debris hurtling into space.

To emphasize the three-dimensional nature of Tycho's explosion, scientists selected two narrow ranges of X-ray energies to isolate material (silicon, colored red) moving away from Earth, and moving towards us ( silicon, colored blue). The other colors in the image (yellow, green, blue-green, orange and purple) show a broad range of different energies and elements, and a mixture of directions of motion. You can see what you get. Stunning! Stuff like this makes me and my brain feel very much on the small side.

Closer to home, this image was taken a few days ago as the full moon rose over Chicago. Man, what a shot that is. It's from a tweet by Ameet Kini.

Here's something that's not so pretty. It's the 8-14 day temperature outlook from the Climate Prediction Center. I've been pounding this trend home for more than a week and I haven't seen anything today to back me down.

The GFS shows the depth and scope of the cold air. This is really impressive and the models keep getting colder and colder. These are the day 5-10 departures.

At this point the core of the cold is expected to be over my area around October 30th. That's when the departures look like this. That's a big time push of cold air...

The GFS operational run actually shows a little dusting of snow for some in the central Midwest.

The GEFS ensemble comprised of more members does not.

As I've been saying for awhile, if the air aloft is as cold as the models are indicating, lapse rates will be high. That certainly could drive enough instability for scattered snow showers or flurries. We've got a little time before we get to that point.

One thing is for sure, with the upper air pattern looking like this October 29th moisture is going to be in short supply with a pronounced NW flow. Chances for any high storm water content is very low. 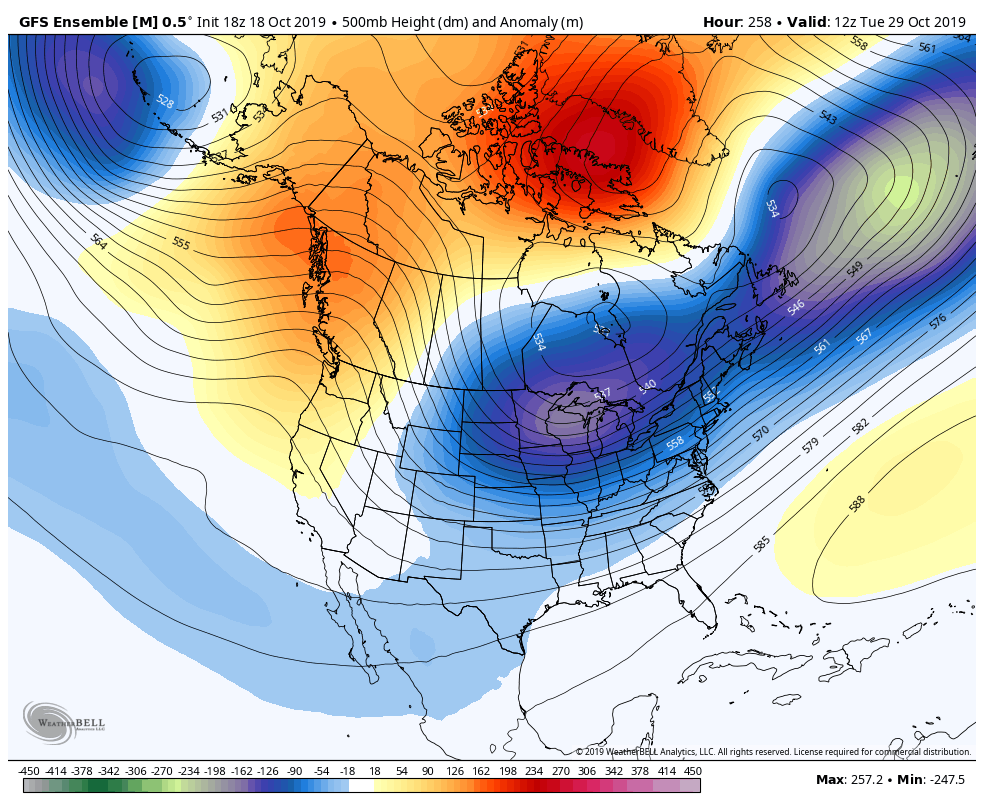 The 8-14 day outlook shows a high probability of drier than normal conditions.

Once again, I'm sure this comes as good news to farmers who have plenty of field work to get under their belts. Forge on and roll weather...TS