NO AWARDS FOR GOOD WEATHER THIS WEEKEND...

Cedar Rapids, what is it with you? After taking a direct hit from last summer's Derecho, you have added a tornado to you resume. A high shear low cape environment created the storm around 8:30 Wednesday evening. Thankfully, it was weak, small, and brief but it did generate 85 mph winds. The NWS survey ranks it EF-0.

The same storm also brought some heavy rain to parts of the area, especially the region near and south of a line from Fairfield to Galesburg where amounts of 1 to 1.5 inches were common. Bushnell, Illinois tallied 1.80. Amounts north of HWY 30 were significantly lighter.

The hi-res satellite shows the tight circulation of today's departing storm which created the shear that allowed the quick tornado spin-up Wednesday night.

It continues to bring showers, breezy conditions, and much cooler temperatures inside the cyclonic circulation on its backside. Temperatures mid-afternoon Thursday were as much as 25 degrees cooler than 24 hours earlier.

With the system slowly lifting north any lingering showers will come to an end in the south Friday morning and in the north by mid-afternoon. If all goes well, there may be some breaks in the clouds later in the day, especially in the south half. If so, highs here could reach the low 60s south of I-80. Upper 50s look more likely in the north where clearing is less likely.

As beautiful as last weekend was, the one ahead will see major payback. There have been significant changes in the track of Saturday's storm and if the EURO is right, many areas are now in line for a soaking rain. In the animation below you can see how the EURO spins a low into central Illinois driving a broad deformation zone directly over my area. Northwest of the track, we reside in the cold sector and a chilly wind driven rain now looks likely.

The EURO is pointing at widespread rains of 1-2 inches. It's also furthest northwest on the rain shield shoving it well into central Iowa. It shows this for rain totals.

The GFS is coming around to the idea and I suspect it will edge closer to the EURO solution in the next 24 hours.

With the rain and NE winds that could top 30 mph, Saturday's highs will not get out of the 40s west of the Mississippi. Flat out, it looks like a lousy day. 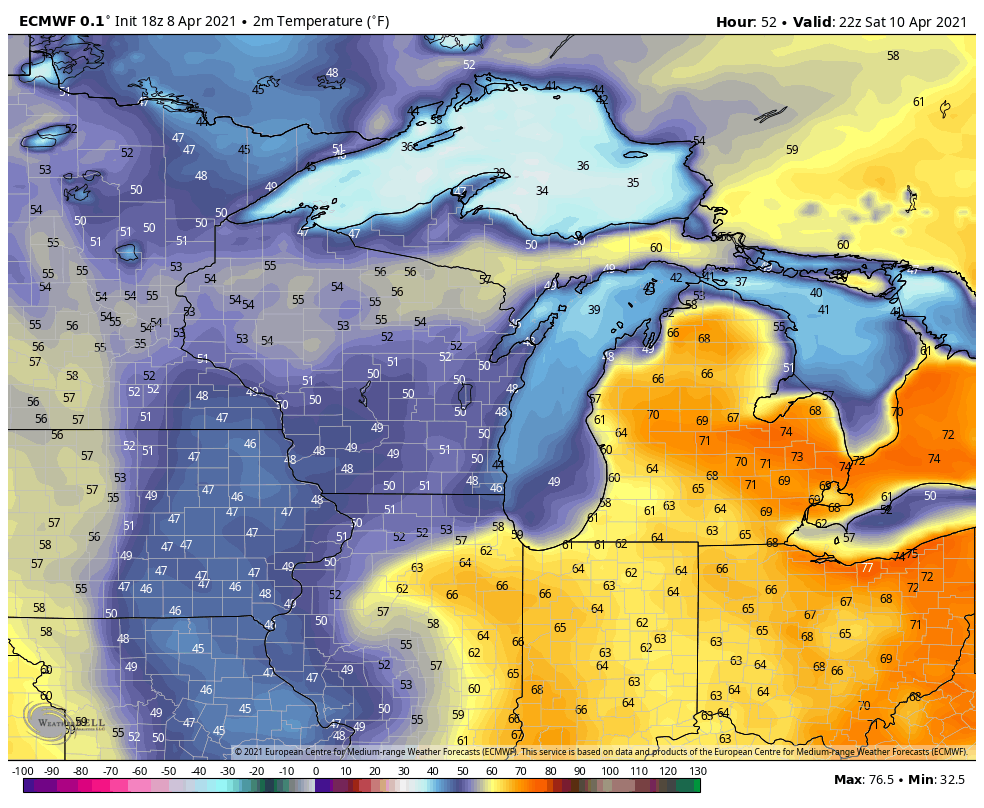 Sunday conditions will improve but how much depends of the speed of the system. The EURO still has some showers and clouds into Sunday morning before it tries to break the clouds late in the day. If we can get some sun, readings might reach 60 in the west, if not widespread highs of 50-55 are in the cards. We'll know more on that in the next 24 hours.

Beyond that, blocking in Canada will see to it that temperatures remain below normal much of the next 2 weeks. Here are the 7 day temperature departures April 13th-20th. That's light on spring.

Well, I suspect you've had enough bad news for now and I will leave it at that. Have a stellar weekend despite the elements. Roll weather...TS