Showers and thunderstorms are again playing tag with many parts of the central Midwest. A layer of deep moisture resides over the region with available water vapor exceeding two inches. Any storm that goes off in an environment like that has the potential to produce torrential rainfall (and it in a short period of time). Friday night's PWAT values.

In some locations, the amount of water vapor is twice what's normal at a time of year when it's typically high to begin with.

Thursday night an environment with similar moisture levels allowed storms to explode south of I-80 producing excessive rains of 6-10" in NW Missouri.

Some of that snuck into my southern counties with nearly 5" in Keosauqua and 4.1" at Woodhull. Much of the area south of I-80 knocked off another 1-3". Significant flash flooding was noted around Mt. Pleasant and Columbus Junction. 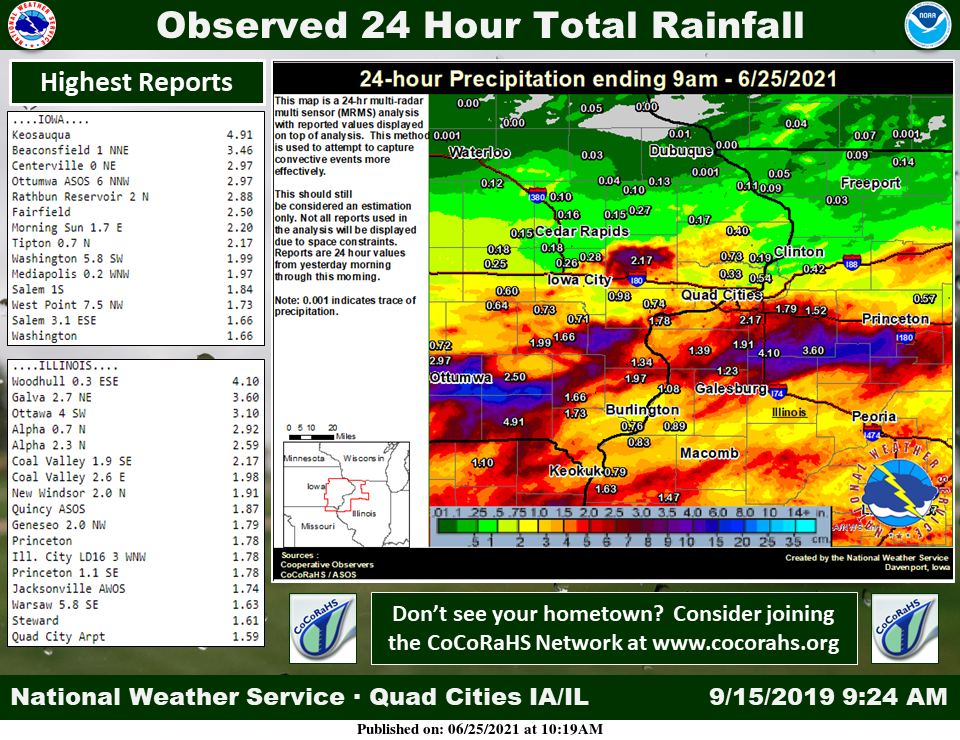 All the orange dots represent heavy rain or flash flooding reports from from Thursday nights event.

Friday night the situation is far less volatile as numerous boundaries are in place distributing forcing in a more broad brushed way. Additionally, convection in Missouri is having a negative impact on the feed of the low level jet and its ability to fuel storms further north.

That said, there is still enough instability for small pockets of heavy rain but they will be limited. Any place that can generate a storm could see an inch of rain but despite the high moisture levels, the lack of proper dynamics should keep the heavy rains contained to small pockets. My feeling is that rain totals come Saturday morning are likely to be minimal over the majority of my area. Here are all the warnings and watches in effect through Saturday morning.

Saturday, we remain in the warm sector indicating another warm muggy day with the threat of widely scattered showers and storms. Just like Friday, these will be hit and miss and there will be plenty of dry hours. However, where it rains, it's likely to pour, at least for a time.

Late Saturday night a weak frontal passage should end the threat of showers and storms from west to east. Skies are expected to turn partly sunny. Highs both Saturday and Sunday will generally be in the low 80s with plenty of humidity.

Next week looks unsettled as well but the rains currently look less intense. Much will depend on the amount of instability that can be attained and the timing and strength of any forcing. We'll worry about that next week.