SPIT ON THE GROUND, GET BACK ON THE HORSE...

Well, it's official. Monday's storm produced mixed results in the snow department. The preliminary autopsy reveals the cause of death in spots was likely tied to the systems slow decay as it moved east out of the Plains and into Iowa. The slightly weaker solution caused precipitation to be lighter and without stronger dynamics, especially in the south, evaporative cooling was hindered. This delayed the transition to snow, and in some cases created a significant period of sleet. In the end, it had an impact on snow amounts.

For those of you following the storm the past few days, I mentioned over and over the transition issue could be a serious caveat to overcome. Here's the final paragraph from my post Sunday night summarizing my thoughts. I'm still hesitant about how this all works out due to the transition from rain to snow. If its quick, the qpf is there for a sloppy 4-6" inches (maybe a few spots a bit more), most likely north of I-80. If things are slower, that will knock amounts down. Dry air and slight weakening could also have an impact. This is one of those situations where mesoscale parameters will play an important role in the outcome and models are not as adept in this type of role. About all we can do from here on out is wait, watch and adapt.

Overall the forecast wasn't a bust except for a 30 mile radius concentrated around Cedar Rapids. In Sunday nights post I showed the snow output of six major models. The average in Cedar Rapids was 5.7" and in the Quad Cities 2.1". From what I can tell in the snowfall analysis, 1" fell in Cedar Rapids and 1 to 2" totals were reported around the Quad Cities (with plenty of sleet mixed in). Models are intended to be used as guidance and not taken at face value. However, in the case of Cedar Rapids when the low end forecast is 4 and the high end 7 with a 6 model average of 5.8", you expect more than 1 inch.

Clearly I'm disappointed in the way things turned out in that part of my area. However, elsewhere (75 percent of the region) the totals were in the expected range. This is one of those examples where in most spots people were satisfied with the forecast. In others, there are those who are saying dude, how could you miss it by so much? Wish I had the answer! In retrospect I had a bad feeling about this storm and I'll tell it to you straight up, I'm happy it turned out at well as it did. There's a point in every forecast when you just can't set on the fence. There was more evidence for the snow than against it in the area around Cedar Rapids and I rolled with it and lost. I will say this, it's quite unusual for models to be so off in their solutions eight hours before the beginning of an event. Looking back, I think I would be hard pressed to do anything differently. A Tough break for me.

Just for kicks, here are the models from last night showing Mondays potential snowfall. None of these did well near and north of HWY 30 showing more snow than what ended up falling. So there you have it, from start to finish I took you through the six day process of forecasting a snow event. The highs, the lows, and everything in between. This is where I put it behind me, learn what I can and move on to the next storm. As frustrating as it can be, the challenge of getting it perfect always brings me back for more. When things don't go as planned, it certainly isn't for lack of effort. Spit on the ground and get back on that horse.

The GFS (all the models below are from Sunday night).

THE NEXT STORM UP...

Tuesday is a transition day as Monday's storm departs and Wednesday's approaches from the west. A dirty ridge between the two will trap moisture and diminish winds. The end result will plenty of clouds and potentially some fog until precipitation returns Wednesday night. Temperatures are expected to be well below normal in the 30s where there is snow and the 40s elsewhere.

The midweek storm is another significant one with some excellent upper air support. You can see another bowling ball at 500mb coming across the Plains toward the central Midwest. It has a really tight energetic look and will again tap into ample moisture.

Two days in advance of the storm SPC has already issued an enhanced outlook for a severe weather outbreak Wednesday across the SC United States. This has a typical La Nina look and I anticipate a significant tornado threat if instability is realized. Some big-time shear is evident and this has the makings of a dangerous and perhaps deadly severe weather day.

With the storm center tracking south of my area we again are situated in what's known as the cold sector. In the surface depiction Wednesday evening you can see the surface low cutting through Missouri. Chilly east winds and rain are moving into the area.

Precipitable water vapor climbs into the range of .70 to 1.00 inch from north to south. Another wet system which brings the potential of moderate to heavy precipitation, heaviest in the south half.

This is what the latest models are indicating for precipitation potential.

With the strong dynamics and a decent surface low there is the potential that as the system moves east there could be enough evaporative cooling for rain to mix with or change to snow, especially in my northern counties. Fortunately, this system is even shorter on cold air than the previous one or this would be a big snow event for my area! As it is, most models at least hint at a snow threat in some part of my area. The EURO is the least aggressive and furthest south. The GFS and 12K NAM are more problematic. Here's all their snow outputs along with the GEM. 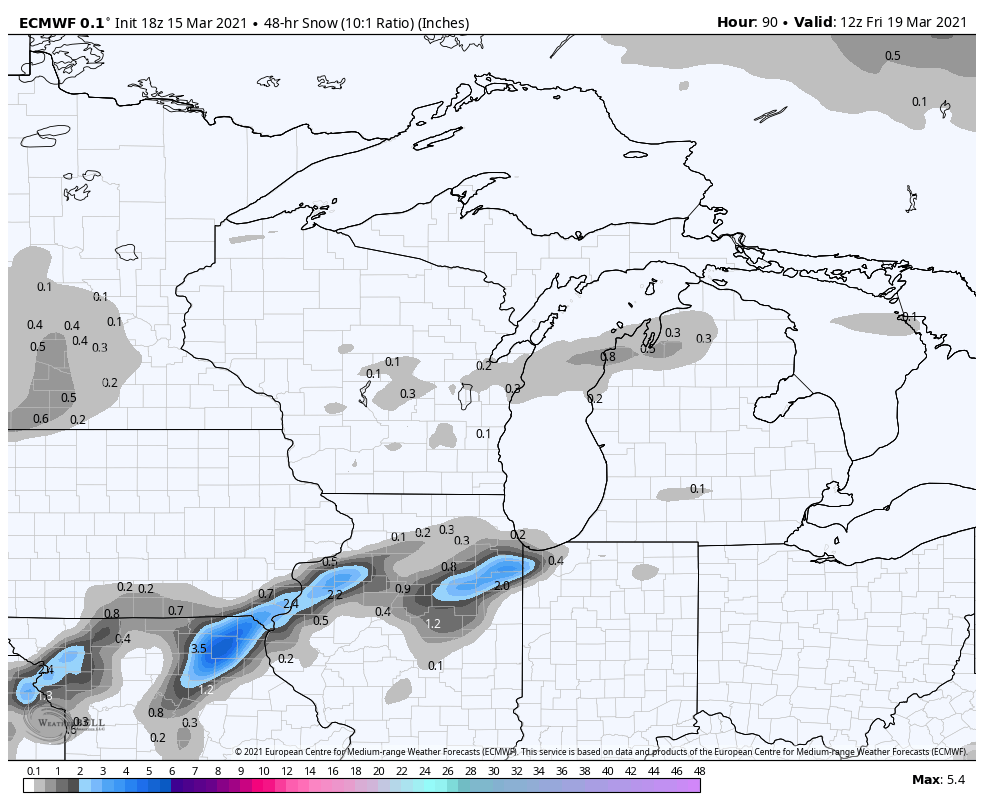 Once again we run into the same issue we had with the previous storm which involves that transition from rain to snow. When does it happen and where? All three models came in snowier Monday night than in the days earlier runs. The 12k had no snow at 18Z and 6 hours later the above run has gotten very excited about it.

I'm sure you were already anticipating this but we are going to need a little more time to assess the developing trends. I would be a bigger fool than I already am to try and call this set-up so early. What I will say is that I've seen this type of storm many times in my career and I think the odds are good that some part of my area sees at least an inch of snow. OK, I'm shot for now. However, a little rest and I'll be ready to fight another day! Where's that horse, where's my boots, hat and saddle? Roll weather...TS

TURNING THE FAUCET BACK ON....