THAT WAS SOME PARTY...

Every party's got a pooper (so the saying goes) and ours has come in the form of a cold front. It's brought showers and thunderstorms and a downward trend in temperatures that will be readily apparent today. However, it was a heck of a party while it lasted with most areas celebrating 5 consecutive days with highs above 70. Here's the numbers in Cedar Rapids since April 1st. The top 2 rows show the highs, the bottom 2 rows the departures from normal.

Here's another perspective which also shows lows over the same 7 day stretch.

I also thought this was really interesting. It shows the high temperature departures since the beginning of 2021. You take out the wicked 17 day cold snap in February and we have been predominately above average this year and by a healthy amount. I was unaware just how mild overall the year has been. We really have nothing to complain about.

This is also a stunning graphic I came upon from the Iowa Mesonet. Thanks to the dry, sunny, mild weather, the 4" soil temperature in central Iowa around Ames has reached 62. The average for the date is close to 42. Typically Ames would not reach the 62 degree threshold until about June 1st. That is a freaky almost scary statistic!

Well, the party is over and as I mentioned in my post yesterday, we are entering an extended period where temperatures are expected to average below normal.

The GFS ensemble is just depressing with a meteogram the next two weeks that shows the majority of our highs in the 40s and 50s. That's lame.

The EURO out 10 days isn't any better. 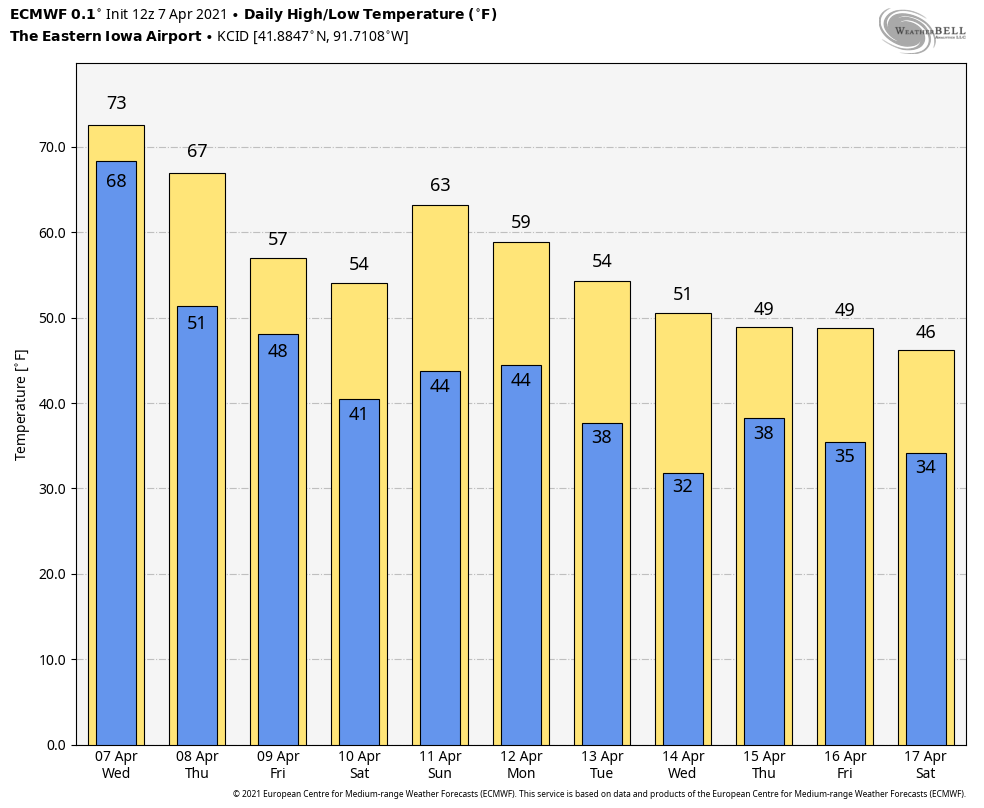 The change is all tied to blocking at higher latitudes across Canada and Greenland. That will produce lower heights and cooler temperatures in the mid-latitudes. The system which initiates the change is shown below spinning through the central Midwest.

It has tapped into the instability brought on by the recent warmth and moisture and generated showers and storms. You can see a healthy band of rain advancing on my area out ahead of the cold front Wednesday evening.

There were a couple thunderstorm warnings issued for my southern counties where some hail was reported in SE Iowa and WC Illinois.

With the system slowly pulling away thunderstorms are out of the forecast Wednesday but scattered showers will still be a threat from time to time into Friday. You can see in this animation how the showers rotate around the upper low as it drifts into Canada. Overall, the rain is light and there are dry hours. However, with plenty of clouds and colder air wrapping in behind the disturbance, cooler temperatures invade. Highs Thursday though Saturday will remain in the 50s.

Another disturbance is hot on the heels of this one and it arrives to revive the rain Saturday. With the expected track the heaviest amounts will be east of the Mississippi, especially SE of the Quad Cities. Little if any rain is expected NW of a line from Cedar Rapids to Dubuque. The EURO suggests this for totals from this system Saturday afternoon and night.

Conditions improve Sunday and Monday as rain chances depart but temperatures will remain cool in the range of 55-60, that's below normal. Next Tuesday another shot of cold air arrives and chilly unsettled weather returns.

By the way, today is the anniversary of the great April blizzard which hit most of Iowa back in 1973. During the days of April 8-10th, 20" of snow fell in Belle Plaine and 19.2 was measured in Dubuque, with many areas experiencing amounts greater than a foot. Winds of 65 mph produced drifts in some parts of the state up to 16 feet high.

Most plows had been dismantled for the season and roads in many areas were closed or down to one lane up to 3 days, especially in rural areas. Even I-80 near Iowa City was closed for a period. I was a junior at Iowa City West and we did not have school for 3 days...unheard of at any time, let alone April. Here's a picture of Blair's Ferry road drifted shut with stranded cars in Cedar Rapids.

By the time it ended, 14 deaths had been attributed to the storm, many of them people who had suffered heart attacks while shoveling snow. Two people died of exposure. One was killed in a seven-car accident west of Forest City in north-central Iowa.

Desperate farmers called county road maintenance, trying to get roads cleared so they could feed their livestock or get them to the farmyard. Efforts to clear the roads were hampered by stranded cars and blowing snow.

The Iowa Conservation Commission estimated thousands of bluebirds and purple martins — which had begun their northward migration — were killed by the freak storm.

So many improbable things had to come together for a storm of this magnitude in April that I consider it Iowa's perfect storm and one of the all-time great weather events to impact the state. I remember it vividly! Roll weather...TS