TIME TO TURN UP THE HEAT...

After days of speculation, conjecture, and anticipation, spring like warmth begins its push into the Midwest this weekend. One of the issues we knew would have to be overcome to reach the goal of sixty degree highs was snow cover. Just two weeks ago the area north of I-80 was blanketed in 15-20 inches of snow. Independence reported a 23 inch depth!

Friday morning amounts in the north had been reduced to the 1 to 5 inch range.

By Saturday night the EURO shows amounts down to this.

With that bare ground the door is open for the significant warmth I've been advertising for two weeks now. However, you do need a transport mechanism and here it is, the 500mb jet stream. See how the SW flow is aimed at the Midwest and Great Lakes.

The surface map Tuesday shows the brisk SW surface flow that's in place between low pressure over South Dakota and an extensive ridge of high pressure over the southeast.

That also taps Gulf moisture and precipitable water vapor is still forecast to be substantial with all of my of my area showing values greater than an inch.

That's 250 percent or more above normal values. (About 3 standard deviations)

The moisture brings into play the possibility of rain Wednesday as a cold front sweeps into the area late in the day. The timing of the front is going to be critical. If the low level jet can impinge on the boundary some storms could pop with at least local pockets of heavy rain. The best chances of this happening seem to be near and east of the Mississippi. There will be some instability with dew points potentially reaching the mid 50s as you can see below. Note the colder drier air pouring into central Iowa behind the front.

K index values up to 35 support the threat of some thunderstorms along the front Wednesday afternoon or evening, especially over the southeast. Despite the moisture, the dynamics at this point don't seem supportive of more than isolated storms and just a few narrow bands of rain 1/2 inch or more, mainly over the SE.

The EURO is certainly not very excited about rainfall prospects showing this for totals.

The GFS is the model that hints at the convection along the front and shows some moderate rain amounts southeast of a line from Iowa City to Freeport.

We are still days away so minor changes could make big differences and this is an aspect of the forecast that needs to be watched, particularly with saturated grounds from melting snow.

Now, let's take a look at highs Monday through Wednesday which are a thing of beauty after a long winter. This is what the EURO indicates. 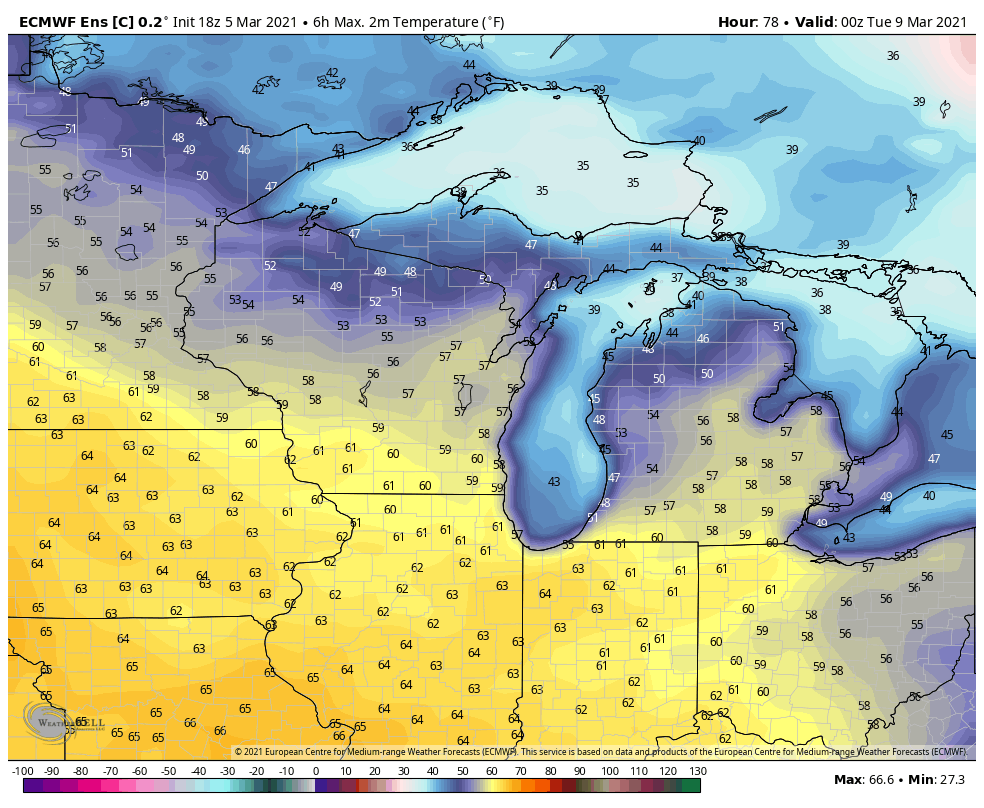 As we are well aware, all good things must come to an end and the passage of the cold front Wednesday night initiates a change to colder weather that could be quite significant towards next weekend or just beyond. The MJO continues a progression that seems to be leading it out of phase one and towards 2 and 3 towards March 20th.

As you can see in the phase correlation diagrams, phase 1 is cool but 2 and 3 are prime for widespread cold in March. That's concerning. The EPO is also shown trending negative which is also a cold teleconnection that lends credibility to the idea.

As I've indicated several times, I'm afraid the second half of March could see the return of a wintery pattern that would include cold and perhaps snow. Nothing like we went through in February but far from spring. Let's hope I'm reading the signals wrong or something changes. For now, let's live in the moment and enjoy the mild days to come. Roll weather...TS

I will take this opportunity to mention that I only have 30 copies left of my book on the most expensive thunderstorm in United States history (11 billion dollars in estimated damage). This will be the final printing. If you are interested in having the most authoritative account of this extreme event I would suggest you act now. Don't miss this opportunity to own the weather story of a generation. You can order yours at derechobook.com