After an active start to May the weather is starting to back down. There were multiple days of severe weather in the central U.S. which ended Friday. Thursday afternoon there were a few strong and severe thunderstorms and a few tornadoes reported in Iowa. 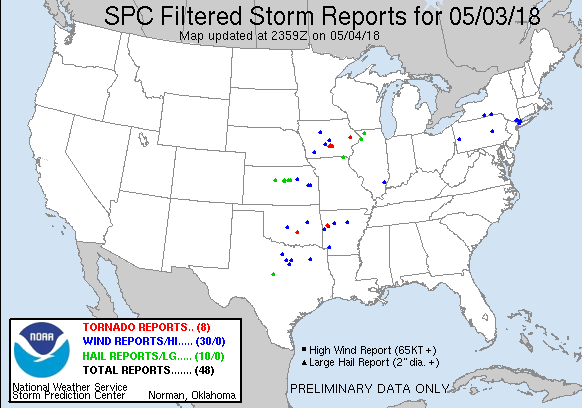 In my local area an EF-0 tornado occurred in Jones County near the town of Olin. The tornado was brief and developed just along a line of storms. The most notable part of Thursday's storms was the rain.

Heavy rain fell in northern Iowa - where 2 to 4" were common. There was also heavy rain in the days before in southern Minnesota. That water is now moving downstream and is leading to rises on the Turkey, Cedar, and Mississippi rivers.

Flood Watches and Warnings are posted along the rivers. There has already been flooding in Spillville, Iowa due to the Turkey River coming up over it's banks. There is always difficulty in forecasting crests on rivers, but the potential exists for moderate flooding along the Mississippi in Dubuque down through the Quad Cities.

The good news is the weather will be calm for the next several days. Rainfall is expected to be light over the next five days in these areas.

It is going to be dry and comfortable this weekend with low humidity.

There will be a weak front that moves through Sunday and will lead to a few scattered showers and storms early in the day.

Dry air takes over as we start next week which will help with the flooding on the rivers and give us some time to dry out.

At least it's greened up around here... enjoy the calmer times! RK