GETTING BETTER, PLUS SOME MONEY SHOTS OF MAINE.

All you need to know about the weather in the central Midwest Monday shows up nicely on the mid-day GOES satellite image. Extensive clouds are pinwheeling around an upper-air low that is virtually "creeping" southeast over central Illinois.

Clouds, brisk winds, and spotty sprinkles and showers made for another sub-par day. Here's temperatures at 3:00 pm. Not bad if it was an early March day.

Normal highs are now in the low to mid 70s and as you can see in the departures we were running 12-17 degrees below that.

Fortunately the showers that fell were light and in most spots didn't amount to much. It was a different story to the east though where parts of central and eastern Illinois had some soakers of more than 1/2 inch. See the Doppler estimates below.

For the entire storm which kicked in Saturday amounts exceeded 2-3" in parts of NE Illinois and Wisconsin. This Doppler estimate from Saturday evening through Monday evening shows some of the heavier totals in the Chicago metro area where some spots racked up 3 inches..

Tuesday will be a day of transition and gradual improvement around my local area as the upper air low makes a move southeast going from Illinois to Tennessee by evening.

The proximity of the low will still be close enough that passing clouds and spotty brief showers will still be possible, especially east of the Mississippi. Best chances for some breaks in the clouds and sunshine will be found over eastern Iowa allowing somewhat warmer readings there. However, highs will still be on the cool side with 60s the order of the day.

Last week I was pushing the agenda that it looked good for 80s Thursday and Friday but the omega block that's set-up shop has altered the game. Slower to break down and shift east it has delayed the arrival of the thermal ridge and its associated warmth. Even so, all is not lost as very pleasant weather arrives for the middle and end of the week, it just won't be quite as toasty.

The latest trends show 70's returning Wednesday with mid to even upper 70s Friday. Just as nice, skies should be mostly sunny after the clouds depart Tuesday night/Wednesday morning. As for rain, I don't see much of that until Friday night or Saturday. I'll get into that and the holiday weekend forecast in my next post.

I've been in Maine now for two weeks and decided it was time to take a day trip. Sunday the family and I headed north out of Portland to what's known as the lake's region of Maine. We got as far north as Norway, Maine which claims the title of having the tallest tree in the state. It's a white pine that stands 155 feet high. I wouldn't go out of your way to see it.

As you can see below, the lakes region less than an hour from where I live is loaded with lakes. I like that. We did stop at Sebago Lake which is the second largest in Maine. 360 feet deep in the middle. The water was COLD!

We also visited Bridgton and stopped at a Highland Lake. I took a picture at sunset but it doesn't do justice to how beautiful the scenery is. Off in the distance you can see the White Mountains poking into the sky Add some serious pine tree scent and you have yourself a real slice of nature. I so wanted to get the fishing pole in the water but I do not have a license yet. That will be changing soon. 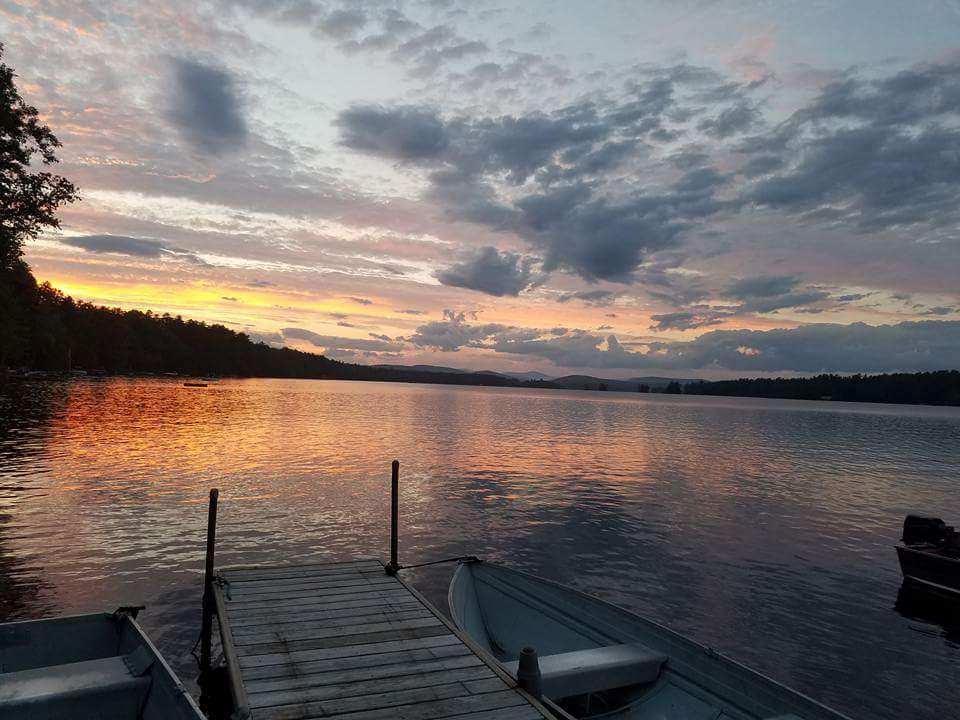 The other thing about the lakes is the clarity of the water. In this shot you can see the rocks below the surface along with the reflection of the clouds above.

A short distance away is Naples on Long Lake and that's a heck of a view too. To give you and idea.

This is Naples in the winter. I will be checking that perspective out when the time comes in 5 or 6 months.