IF IT'S NOT ONE THING IT'S ANOTHER...

Before we get to the wet weather in our future, I wanted to mention the record lows that were established Tuesday morning. In a year with plenty of extremes, this is just another notch on the belt. Cedar Rapids was the coldest official location dipping to 43, nipping the old mark of 44 set in 1902. Dubuque tied its record of 44 established in 1963. Sparta, Wisconsin went all the way down to 35 and Leota, Michigan hit 27. Yikes!

Here's some of the regional lows reported by the NWS Quad Cities. 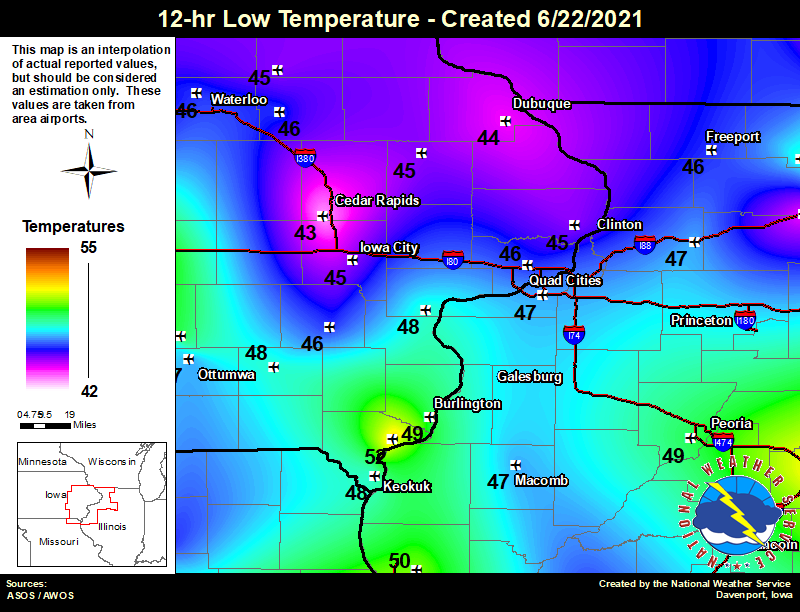 The Canadian high that brought the fresh late season chill rapidly moved off to the east. The return flow on its backside generated extensive warm air advection Tuesday night which spawned showers and storms, some of which brought more beneficial rains to parts of the area. Any lingering rain should peter out by late morning and the remainder of day will be warm and more humid with highs generally in the low 80s.

After that things get complicated but the screaming message is that the potential is there for significant rains to accumulate Thursday through Friday night. Models are struggling a bit with the precise details but the general idea is that a cold front will press into the area late Thursday and eventually stall near the southern Iowa border. It wanders around in that area until a surface wave forms and swings into southeast Iowa Friday night or even Saturday. The offshoot of all this is that forcing and abundant moisture will be in place for "occasional" showers and storms through that period.

Precipitable water vapor on the EURO Friday night is 2" or greater across the southern half of my area.

That's up to 2 times more than normal so moisture is not an issue.

In this type of environment thunderstorms can be big rain producers (1-2" per hour). Additionally, with the front aligned nearly west to east showing little movement, training of cells is probably which could lead to a swath or two of 3-5" rains...perhaps a little more. The question is where and it's too early to say with high confidence. The Weather Prediction Center (WPC) has my area covered in a slight risk of excessive rains.

While the ingredients are in place for multiple round convective events, models are still not in full agreement on the placement of key features and the heavy rainfall bands. That should improve in the next 24-48 hours. Despite these fluctuations, there is an increasing signal for significant rainfall totals and WPC may issue a risk upgrade in future outlooks for some part of the area.

As it stands now, the official WPC outlook shows this for 5 day rainfall totals. 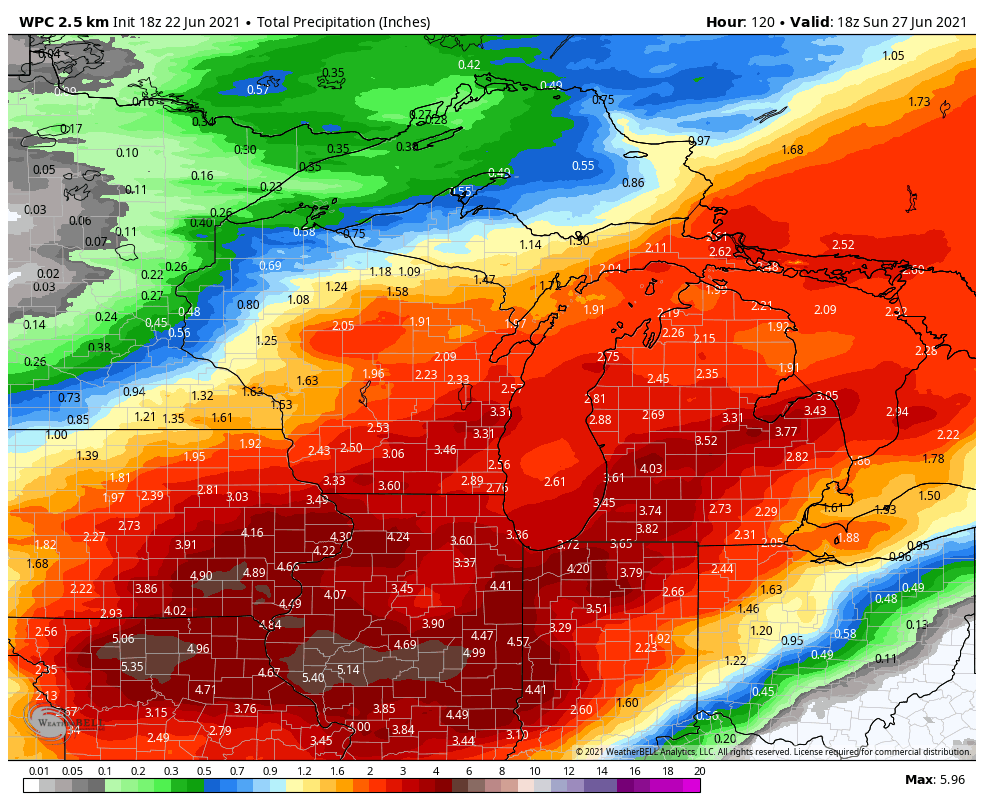 The latest EURO has this.

The other issue to watch both Thursday and Friday is the severe weather threat. Depending on where the front sets up and the amount of convective debris that exists, there will no doubt be substantial CAPE (instability) in spots, a good indicator of severe weather potential. The Storm Prediction Center does have risks in effect both days. This is Thursday's outlook.

So now, after all this warm dry weather to start June, places are looking at the potential of flash flooding if the rain materializes to the degree models are indicating. If it's not one thing it's another! Roll weather...TS