I ordered one of your Derecho books about the storm in Cedar Rapids, IA back in December. I love it! I had also bought one that the Cedar Rapids Gazette sold. Your book by far is so much better, you have a lot more pictures and it just tells more of the story. Thank you for putting a wonderful keepsake together! Do you have any left? If so can you tell me how to get at least one more.

Thank you so much! Penny Brecke

It was more of the same around the area Wednesday with well below normal temperatures and a bit of light snow. Fortunately the snow was nothing more than a dusting and was confined to the area from I-80 south. With highs hovering around 10 and wind chills below zero it was a day that I would liken to kissing your sister. Here's the reported lows. 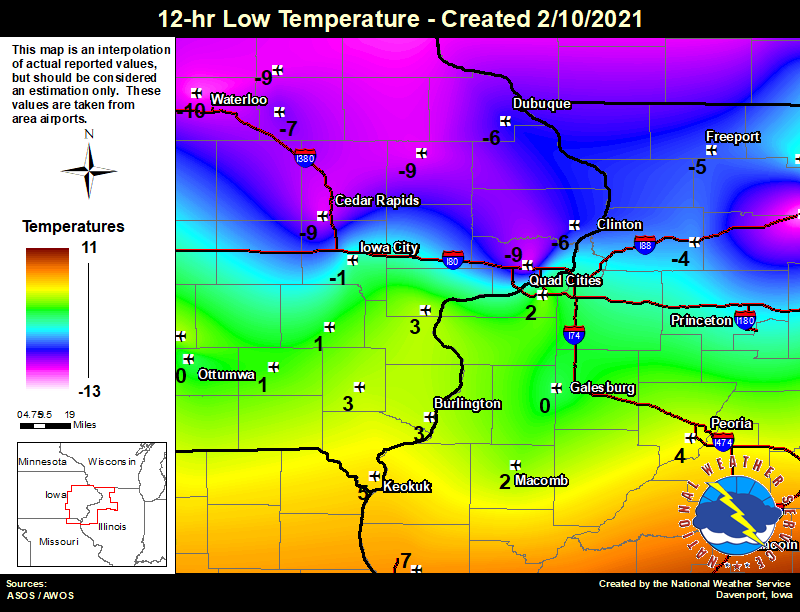 The worst of the cold stayed further NW with Silver Bay, Minnesota falling to 36 below with Ely right behind at -33.

Thursday morning brings another fresh start with temperatures below zero, especially north and more of those mean wind chills. A wind chill advisory will be in effect to start the day from the Quad Cities NW.

The HRRR depicts these readings just before daybreak. Clouds keep it warmer in the south.

Everybody gets in on the fun though with wind chills which that reach into the range of 10 to 25 below.

The cold in varying degrees will dominate the pattern the majority of next week. These are the temperature departures on the EURO the next 7 days. Most of the area should end up 20-25 below normal per day through February 17th.

The EURO continues to bring severe cold Sunday through Monday but the EURO handles the pattern differently and does not allow the worst of the cold to penetrate my area and is 10-20 degrees warmer. Still below zero but only 5-15 below instead of 15-30. I would side with the warmer EURO but a clear sky night with light winds will allow temperatures to free fall towards -20 in the north. Wind chills would be less in that set-up. There's your trade-off.

To give you and idea of the depth of this cold air, this is what the GFS operational is showing for snow over the next 16 days. Heavy amounts are shown deep into the heart of Texas, NW Louisiana, and Arkansas.

Southeast of that, sleet and freezing rain sets up from El Paso to New Orleans then into Mississippi and Alabama. The weather is going to be making headlines the next 2 weeks in a regular basis.

For the central Midwest. snow is going to fall at times Thursday through Saturday. However, consistency among models in this noisy pattern has been shaky from model to model and run to run. The emphasis for snow Thursday is focused more on the northern half of the area, especially north of HWY 30. It's possible a winter weather advisory could be issued at some point for the region near or just north of HWY 30.

The 3k NAM shows this for totals today. This is using the Kuchera method which accounts for high snow ratios which may be 25:1 (or more).

After that passes, the next wave is centered more on the south half later Friday, mainly HWY 3o south. Again, I'm still using the hi-res 3k NAM

Between the two waves, this is what the 3K shows for 60 hour totals.

This is a tricky little snow forecast with some unique temperature profiles to deal with and my confidence is moderate that most areas by Saturday evening will see new snow totals of 1 to 4" (perhaps 5" in a few spots). I'm a bit less confident on the precise location as these snow bands can be narrow and intense with large fluctuations in amounts over short distances. We'll just have to watch it but one thing's for sure, snow and cold are still ruling the pattern. Roll weather...TS