MARCH-ING TO A DIFFERENT DRUMMER...

Make no mistake about it, our weather has made a dramatic change for the better and we're going to be "March"ing to that beat the first half of March. Here's the upward trend in temperature departures over the past 7 days.

Look what that has done to snow cover across the nation. February 16th a record 73 percent of the contiguous United States had a blanket of snow. Most of my area reported 10-20 inches.

Thanks to the recent thaw, the national average is now down to 29.8 percent. My far southern counties have nothing left but piles. Just look at that dramatic change. 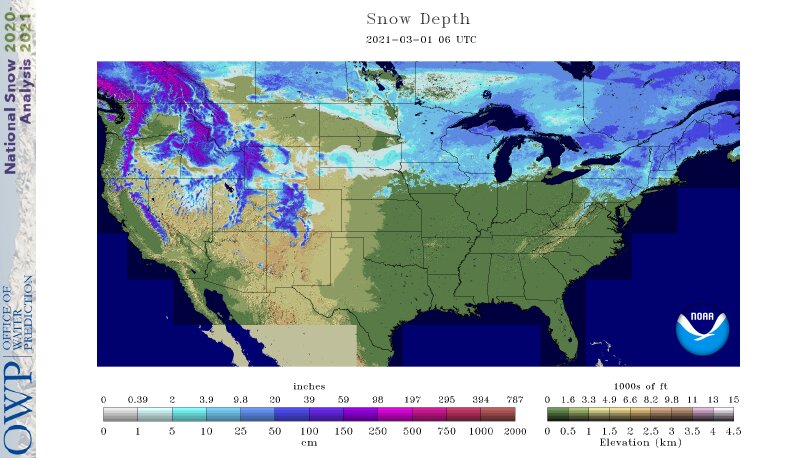 I also thought this was interesting. According to the Iowa Mesonet, some part of Iowa has been impacted by 23 winter storm events so far this winter. That's the same number as last year on March 1st. I never would have expected that. I guess the difference this year is that that many of these came in a relatively short period of time with little in the way of melting. This is the total snow from all of last winters storms.

Here's where seasonal accumulations stand this year. Most areas are 15-25 inches ahead of last year.

Also, it turns out last year ended up with 29 winter storm events with the last widespread snow not until April 17th. If you read between the lines that's 6 weeks from now and I suspect we are far from ending this winter despite our recent good fortunes. Here's last years snow event April 16-17th...generous in the south!

Before I get to what could be bad news, lets talk about 60 degree highs in the period March 8-10th. I brought that potential up a week ago in a post and so far it remains a realistic goal. Both the EURO and GFS have highs in the 60s March 9th and 10th. These are the numbers on the EURO. The last time the high reached 60 in Cedar Rapids was November 19th (69 degrees).

So here's the rub, the MJO (Madden Julien Oscillation) is on the move and the GFS has it rolling into 8. Follow the dotted green road.

We're still good at this point as 8 is a friendly phase during March as you can see in the phase correlation below. Mild and dry all around the Midwest.

After 8 though, the GFS drives the MJO through 1 and into 2 (and from there most likely into 3). Notice the major cooling associated with those emerging phases. A chilly signal indeed if the model verifies.

For some confirmation of the trend, I'm displaying the EPO (eastern Pacific Oscillation) from the EURO Weeklies. Notice it goes deeply negative after March 15th. That tells me to look out for a strong western ridge that would deliver the type of cold phases 1-3 are hinting at.

Sure enough, the EURO 500mb pattern is in sink with the EPO showing the big ridge out west and the trough over the east March 21st. That looks very fresh!

As you would expect, the temperature departures March 15-22 are back in the tank!

So for now, just put this information on the back burner and focus on what's ahead. For one, warmer temperatures. These are the EURO ensemble departures the next 6 days, (through Sunday).

This is the total precipitation for the same period. In most cases none.

There you have it, the long and short of March. As usual, it will be a thrill ride. Roll weather...TS

I will take this opportunity to mention that I only have 42 copies left of my book on the most expensive thunderstorm in United States history (13 billion dollars in estimated damage). This will be the final printing. If you are interested in having the most authoritative account of this extreme event I would suggest you act now. Don't miss this opportunity to own the weather story of a generation. You can order yours at derechobook.com