SORRY LEPRECHAUNS, NOT THE BEST OF DAYS...

Happy St. Patrick's Day everyone! The luck of the Irish won't be fully with us today as a potent storm brings clouds and rain to many of our shamrocks as it works its way east across the southern Midwest. The complex system is a wee bit short on cold air which means its cold sector where we reside won't see much snow. But lo and behold, a few flakes could be found here and there. Here's the system getting set to eject out of the Rockies Tuesday night.

One notable change from yesterday is a southward shift in the overall track of the storm. It's an important trend for my area as the heavy rain which looked likely for many areas yesterday will be confined to the far southeast. From Washington, Iowa to near the Quad Cities and on south of Sterling, Illinois some moderate rains are still a good bet. However, it's the area near and south of HWY 34 where the heaviest amounts are expected, perhaps greater than an inch in places like Burlington and Galesburg. Here's what the latest models indicate.

Models have been having their struggles with evaporative cooling and any resulting snow. The southward shift now favors the far south for any potential wet snow accumulations. If that were to happen (and it's a big if right now) it would be late Wednesday night before top down cooling allows it. I will also mention that the EURO tries to kick out a little wet snow early Wednesday in my far northwestern counties on the leading edge of the system. In my opinion this is far from a sure thing but worth a mention there could be a dusting on a line from near Cedar Rapids to Dubuque. As you can see totals are minimal early in the day Wednesday and in most areas its rain.

As Wednesday progresses, occasional rain falls especially southeast of a line from Cedar Rapids to Dubuque as the storm edges closer. By evening the rain ends NW of the Quad Cities but south and east of there continues in the southeast through Thursday morning. Again if there is any change to snow in some part of the south it would be during this period. This is what models are showing for snow within that time frame (if it even happens). Based on the latest trends and the track further southeast, I think the snow threat has really diminished and I expect we get out of this without any shoveling.

No matter what, with periods of rain and gusty northeast winds, Wednesday is not going to be a banner day to be out and about. Winds have the potential to gust in excess of 40 mph as you can see in the graphic from the NWS in the Quad Cities.

Here's the highs the EURO is anticipating. Throw those winds into that air mass and you get wind chills in the mid 20s to low 30s all day. Sorry Leprechauns! 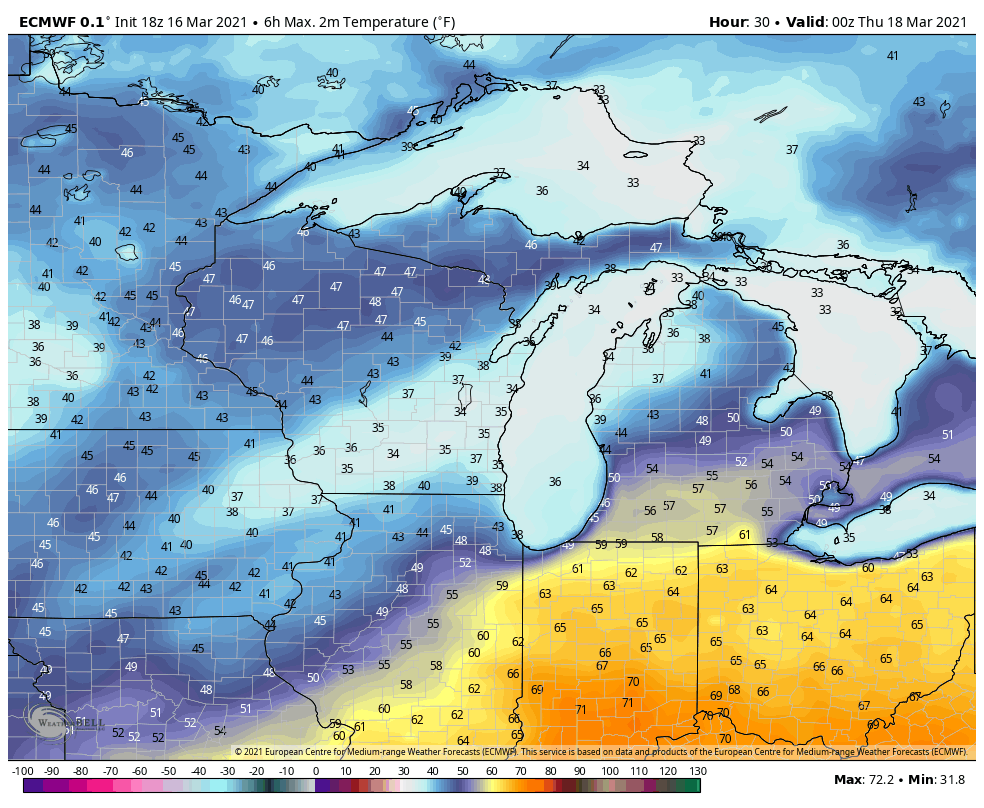 While it won't impact the central Midwest, a significant severe weather outbreak with the potential for several intense tornadoes is anticipated over the SC United States. The Storm Prediction Center has a a rare high risk outlook in place for what it calls a major severe weather outbreak. If the instability is realized this has the potential to be destructive and deadly day for out neighbors down south. Let's hope not.

With that, I call it a wrap. Roll weather...TS

TURNING THE FAUCET BACK ON....