STORMS BACK IN THE FORECAST...

A bubble of high pressure passed over the area Tuesday bringing nice weather back to the region. Sunshine was finally filled our skies, temperatures were warm but below normal, and humidity was moderate. You can't ask for a whole lot more than that in mid-July.

Conditions are already in the process of changing early Wednesday as another system descends on the Midwest. Thunderstorm chances will be increasing and could be with us through much of Thursday. The threat of severe weather also exists Wednesday, especially in the evening and across the north. The Storm Prediction Center has an enhanced risk of severe storms currently in place north of HWY 30 with a slight risk as far south as I-80.

As with any day with severe weather potential the right ingredients need to be in place at the right time. Wednesday's threat is double barreled with a round of mid-day storms up north and another batch later in the evening. Round two is very much contingent on what happens with round one. If rain cooled air and clouds limit heating and air mass recovery in the afternoon, new storms toward evening (especially across the north) will not be as strong. Generally, no model is good enough to see these mesoscale details with any degree of accuracy so until we know how things play out earlier in the day it will be tough to know what potential exists towards evening.

Wednesday's set-up looks to have two potential outcomes. Here's the options in the table through our best hi-resolution models designed for this type of environment.

Based on the HRRR, a convective allowing model, this is how the day plays out. Again, this is not a sure thing but its one of the best short term models and it seems like a plausible solution.

8:00AM Things are warm and quiet. Storms are just beginning to enter some of my northwestern counties.

3:00 PM A line of storms is sweeping (or has swept) across my far northern counties. Depending on the cold pool that develops further west in the morning, these storms could pose a damaging wind threat north of HWY 30 as they encounter instability that's grown in the morning hours. Across the south a cap is in place restricting storms there.

Here's the CAPE (instability) the HRRR shows at 1:00 PM to fuel the storms. 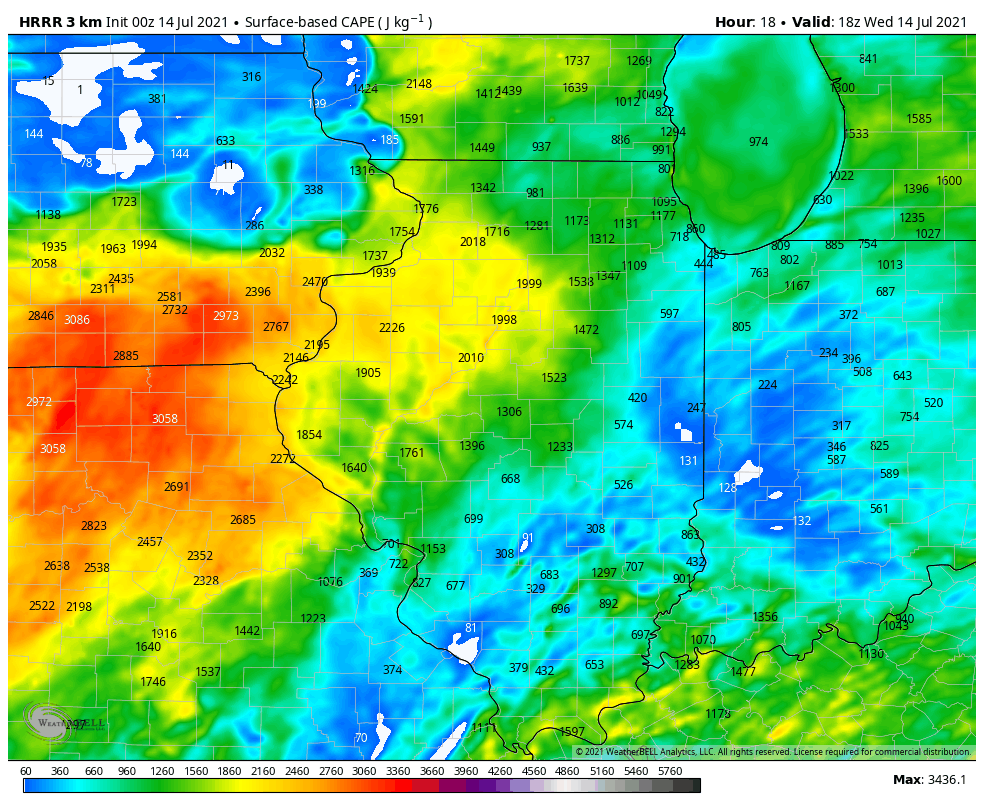 MIDNIGHT: After that round departs, a second short wave arrives that interacts with a cool front and likely an outflow boundary from the day's earlier convection. That should be enough to promote new storm development from central Iowa back into my northern counties come early evening. This is where the amount of instability is in question that could generate more severe weather. Much depends on the strength and duration of the afternoon storms. Whatever happens, the north is the area at risk before the transition to heavy rain becomes a concern.

6:00 AM THURSDAY If the HRRR is correct a convective cluster or MCS rolls across much of the rest of my area during the overnight Wednesday before weakening Thursday morning.

With water vapor levels near 2 inches any storms have the potential to be efficient rainfall producers and some locations are likely going to see heavy rain, perhaps on the order of 1-3 inches. Below you can see the water vapor levels (PWAT's) on the HRRR at midnight. Very rich moisture.

The Weather Prediction Center does have a slight risk in effect for excessive rains across the north half of my area. For a change, this could reach the area which has missed a lot of the rains recently.

There is another scenario that the 3k NAM shows and it is on the table too. It takes the morning convection and weakens it as it approaches and crosses my area. The worst of these storms remains up north. That eliminates the potential for much in the way of storms or severe weather in my area through much of the day. The decaying storms leave an outflow boundary across my central counties which generates differential heating and a strong warm front. Along that boundary winds will be backed and shear will be maximized. Any storm that can go up and get rooted to that boundary will have supercell characteristics and there would be a localized tornado threat. What could very well hold it back is a cap which would suppress storm development until later. Ultimately, the 3K does fire storms that gradually sink south but stay north of I-80 Wednesday night. The severe threat remains near and north of HWY 20 and by midnight the concern transitions to the heavy rain potential discussed earlier. The 3K portrays Wednesday's weather this way.

8:00 AM As with the HRRR, scattered storms are trying to enter some of my western counties.

3:00 PM Most of the storms have dissipated in my area. Warm air aloft is building creating a cap to stifle storms at this point.

MIDNIGHT Active storms are rolling across northern Iowa into Wisconsin. The cap has held and storms have avoided much of my area.

6:00 AM The storms up north have created a cold pool and effective outflow boundary which has driven them south to about I-80 where they will likely weaken Thursday morning.

Thursday the cool front makes slow progress south and current indications are that additional showers and storms will be possible, especially in the central and south. Some strong storms could be found in a few spots but the potential looks less than what exists Wednesday. Again, between what happens Wednesday and Thursday it does appear that most areas have a shot of at least seeing an inch of rain (perhaps quite a bit more in spots). Here's what models are showing for rainfall totals through Friday.

Well, that's a lot of weather but at least you can see the options in front of us. Either one could play out or some sort of combination so there is low confidence on the amount and location of any severe weather (if any Wednesday) but moderate to high confidence most areas will see some decent rains between now and Friday morning. Stay tuned and as always, roll weather...TS