TALK ABOUT A REAL DOWNER...

As a kid, I can remember memorial day weekend as an exciting time. Temperatures were getting hot, school was over, the swimming pools were opening, and little league was starting. My cares were over and life was pretty darn good!

Many moons later a few things have changed and this year the weather will be one of the things that stands out. Look at the temperature departures for the 4 days that constitute the holiday weekend Friday-Monday. The swimming pools, (those that are even open thanks to COVID) will have an empty look unless there's a roof and 4 walls attached. This just makes me mad.

Put the next 5 days together and the combined departures look like this. Are you kidding me. That can't happen to the unofficial start of summer! What a downer.

If it's going to be bad, I always like to get the worst of it out of the way as soon as possible. That's going to be the case as Friday just looks like a very poor day. All the guidance I look at has daytime temperatures in the 40s. This is the GFS Friday evening.

To give you an idea how ridiculous that is, here's the precise temperature departures which are running about 30 degrees below normal. Highs in the mid 40s would be more typical of March 10th. That is sick.

Going a step further, what would Memorial Weekend be without Frost! Yea, you heard me. Prospects are certainly there with the GFS depicting lows Saturday morning that in a few spots in NE Iowa are touching 32. Most areas are in the low to mid 30s, certainly cold enough for scattered frost on the corn sprouts.

The NAM is especially concerning showing widespread lows of 30-32. In the valleys of SW Wisconsin a killing hard freeze is shown with upper teens to mid 20s. Needless to say this is an extreme situation and would be worthy of record lows. Hopefully this solution does not materialize anywhere.

You can see the dip in the jet stream that allows the chill to penetrate deep into the central U.S. 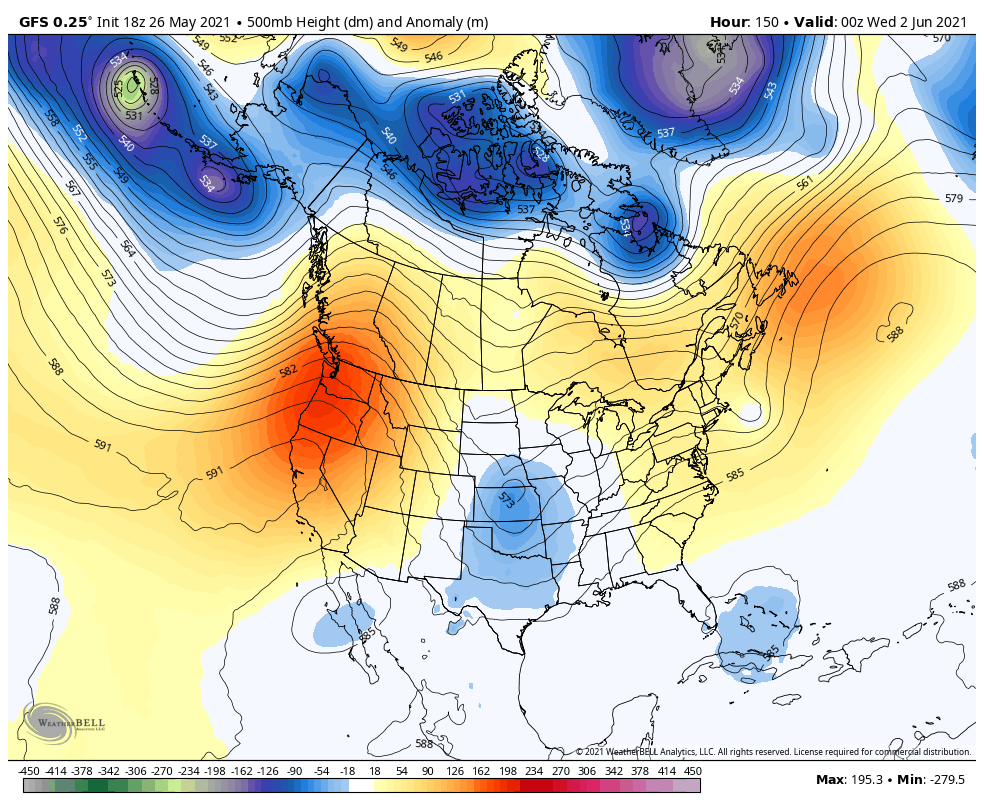 This is also going to scour out any deep moisture for the weekend. However, water vapor remains high Thursday before the chill is established.

Levels go from 1.78" in Burlington, Iowa Thursday (way above normal) to 0.27" Sunday (way below normal). That's what I call drying out.

That change should mean Saturday through Sunday will be dry but far from warm. Monday is not so cut and dry as both the GFS and EURO try to bring clouds and rain into the picture during the afternoon. That would serve to lower temperatures.

Today though becomes a day of transition as colder air arrives bringing rain and in some parts of the south thunderstorms are even possible. SPC now has a risk of severe storms closing in on the area just south of I-80

This part of the forecast is very challenging as mesoscale convective details will play an important role in how the overall set-up evolves. The driving force will be what's left of a Wednesday night thunderstorm complex (MCS) that pushes into the area Thursday. It should be in a weakening phase early but if some heating can reach up to I-80, re-intensification is possible in the afternoon. If so, bowing segments are possible in the convection that could produce damaging winds. The most likely area for this to occur is south of HWY 34. Even if the thunderstorm winds fail to materialize, gravity waves from a wake low may lead to gusts over 40 mph in many areas. Wind of some degree is going to be a factor.

My feeling is that unless surface based instability can advect further north into the area than anticipated, most of Thursday's rain will be stratiform and only my southern 1-2 tiers of counties would be at risk from any severe weather. Until we see how things evolve later Thursday morning we really won't know the full extent of the threat, if any.

We do know that there will be a sharp temperature gradient as cooler air slowly presses south during the afternoon. The north never really gets into any warm air and temperatures start in the 50s and fall into the 40s by evening. My central counties to about HWY 30 may reach 60 before the crash occurs late afternoon. The far south could manage highs of 70 or better, especially with any sort of sunshine, however brief. Here, the change to sharply colder readings holds off until early in the evening. At 3:00 pm the NAM shows this contrast across the region.

The next issue in question is where and how much precipitation falls? Again, a lot of this is tied to the MCS and how it impacts the track of the surface low. It seems as if the potential is there for two heavier bands of rain sandwiched around lighter amounts in the middle.

A northern band would be tied to the mid level circulation or deformation band north of the track of the surface low. A southern band would be more in line with the warm front and triple point that lays out in the far south. Any shift north or south in the track of the system would alter the position of the two bands so there is still low confidence as to how this plays out. As you will see in the rainfall forecasts there are two camps on the table. The EURO, GFS, and 12K NAM are in one and depict some healthy rain amounts in my central counties.

The hi-res convective allowing models such as the 3k NAM and HRRR have a dry slot cutting through my central counties which I assume is tied to subsidence associated with the MCS tracking E/SE in the morning. That drastically cuts rain totals in the central part of my area. That is a real possibility but the truthright now is still blowing in the wind. Here is the 3k NAM and HRRR rainfall totals.

Any lingering showers will come to an end Friday morning and after that conditions will remain cool and dry through Sunday. Highs Saturday should be close to 60 and Sunday readings inch closer to the mid 60s. Memorial Day is still looking questionable as models have reverted to rain chances later in the day. Depending on how soon clouds and precipitation arrive, temperatures could again turn cooler with highs of 60-65. There's still quite a bit of doubt regarding Monday's weather. Whatever happens, Saturday on conditions will be far better than the wind driven 40s of Friday. We'll take what we can get, after all any loving is better than no loving at all. Roll weather...TS