THE ARCTIC HOUNDS ARE ON THE LOOSE...

Thursday's fast moving winter storm did what was expected and that was bring a wind driven snow that was followed by sharply colder temperatures and bitter wind chills. Here's the snowfall reports that I have in so far.

This was the official forecast.

At the same time I endorsed the idea of heavier amounts in eastern Iowa as well as in places further south closer to HWY 34. I also mentioned a few 6" totals NW of the Quad Cities. All of my thoughts verified. You be the judge, we all did out best.

With this latest storm much of my area near and north of I-80 has experienced 30 to 45 inches of snow which in many spots is more than the entire seasonal average.

Going forward we now have the concern of frigid weather to go along with the issue of more snow.

Dealing with the cold first, it's going to come in waves tied to clippers that bring progressively colder temperatures after each successive pass. Lows will be a few degrees below zero Saturday and by Super Bowl Sunday should be in the range of 10-15 below. Wind chills Sunday morning will be at serious levels 30 to 35 below.

The core of this Arctic air next Friday is situated near a massive 1055mb high that is ridging from the Yukon all the way to the tip of Texas. This is a massive cold dense air mass.

What it all means is that the bitter cold is going to be around for 10 days and the worst of it is not shown until late next week in the period Feb. 12-15th. In the meteogram below the GFS shows a low of 28 below in Cedar Rapids February 14th, (now that's a lovely Valentine's day)! That would break records and would be within striking distance of the all-time coldest temperature in CR of 30 below. With the deep snow cover in place and more powder to come, we certainly have a chance of a getting a night with at least a 25 below.

The EURO only goes to -24 but it shows the cold holding on longer and more intense during the day with sub-zero highs 4 straight days. The potential is there for 100 consecutive hours of below zero temperatures. Let's hope that changes in coming days! I do think we could see 8 or 9 consecutive mornings below zero.

For some perspective, these are the temperature anomalies for February 13th on the EURO. Some as much as 48 degrees below normal. That is something you never want to see, especially at the coldest time of the year.

Here are some of the forecast wind chills of which a few are down to 50 below. That's about as low as they go around here, once in a blue moon minus 60.

The Climate Prediction Center shows us residing in a high risk of excessively cold temperatures at that time. 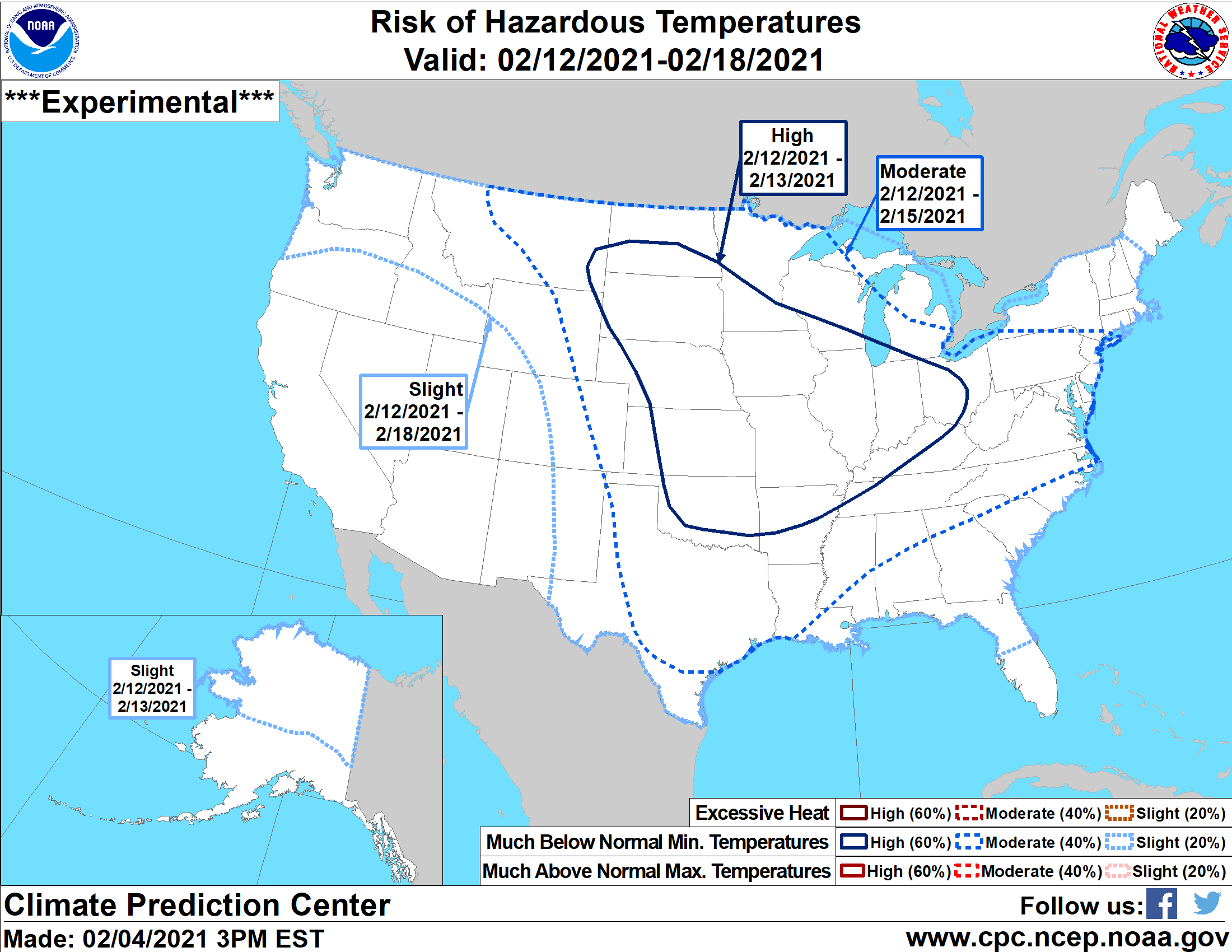 Enough about the cold. The next item is more snow. As mentioned, this would be tied to fast moving clippers that would be efficient snow producers with ratios of 20:1 or more. The question is how far into the Arctic boundary will the moisture be able to get. The EURO is a bit further north than the GFS but either way you slice it, the further south you get towards the increased moisture the better the chances of experiencing any fluffy powder. Right now I see three clippers that have a a shot to produce accumulating snow. However, the pattern is really noisy with lots of energy and the strength and position of the short waves is tough to see and time with much accuracy. None of the systems is especially large, generally producing snowfall totals of 1-2" focused mainly on the area south of HWY 20, especially near and south of HWY 30. The first of these is due in Saturday. I won't even try and break these out yet but between the three disturbances spanning Saturday through Monday other than to say 6 or more inches is possible, especially near and south of HWY 30. Here are what the models currently show. This is just raw guidance showing the latest trends as of late Thursday night.

So, with the Arctic hounds baying and more flakes congregating, I call it a day. Roll weather...TS