THE HAMMER COMES DOWN ON SUMMER...

Tuesday was the 13 year anniversary of the Parkersburg EF5 tornado. It's a day I always remember for the twisters brutal display of power, devastation, and death. The storm carved a 40 mile path that neared a mile in width at its peak. Accompanied by winds of 210 mph From Parkersburg to New Hartford, it exhumed everything in its way becoming one of the worst natural disasters in Iowa history. To stand amidst the carnage of the storm was one of the most daunting and surreal moments of my life. Words can never capture the unyielding scope of the violence. I can still hear the drone of chain saws. No trees, only piles of homes, plywood signs erected to identify the remains of streets. The destruction so complete that people who had lived in Parkersburg a lifetime were unable to distinguish their house from their neighbors. My memories are as fresh as the scent of the splintered lumber and trees that filled the air. It is a miracle that only nine lives were taken.

98 percent of the tornadoes 43 mile path occurred over open country. However, you can see the storm narrowly missed the heavily populated areas of Cedar Falls and Waterloo. The Waterloo Airport on the NW side of the city did reported 97 mph winds as the twister passed a few miles north.

EXTREME PLANET RANKED THE TORNADO THE 11TH STRONGEST IN UNITED STATES HISTORY BACK IN 2012.

THE HAMMER COMES DOWN ON SUMMER...

The weather story today will be one of nice conditions thanks to a cold front which will drop humidity and lower temperatures a few degrees. Throw in some sunshine and temperatures of 76 to 80 and bingo, you're in business.

Starting with Thursday, models have been in good sync depicting a wave of low pressure passing along the stalled cold front situated near the Iowa Missouri border. Ample moisture and forcing will generate a large swath of rain that swings east along with the low. North of the front, (which includes the majority of my area from HWY 34 north), brisk east winds and afternoon rain will keep temperatures in the 50s most of the day. Some spots near HWY 20 may fall into the upper 40s!

South of HWY 34, readings should make the low to mid 60s and there may even be a few thunderstorms. However, the greatest instability is expected to remain just south of my region so severe weather is not anticipated to be much of an issue due to the elevated nature of the storms. Here and there some small hail and gusty winds are possible. A greater threat will be the potential of some locally heavy downpours. SPC shows an enhanced risk of severe weather in Missouri.

As for rain, models are depicting totals that look like this through Friday. Some of it occurs Tuesday night as the cold front passes. The more widespread and more significant amounts are expected Thursday and Thursday night.

There will likely be some lingering showers Friday, especially in the morning. What will really get your attention though are the temperatures. Under low clouds and brisk winds, highs on a number of models remain in the upper 40s to low 50s. Get a load of this. The GFS shows temperatures Friday morning 50 or below in the northern half. 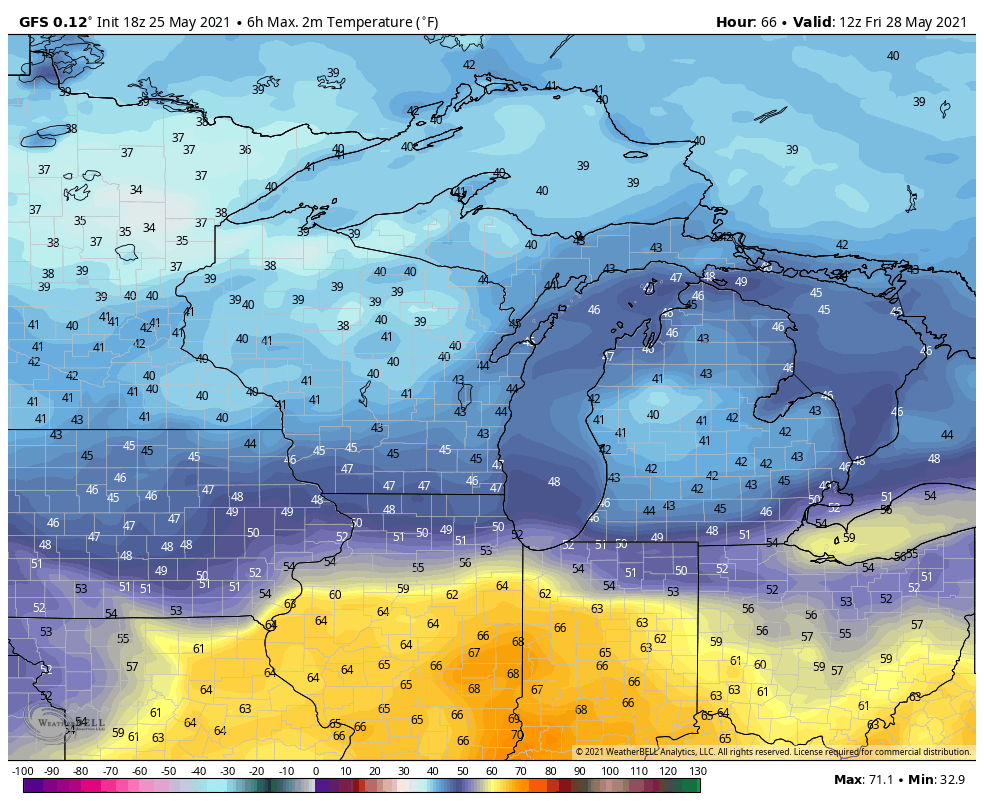 By evening, readings have crashed into the 40s in all areas. Low 40s north.

That may be a bit extreme but it's going to be quite brisk and a lousy way to start a holiday weekend. In fact, to give you an idea how bad, these are the temperature departures on the GFS Friday evening...27 to 30 degrees below normal. Good grief!

Saturday, we should be able to salvage some sunshine but I doubt highs will get much better than the low 60s (maybe mid 60s far south). Sunday, partly sunny skies should cover it and if indeed we get a full day of sun highs could punch the mid to perhaps upper 60s. That's still pretty pathetic.

Memorial Day itself is up for grabs. The GFS has clouds and rain returning by late afternoon with highs upper 50s to low 60s. The EURO is dry and mostly sunny with highs in the low 70s. The EURO had rain yesterday but has slowed that system today and dramatically improved the look. My hope is the GFS is too fast and overdone on the clouds and rain. I'm leaning towards a compromise here but want to stress confidence is low at best. My "compromise vision" is for a sunny start Monday with an increase in clouds later in the day. It remains dry through Monday and highs reach the mid to upper 60s. Fingers and toes crossed on that.

Okay, that was a lot of weather. Hope you made sense of it and can find something redeeming. After today, things are going to get ugly the rest of the week. Roll weather...TS