We were in the steamer Tuesday with heat index values in the range of 100-107. Fortunately, debris clouds from storms up north tempered the heat on the thermometer. Had we experienced full on sunshine it would have been exceptionally brutal. In fact, highs from Dubuque to the Quad Cities and points east of the Mississippi did not even get out of the 80s. Humidity was the real key to the feel of the day with dew points that pushed 80. Here's some late day heat index reports.

You can see rain was tantalizingly close. A few spots in the NE did see some brief downpours but amounts were light and most of my area escaped the needed rain. 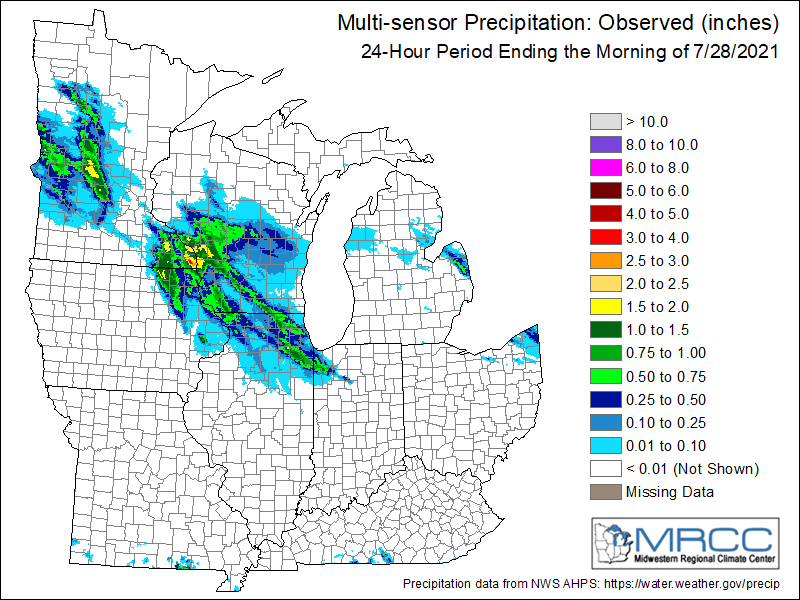 This chart shows precipitation departures since January 28th. It's really interesting as you can see the stark contrast in the have's and the have not's. In southeast Iowa near Mt. Pleasant there's a surplus of 10.3". Just west of Waterloo I see a deficit of 10.4". That's a 20" range in roughly 150 miles. Quite amazing! 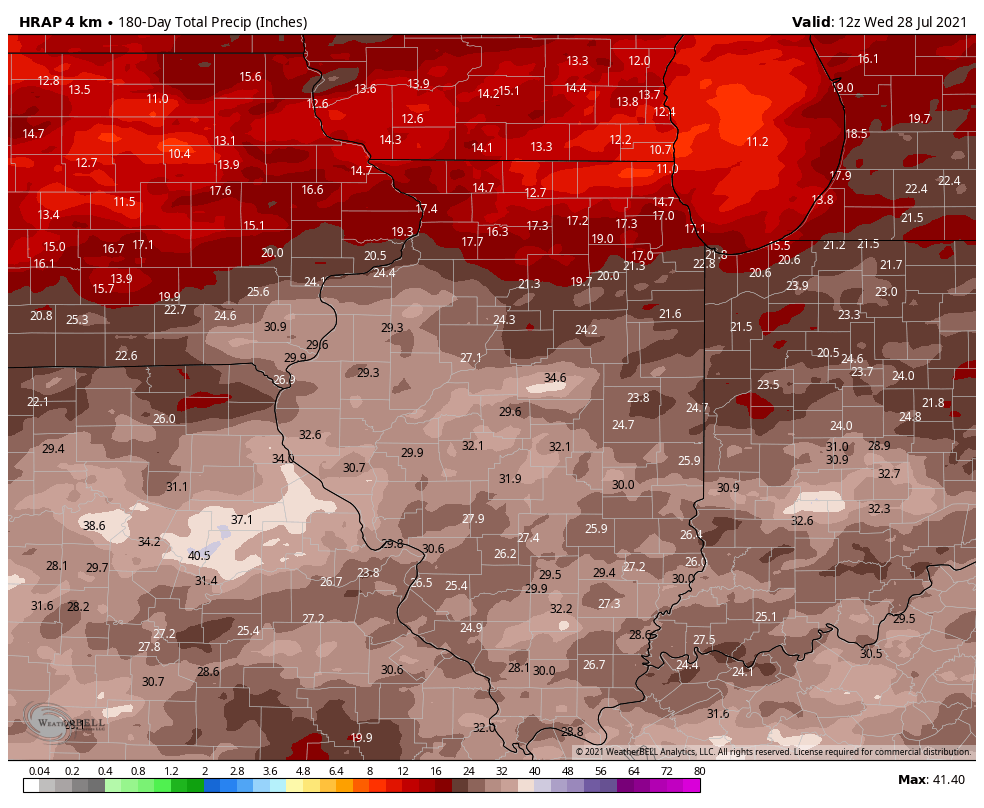 For many in my area Wednesday was the 13th consecutive day with no measurable rain. Thursday there are rain chances early and again later in the day. The morning prospects are mainly over the northeast half as a cold pool from intense storms in Wisconsin backs into that area. By daybreak Thursday some robust storms may occur in that area. As I write this most of the hi-res guidance keeps the activity just out of my region, more in SW Wisconsin and NC Illinois. I seriously doubt that and think the storms and convective debris will make it further into my area by daybreak Thursday. I have no idea how far the penetration will be but I could certainly see some gusty winds and downpours, especially north of a line from Manchester to about the Quad Cities (Clinton more likely) and Princeton, Illinois by Thursday morning.

Later in the afternoon, a cool front slips into my southern counties where it will interact with what's left of Wednesday's heat and humidity to potentially fire storms there. Right now the area most at risk is far SE Iowa and WC Illinois, mainly south of HWY 34. What happens with the morning convection will impact how the late day set-up evolves. No way to know on that until later Thursday. SPC does indicate a slight risk of storms in that part of my area which looks reasonable.

In the graphic below you can see what the convective allowing models are showing for total precipitation through Thursday night. Notice one band to the northeast Wednesday night and early Thursday and the other near the front in the far south Thursday evening. Again, my feeling is there's going to be more than what's showing further west in my area, especially the NE half of my area near and NE of the Quad Cities.

On the bright side, cooler and drier air arrives behind the front and improvement will already be evident as early as Thursday afternoon in the north while the south will endure another very sticky day with heat index values again in the range of 97-102, especially south of I-80. The NWS keeps the heat advisory out for these areas through 8:00 PM Thursday evening. This may be a bit far north as overnight storms may send a cooling outflow boundary further south than what models are indicating.

Getting back to the cooler weather that's coming, I wanted to show you the recent trends in temperatures at the NWS office in Davenport. Notice this entire week has been in the 80s when models last week were showing low to mid 90s. In fact the EURO had highs in the 90s for 9 days right on through the coming weekend with one day at 100. I just could not see that trend with the MJO in a phase that was not conducive to it. The MJO was a very helpful seeing the cooler outcome that's coming well before the operational models. 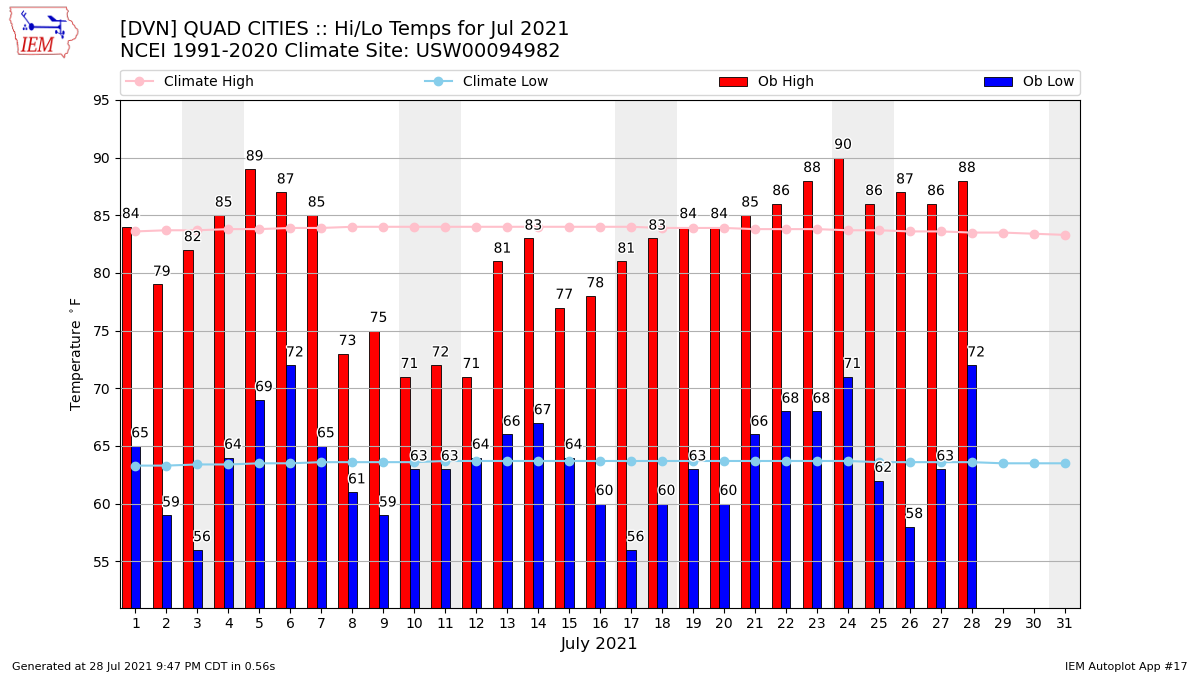 I've also been anticipating a significant pattern change to cooler weather in the long term and that seems to be coming to fruition. Just look at this buckle in the jet late Sunday. If that were January we would be wearing the big parka.

After today, the 10 day temperature departure looks like this through August 8th. The month will be getting off to a very comfortable start

As far as rain goes, I wish there was better news here, especially in our part of the Midwest. This is the 10 day rainfall departures. Overall, it appears to be more of the same for many of us in the rainfall department if we don't scare up anything in the next 12 hours. Some models do indicate a wetter solution to start the weekend but I also have reservations about how far north that gets. I give it another day before I tackle that issue.

I guess that's a good place to cut it off for now. Time to switch gears. Have a fine day and roll weather...TS