WHEN THE BEAR WAKES IT WILL BE HUNGRY...

With the dominance of cool temperatures and dry air instability has been essentially non-existent this year. As a result, so has severe weather and thunderstorms. So far the NWS in Des Moines has not issued a single tornado warning and only 3 severe thunderstorm warnings in 2021. That easily breaks the previous record of 9 such warnings through May 5th set in 1987, 1988, and 1993. Below you can compare where we stood May 5th to all years going back to 1986.

This is an incredibly low figure considering we are approaching the peak of severe weather season which traditionally occurs in May and June. See the graph below depicting the frequency of thunderstorm warnings by month since 1986.

Just because it's been quiet doesn't mean it will stay that way. In 2008 a cold spring kept severe weather limited deep into May. At this point in the month only 46 thunderstorm and tornado warnings had been issued. (see below) 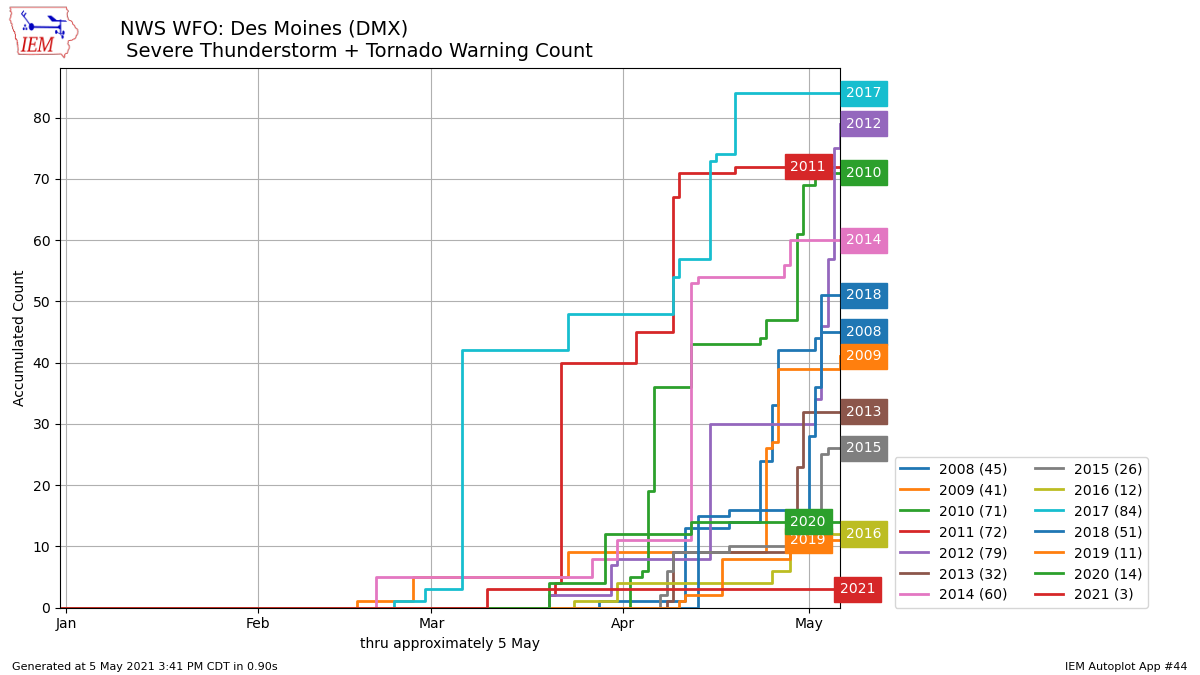 However, in late May conditions became favorable for storms that lasted well into June and a deadly severe weather season ensued. After May 5th more than 600 tornado and severe thunderstorm warnings were issued (the most in the past 31 years). That resulted in 13 deaths from tornadoes, 9 of those in the violent Parkersburg EF5 storm the afternoon of May 25th. The first EF5 to occur in the state in 40 years.

It's my belief that springs with late arriving warmth and moisture contribute to an increased severe weather threat, especially in years such as this where La Nina conditions prevail. (2008 was also a La Nina year). To date, the strong westerlies of of our current La Nina has kept heat and moisture contained to the southern U.S. But ultimately, summer wins out and at some point the instability will reach the central Midwest. With cold air still within reach into May and June, it will likely tighten a strong baroclinic boundary and the risk of severe weather along it as it gradually moves north.

I also feel the enhanced westerlies of the La Nina may slow the northward progression so that once a stormy pattern is established, it can be sustained for a prolonged period of time. Again, that's precisely what happened in the big severe weather year of 2008. There was a three week stretch May 25-June 9th where severe thunderstorms occurred on a daily basis. From late May to the end of June, 2/3rds of the years 105 tornadoes were found.

I do not know how this years severe weather season will evolve. However, I'm in the speculation business and based on analogs and pattern recognition I'm of the mindset that this year is still slumbering. When the bear wakes it will be hungry and there will be a price to pay. Who pays and how much is the question that hides behind the door?

Whatever happens, the bear will sleep for at least another 10 days as cool dry air continues to limit instability. After that, all bets are off. Roll weather...TS