The writing was on the table yesterday that severe thunderstorms and even tornadoes would roam the Midwest. If you saw my post yesterday I made note of the fact that just 15 tornadoes had touched down in Iowa this year. (55 is the average). Well, the law of averages is powerful and at least 28 tornadoes filled the skies of Iowa Thursday bringing the yearly total to 43. 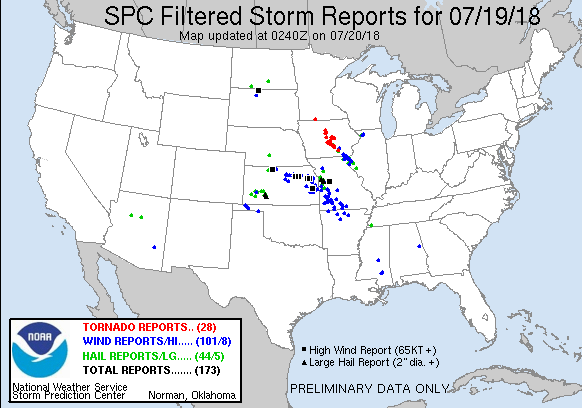 Our models did a great job of pinpointing where the strongest storms would occur. Here's the significant tornado forecast from one of our high resolution models nearly 24 hours before the twisters. That's pretty much spot on!

The strongest tornadoes hit Marshalltown and near the town of Pella where extensive damage was reported. Damage survey crews will be in on Friday to determine the strength of the tornadoes. Based on what I've seen it would not surprise me if both storms were EF3 which would equate to 150 mph winds. Here's a shot of the Marshalltown tornado entering the town.

Here's a sounding of the atmosphere on the RAP (a weather model) just before the Marshalltown storm. It is a tornado sounding with a nicely curved hodograph. Surface winds are southeast and upper level winds west northwest perfect for July tornadoes. Cloud bases were also low with an 80 degree temperature over a 72 degree dew point.

Remarkably (despite a wide path), only minor injuries were reported in Marshalltown. However, damage was extensive. Some examples below.

Here's a classic shot. It's what's known as a debris ball. As the twister was moving through Marshalltown it was kicking up trees, cars, chunks of homes, throwing anything it can into the air. The debris is highly reflective and the radar clearly shows the debris ball over the city. You know you have a dangerous and potentially deadly storm when you see a signature like that. A tornado emergency warning was issued by the NWS

Another tornado damaged homes near Bondurant, Iowa. (Jack and Sherry this one's for you). Here it is.

Last but not least, a shot of just how beautiful weather can be. Mammatus clouds toward sunset from Travis McBride.

After Thursday's storms the pattern looks quiet going into the weekend. Temperatures will be cool and there could be some spotty showers Friday. Nothing heavy or widespread. Have a great weekend and roll weather...TS